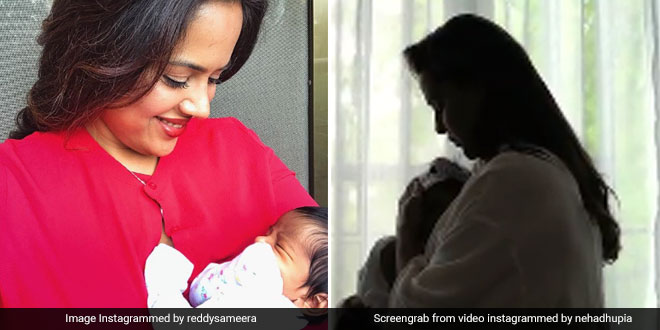 New Delhi: Breastfeeding, a natural process of a mother feeding her child comes with its share of taboos, myths and sheer lack of awareness. To protect, promote and support breastfeeding, the World Breastfeeding week is celebrated every year from August 1 to August 7. Lending her support to the noble cause actor Sameera Reddy, who recently became a mother for the second time, shared a photo of with her daughter Nyra on Instagram, and wrote a long message to new dads, drawing attention to breastfeeding.

In her post, Sameera Reddy asked new fathers and loved ones to be supportive and encouraging towards the new mother. She shared how a mother’s mood and state of mind can affect breastfeeding, which is the only way a child gets nutrition and food for the first six months.

Sameera captioned the photo as,

New dads & loved ones listen up! It’s World Breast feeding week and this post is for you to know that you can be the biggest support and encouragement to a new mom! A mother may be depressed, lacking in confidence, worried, or stressed and it affects breastfeeding. These factors do not directly affect her milk production, but can interfere with the way in which she responds to her baby. This can result in the baby taking less milk, and failing to stimulate milk production. So be there for her.

In an elongated caption, Sameera touched upon the reasons behind low milk production and urged that mothers struggling with breastfeeding should neither be shamed nor pressurised in anyway. She added,

I would also like to give a shout out to moms who have struggled with low milk production. This could happen due to a pathological reason including endocrine problems or a host of other factors. A few mothers have a physiological low breast-milk production, for no apparent reason, and production does not increase when the breastfeeding technique and pattern improve.

Also Read: Breastfeeding Can Prevent Around 1 Lakh Deaths Due To Diarrhea, Acute Respiratory Infections And Pneumonia

She signed off by saying, “We need to support all mothers and show love and respect.”

Sameera has always been vocal about breastfeeding. Earlier in July as well she shared a post, in which she wrote that breastfeeding is a natural process. She said, “I finally am exclusively feeding her but the whole process is something that should be natural but it’s made to be very stressful.”

Just like Sameera, actor Neha Dhupia too called for support through her latest campaign ‘freedom to feed’. Sharing a video on Instagram, Neha launched the campaign and wrote “#freedomtofeed – an initiative by Neha Dhupia. Let’s start a conversation… as mothers we need #freedomtofeed …”

In a video, Neha spoke at length about her relationship with Mehr, her daughter and talked about her experience of being a mother. In between, she recalled an instance where she was travelling with Mehr all by herself and had to feed Mehr. She recollects,

One of the most challenging parts for me was exclusively breastfeeding Mehr for six months and I still continue to do so. It makes you realise the importance of a support system and sometimes the lack of it. For instance, I remember I was travelling with her once all by myself and I was on a flight and I knew that she needs a feed because I could hear her cry and as a mother you know when your baby wants. I remember standing up in the plane and telling everyone in the cabin ‘listen, I am gonna be using the washroom for about 15 minutes and if anybody would like to use it before me. Everyone knew that I was taking my daughter in and what was actually going on.

While she was in the washroom feeding Mehr, she was hoping that the seat-belt sign does not switch on before her little one finishes her feed. Before signing off, Neha stressed upon the fact that women need not to be apologetic for doing something (breastfeeding) so right and emphasised on creating more noise around it.

Every year the World Breastfeeding Week is celebrated from August 1 to August 7 to encourage breastfeeding and improve the health of babies around the world. It commemorates the Innocenti Declaration signed in August 1990 by government policymakers, WHO (World Health Organisation), UNICEF (United Nations International Children’s Emergency Fund) and other organisations to protect, promote and support breastfeeding. The theme for this year’s breastfeeding week is ‘Empower parents, enable breastfeeding: Now and for the future!’

World Breastfeeding Week: How Superstitions Act As A Barrier For Women To Breastfeed