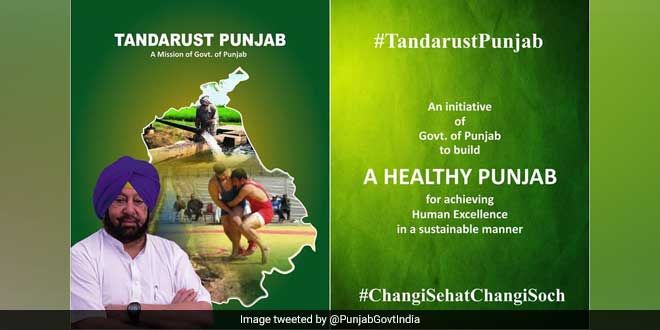 New Delhi: On World Environment Day, the Punjab government launched a health programme named ‘Tandrust (healthy) Punjab’. Under this mission, the Punjab government will have a focused and integrated approach by involving all the stakeholders to work towards creating a ‘Tandrust (healthy) Punjab’. Also any attempt to pollute the air, contaminate water and food adulteration will be seen as a crime against humanity and the state. Holding every individual responsible for saving the state and its environment, Punjab Chief Minister Captain Amarinder Singh called upon industry to take appropriate steps to check the pollution caused by their factories, while stressing the need for curtailing paddy cultivation in order to save the fast depleting water resources.

Reiterating his government’s commitment to ensuring clean water, the Chief Minister while launching the programme at Indian Institute of Science Education and Research, Mohali, said that throwing of waste into the rivers by industry was not acceptable.

The Chief Minister took to Twitter to urge everyone to support this programme to make Punjab India’s healthiest state. He said: “I’m sure that this endeavour will go a long way in realising my dream of a healthy Punjab.”

Great energy and enthusiasm at the launch of Mission #TandarustPunjab here at Mohali. I’m sure that this endeavour will go a long way in realising my dream of a healthy Punjab. #ChangiSehatChangiSoch #WorldEnviromentDay pic.twitter.com/vbnXoRHVyU

Talking about the fast depleting ground water level, the Chief Minister underlined the importance of introducing crops that use less water, warning that “if we don’t act now, things will become extremely bad for the state in the times ahead.”

The Chief Minister also said that throwing of waste into the rivers by industry was not acceptable. “It was the industry’s responsibility to control water pollution by ensuring that no untreated water or effluent is thrown into the rivers,” he stressed. Captain Amarinder Singh also expressed serious concern about the pollution of rivers by the cities, which he said needed to be stopped immediately.

The Chief Minister exhorted the people to go back to planting traditional trees like Kikar, Neem, Berry, to name a few, instead of Poplar and Eucalyptus to protect the environment, and cited the example of Dubai where cutting the native tree was an offence.

He even appealed to every household in the state to plant at least one tree to contribute to protection of the environment for the coming generations. At the same time, he called for judicious use of pesticides to save the environment and asked Punjab Agricultural University to intensify its efforts to educate farmers about the hazards of pesticides and adopt organic farming.

On the occasion, the Chief Minister also launched ‘Tandarust Punjab’ booklet, as well as ‘Ghar Ghar Haryali’ app for providing information about saplings available with the Forest Department as per season.

The Chief Minister also formally launched the district administration’s ‘Mission Green Mohali’ initiative to plant one crore trees in three years. Speaking on the occasion, Forest and Wildlife Minister Sadhu Singh Dharamsot described the mission as a major initiative in the context of the growing environmental pollution. He announced that the forest department would provide one lakh saplings of sandalwood to farmers for planting at the boundaries of their fields. He said that department had set a target to plant eight crore saplings of various kinds across the state.

Environment Minister O P Soni said that no state or nation could progress and prosper in the absence of a clean and green environment and the Mission ‘Tandrusat Punjab’ would go a long way in enabling such an environment in Punjab. He urged the Chief Minister to take stringent steps to check inflow of untreated water and effluent into the rivers.

Pleasure to meet Padma Shri recipient Baba Sewa Singh ji an eminent social worker and environmentalist, who has contributed immensely towards restoration of the environment across the country, at the launch of #TandarustPunjab #ChangiSehatChangiSoch #WorldEnviornmentDay pic.twitter.com/3p7GDd2nxB

In order to make Punjab the healthiest state, the Padma Shri Baba Sewa Singh Khadoor Sahib called upon the people to take a pledge to save water, air and soil of state. He also advocated the need to shun the practice of throwing sacks of waste into the rivers and to stop stubble burning.