New Delhi: Every year April 7 is marked as the World Health Day to raise awareness about health issues that need attention. The day is celebrated with a unique theme every year and the theme for World Health Day 2021 is ‘Building A Fairer, Healthier World for Everyone’. This theme is in line with the gaps in the health systems that the current COVID-19 pandemic has highlighted. COVID-19 outbreak has shown that the inherent inequities in society, be it economic or social in nature, have a direct bearing on the most vulnerable people, whether it is in terms of accessing the healthcare facilities, cure or getting vaccines.

Also Read: World Health Day 2021: The Day Dedicated To Building A Fairer, Healthier World For Everyone

As World Health Day 2021 is celebrated, here are some of things to know about India’s Healthcare infrastructure and why health needs to be given highest priority:

According to the economic survey 2020-21, one doctor in India caters to a population of 1,456. This is way above the World Health Organisation recommendation of 1:1000 doctor to population ratio. The National Health Profile India, 2019 data suggests that only 11 of India’s 28 states meet the WHO recommendation of standard doctor to population ratio. According to the National Health Profile India 2019, states with the highest shortfall of doctors were Uttar Pradesh, Chhattisgarh, Odisha, and Madhya Pradesh.

World Health Organisation states that in India, nearly 5.8 million people die every year from Non-Communicable Diseases (NCDs), like (heart and lung diseases, stroke, cancer and diabetes. In other words, 1 in 4 Indians face the risk of dying from an NCD before they reach the age of 70.

Status Of Malnutrition In India

One of the startling revelations in the first-phase data of the National Family Health Survey (NFHS) 5 for the year 2019-20 released by the Union Ministry of Health and Family Welfare recently, showed that several states in India have either witnessed meagre improvements or sustained reversals in child (under 5 years of age) malnutrition parameters such as child stunting; child wasting; share of children underweight and child mortality rate. The report highlighted that out of 22 states, 16 recorded an increase in underweight and severely wasted under 5 children during the first phase of the NFHS report.

Similarly, 13 states and UTs of the ones surveyed registered a surge in the percentage of stunted children (low height-for-age) under five years of age in comparison to NFHS 4 (2015-16).

Child wasting reflects acute undernutrition and refers to children having low weight for their height. Instead of bringing it down, states such as Telangana, Kerala, Bihar, and Assam as well as the UT of J&K have witnessed an increase. Others like Maharashtra and West Bengal have remained stagnant.

Along with undernutrition, the NFHS 5 report further showed that almost all states and UTs have recorded a drastic rise in the percentage of children under five years who are overweight. The trend is most likely due to unhealthy food habits, reduced physical activity, as per the Union Health Ministry.

The NFHS-5 data highlighted that big states and Union Territories like Maharashtra, Gujarat, Mizoram, Tripura, Lakshadweep, Jammu and Kashmir, and Ladakh, have shown an increase in the percentage of obesity among children below five years of age, in comparison to NFHS-4 conducted between 2015 and 2016.

About 13.4 per cent under the age of five were found to be obese in Ladakh which was the highest among the 22 states and Union Territories surveyed, followed by Lakshadweep at 10.5 per cent, Mizoram 10 per cent, Jammu and Kashmir, and Sikkim 9.6 per cent each.

The other worrying fact is malnutrition numbers have further worsened in many states from what has been indicated in the phase 1 NFHS-5 survey because of COVID-19. According to the India Child Well-being Report 2020, released in November last year, the disruptive effects of the COVID-19 pandemic have intensified the burden of malnutrition among children in the country, especially from the vulnerable and economically poor families. The report has said that COVID-19 pandemic and the subsequent lockdown has put almost 115 million children at the risk of malnutrition in the country.

HIV and AIDS Trend In India

India has the third largest population of HIV infected in the world, according to National AIDS Control Organization’ (NACO) latest HIV estimates report (2019). India is estimated to have around 23.49 lakh people living with HIV/AIDS (PLHIV) in 2019. The HIV epidemic has seen an overall decreasing trend in the country with estimated annual New HIV infections declining by 37 per cent between 2010 and 2019. However, if we compare it with past data from 2000 to 2011, the overall decline percentage is low. As per NACO’S data, India has had a 57 per cent reduction in estimated annual new adult HIV infections, from 274,000 in 2000 to 116,000 in 2011.

Even though the prevalence of HIV is in lakhs, as such there are no dedicated hospitals for the treatment of HIV/AIDS patients, states the NACO report. Under the National AIDS Control Programme (NACP) of the Government, as on July 2020, there are 570 Anti-retroviral treatment (ART) Centers and 1,264 Link ART Centers.

With India faring badly in most of the common health indicators, yet the spending on healthcare is not adequate. As per the Economic Survey 2020-21, in terms of Gross Domestic Product (GDP) the government spent on healthcare is 1.6 percent of the GDP in FY20 budget estimate a small rise from 1.5 percent in FY19.

Whereas, the last released National Health Profile-2019 (NHP-2019) report said that India’s public expenditure on health continues to remain the lowest globally and established that for the country it will be an uphill task to meet the government’s own target of spending 2.5 per cent of the GDP by 2025 on healthcare.

Immunization is key to child survival, it is one of the most cost-effective ways to protect children’s lives and futures. Yet, more than half of the world’s most vulnerable children miss out on the essential vaccines they need to live healthy lives. Globally, 1.5 million deaths could be avoided if children were vaccinated, as per UNICEF.

In the last two decades, India has made significant progress in improving health indicators, particularly those related to child health. India was certified polio-free in 2014 and eliminated maternal and neonatal tetanus in 2015.

According to the Ministry of Health and Family Welfare, full immunisation implies vaccinating children with BCG (Bacille Calmette-Guerin) which is a vaccine for tuberculosis (TB), vaccines to prevent measles MMR (measles, mumps, and rubella) vaccine and three doses each of polio (excluding polio vaccine given at birth) and DPT (diphtheria, pertussis, and tetanus).

The latest NFHS 5 survey report also highlights the positive progress made by India in full vaccination coverage among children aged 12-23 months. The report stated that the progress was made across 14 out of 17 states and four out of five UTs among those surveyed. 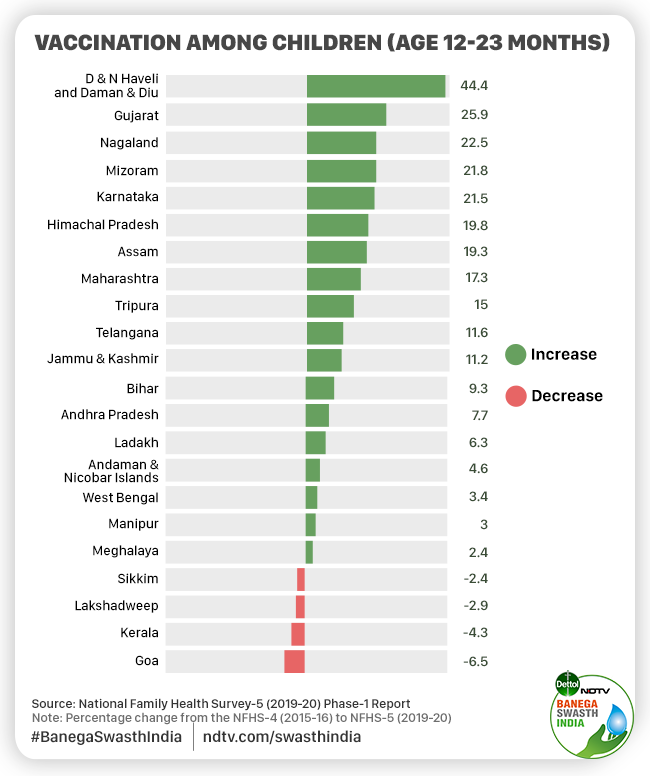