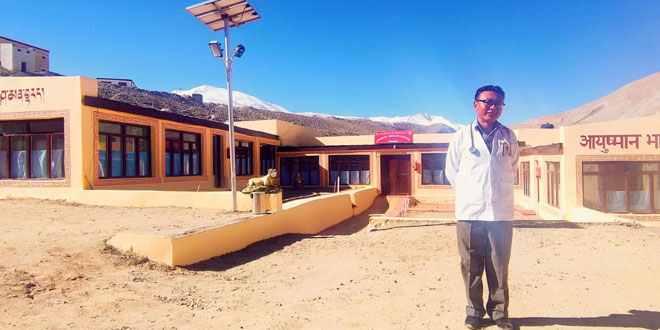 Ensuring health for all, Dr Jigmet Wangchuk converted once a dilapidated PHC into a model health centre in Chushul, Leh

New Delhi: On July 27, 2020, Dr Jigmet Wangchuk, a Medical Officer with over a decade in government service, received his transfer orders from Leh District Hospital to a Primary Health Centre Chushul. With a population of nearly 1,300 people, Chushul is one of the remotest areas of Leh, Ladakh and is around 5kms away from the Line of Actual Control (LAC). The proximity to LAC means even a minute tension at LAC directly affects the people of Chushul. Even the 2G connection service gets disrupted and people have to resort to the BSNL VSAT service set-up at the Panchayat Ghar (house).

On getting the transfer letter, Dr Wangchuk, who hails from Skurbuchan village of Leh, packed his bags and moved to Chushul to head the Primary Health Centre (PHC). To his surprise, he was greeted with a dilapidated PHC that had not had a medical officer for two years. Recalling the shabby state of the structure, 43-year-old Dr Wanhcguk told NDTV,

PHC Chushul was constructed in the early 1990s to cater to the medical needs of the natives of the area and five other villages within a 70km radius. However, back in 2020, it was out of order. The plaster was peeling off from the walls, x-ray machine was dysfunctional, poor state of wards and out-patient departments (OPDs) and the lack of medical equipment was an eyesore.

Though three to four paramedics were posted in each village including Chushul and there was a doctor practising traditional Tibetan medicine, also known as Sowa-Rigpa medicine but until Dr Wangchuk came, there was no doctor for allopathic treatment or to address emergency cases, handle deliveries and provide ante-natal and post-natal care. Paramedics used to provide treatment to the best of their capabilities and in case of further medical assistance, cases were referred to a district hospital situated at a distance of 200kms.

Instead of lamenting his fate for the bare minimum facilities to provide medical treatment, Dr Wangchuk decided to use this opportunity for the betterment of Chushul and change the face of the PHC. Fortunately, the National Health Mission (NHM) under the Ministry of Health and Family Welfare, had earmarked PHC Chushul among many PHCs of Ladakh for an upgrade to a Health and Wellness Centre as per the Ayushman Bharat programme.

For upgradation of PHC, the money was allotted but not released because there was no one to take charge. Secondly, the challenge was to find masons, labourers and painters in the middle of the COVID-19 pandemic. We had a window of two to three months to revamp as winters set in early in Chushul and by mid-October, the water starts to freeze. Also, at that time, due to COVID, people seldom used to visit the facility so, we had time and space to work efficiently and effectively. I encouraged my team and together we got the raw material from Leh and started the renovation process on our own, said Dr Wangchuk who is also an Orthopedician.

Rs. 5 lakh were provided by the government in two installments. From the first installment, Rs. Rs. 50,000 were spent on revamping the laboratory so that basic tests can be conducted. The team purchased a refrigerator to store drugs and reagents for processing and testing samples. The remaining Rs. 2 lakh were spent on renovation.

The second installment of the same amount was used to procure medical equipment like eight oxygen concentrators, two ventilators, 15-20 oxygen cylinders, and a defibrillator – a device used to give high energy electric shock to someone who suffers cardiac arrest.

A lot of equipment were purchased on our request and this has been possible with the support of then Chief Medical Officer and now the Director of Health Services, Dr Motup Dorje and UT Ladakh Administration, said Dr Wangchuk. 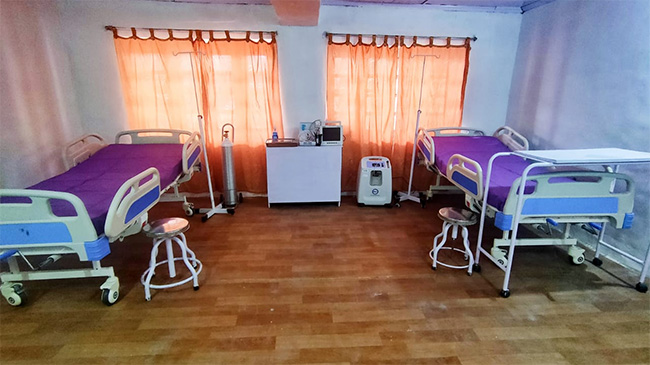 A look inside the Primary Health Centre Chushul, Leh

In early August 2020, the first COVID case was detected through the Rapid Antigen Test in the region and that set the team on alert. On rigorous contract tracing and testing, more cases were reported and the task was to manage all positive patients within Chushul only.

I taught paramedics how to wear personal protective equipment (PPE) kit, take samples and conduct tests. We managed the caseload in two ways – for asymptomatic and mildly symptomatic patients or those who don’t have an isolation facility at home, we created an isolation centre with 30 beds in a hostel of a government high school. Cases that needed medical treatment like oxygen, medication, and regular monitoring were admitted to a 12-bedded COVID centre which was originally a building of the Wildlife Department. Around 80 COVID cases including an 83-year-old woman were managed in Chushul itself, said Dr Wangchuk. 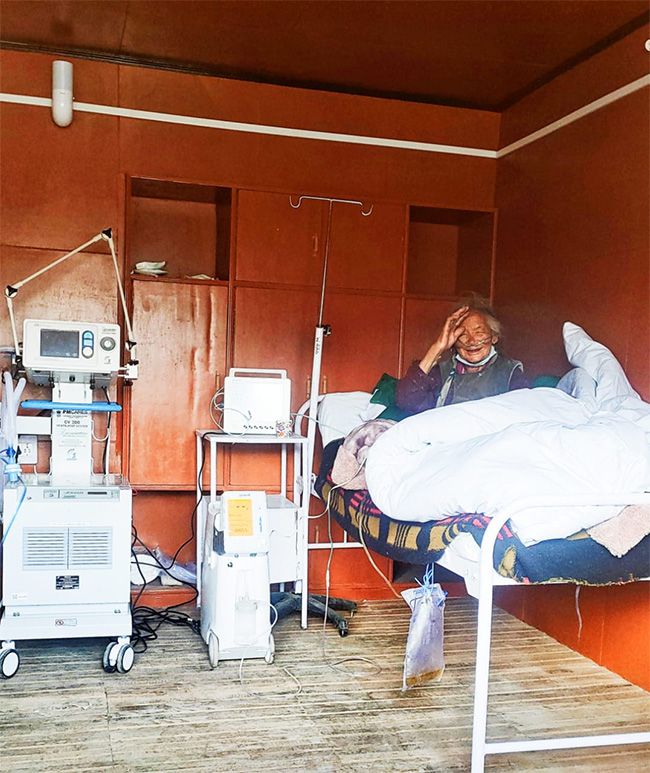 83-year-old COVID patient who was treated in Chushul, Leh

The COVID warrior credits his team of 18 for the transformation of the PHC. He says, “It’s all about teamwork”. His team includes two female multi-purpose workers, three nurses, a lab technician, an X-ray technician, four nursing orderlies, ANMs (Auxiliary Nurse Midwives), and others.

Around the same time, on the night of 29/30 August 2020, there was a stand-off between China and India. One of the soldiers was killed in action and Dr Wangchuk conducted a post-mortem despite lacking desired equipment. He also volunteered and assisted the army personnel with medicines and water.

Dr Jigmet Wangchuk Medical Officer of PHC #Chushul heading towards #LAC with medicines and water on his back to our brave soldiers deployed at border, these days every individual becomes volunteers. Hats off to u Dr Jigmet @narendramodi @IAmErAijaz @rohit_chahal @JTNBJP @ladags pic.twitter.com/UBefofuF1H

At that time, mobile services were disrupted for four to five months. My family would often get worried. To update them about my well-being, I would go to the Panchayat Ghar and call at midnight. At any given point, 20-25 connections can be set up through the BSNL VSAT service. My mother is bedridden since 2005. I took care of her for three years before joining the Jammu and Kashmir healthcare services. Throughout my journey, my wife who is also a doctor and my father have supported me immensely, he said.

In May 2021, Dr Wangchuk was transferred to Tangtse as Block Medical Officer of Durbuk Block. While signing off, the healthcare worker said that he aims to ensure health for all by “providing best possible health care services to the people of the remotest region of Ladakh.”

Also Read: By The Women, For The Women, Pink Ambulance Service In Delhi Is Breaking The Gender Bias

Related Topics:
Ladakh Leaving No One Behind World Health Day 2022
Up Next

World Health Day 2022: Our Planet, Our Health. Here’s Why Climate Crisis Is Also A Health Crisis