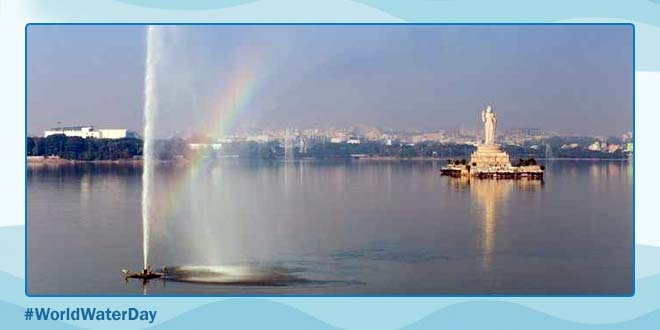 Mumbai: Soaring temperatures, insufficient rainfall, depleting ground water levels and dry reservoirs – in a nutshell depict the summers of 2016 and 2017 faced by the city of Nizams – Hyderabad. Despite being blessed with numerous natural water bodies, the IT corridor of India suffered severe water shortage for two consecutive years. To avoid a repetition this year, the Hyderabad authorities have tapped into several solutions in the last 8-10 months.

Building additional 50 reservoirs and stepping up efforts to minimise water wastage have been the two fundamental approaches adopted by the Hyderabad Metropolitan Water Supply And Sewerage Board (HMWSSB), a government body that deals with supply of water to the households and takes care of the city’s sewerage services.

In 1970s, the city had around 3,000 lakes which have now reduced by 50 per cent due untimely death or shrinking of the water bodies. Allowing sewage and industrial effluents freely into the lakes, illegal dumping of solid waste, encroachments by private companies are some of the reasons for depleting lakes. These factors together with shrinking storage capacities and irregular rainfall have caused the drop in water levels in the last two three years. The city was forced to heavily depend on Krishna and Godavari rivers, which are 150 kilometres and 200 kilometres far from the city respectively.

After seeing our traditional water resources including Himayat Sagar, Osman Sagar, Singur, and Manjira reservoirs drying up, the HMWSSB immediately proposed construction of over 50 reservoirs across the city to not only overcome any portable water shortages but also ensure that we have water above the city’s requirement to tackle any unforeseen situation, explains  Jitendra Kumar, Public Relations Officer, HMWSSB.

The project was kickstarted last year just before the onset of monsoon season and of the 50 odd reservoirs, the department has managed to construct around 15 reservoirs, confirmed the official. Depending on the strength and size of reservoirs, each reservoir has the capacity to store upto 150-200 Million Litres of water. With the city’s water requirement of 200 litres per capita per day, the functional reservoirs are likely to provide sufficient water for the each resident of the city with a population of 1.84 crores. 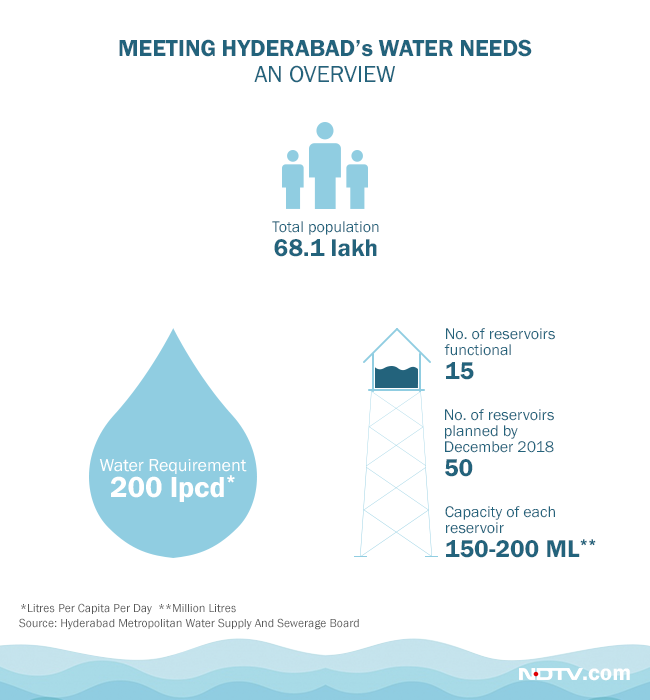 In terms of reducing water wastage, nearly 40 reservoirs have been getting refurbished, “Of the total 460 Millions of Gallons per Day (MGD) of water that get distributed, about 40 per cent wastage was recorded last year. Before the 2018 monsoons, we aim to cut down this figure by 10 per cent,” adds the official.

Besides revamping the age-old reservoirs, the HMWSSB had conducted a massive drive in the city last year to encourage households and industrial units to install water metres to keep a tab on the water usage. Within the two months of the awareness drive, almost 2,000 households including gated communities installed water metres which reduced their water consumption by 15-30%.

As per the latest data available as of March 8, the city has upto 600 MGD of water against the requirement of 460 MGD, “With additional 140 MGD of potable water, the city is ready to face the summers and defeat water scarcity. Besides supplying water to each of the 20 lakh households, we are also distributing water to more than 50 villages situated on the outskirts of the city,” commented the Mr Kumar.

Apart from lakes, Hyderabad’s groundwater resources are also stressed. Blame it on the rampant extraction of water by the water board to meet the increasing demands of water or on the numerous illegal bore-wells installed by the residents of Hyderabad, the condition of groundwater levels has deteriorated in the last few years.

In a bid to overcome this issue and recharge the groundwater tables, the government this year made Rain Water Harvesting  mandatory for all premises exceeding plot area of 200 square metres under its ‘Jalam Jeevan’ or ‘construct rainwater pits -protect future for water’ programme.

The move also expects to benefit the city economically. At present the water board spends approximately ₹45 per kilolitre to extract and purify groundwater. However, it supplies it on A subsidised rate of ₹10 per kilolitre to the consumers, and incurs a loss of ₹35 per kilolitre. Besides, the users can also profit from this sustainable option as water tankers charge anything between ₹500-1000 for domestic customers and upto ₹1,500 for non-domestic customers for 5-10 kilolitres of water.

With Rain Water Harvesting systems in place, the money spent by the government and residents can considerably come down. Water tankers are a stop-gap solution. We need to go beyond that and acquire sustainable solutions, added the official.

To ensure that water conversation takes place, the water board recently decided to stop supplying water tankers to households that do not have Rain Water Harvesting pits in prime localities like Banjara Hills, Punjagutta, Somajiguda. The board is presently conducting a survey of Rain Water Harvesting defaulters after which similar stern action will be taken.

The HMWSSB is also in the process of laying a long-term road map to effectively treat the wastewater generated from households and industrial units, the official confirmed.

Though the present water conditions in Hyderabad seem to be manageable, there are several untouched underlying problems related to water availability that may be a cause concern in future.

While the city has ample natural water resources, it has deteriorated over the years, due to natural and man-made causes. It is a well-known fact that past rulers and kings used to drink water directly from mineral rich water bodies like the river Musi. Industrialisation and urbanisation have contaminated have changed that and caused several of the city lakes to disappear.

Poor drainage system from buildings and industrial units have polluted several of our lakes. The water bodies, especially Musi river, have shrunk in size due to dumping of large quantities of industrial effluents and untreated domestic sewage. Hussain Sagar, one of the prime water bodies, has been reduced to a mere 450 hectares from a whopping 1,600 hectares. Concretisation has reduced the storage capacity of water bodies and this is making the city vulnerable to natural disasters like floods, says Dr Lubna Sarwath, Co-Convener, SOUL, a citizen’s initiative for saving water bodies in Hyderabad.

She further adds, “In a city where there are more than 150 lakes, there shouldn’t arise any need to bring potable water from rivers that are located 150-200 kilometres away from the city.”

The increasing levels of pollutions in water bodies are also affecting the city’s groundwater levels. “The polluted water is often used for irrigation purposes. These toxic elements get absorbed in the plants and then those plants are then consumed by the people and hence the pollutants enter the food chain,” adds Dr Sarwath.

For The dying lakes of the city to be rejuvenated, the government needs to improve the existing sewage system and disallow industries to dump waste without proper treatment.

Everyone, including the government and citizens must take the ownership of preserving our natural water bodies as we don’t want our future generations to suffer from water scarcity and pay heavy amounts to buy a necessity, Dr Sarwath adds.

163 Ponds Revived In 60 Days: Here Is How People Of Ernakulam District, Kerala, Are Giving A Second Lease Of Life To Ponds

India Is One Of The World’s Most-Improved Nations For Reaching The Most People With Clean Water: Report