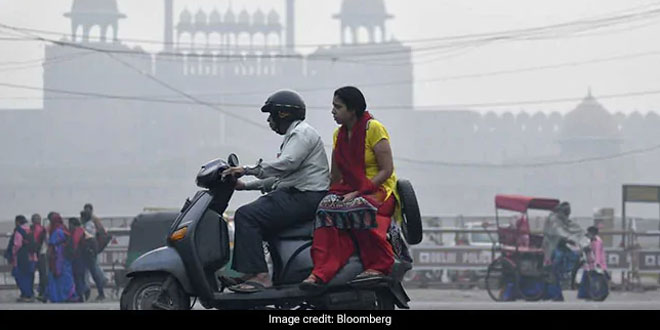 Bhubaneswar: A whopping 92 per cent of world’s population are unable to breathe clean air because of air pollution which has been identified as the cause of 7 million deaths every year across the globe, eminent environmental scientist Professor Uma Charan Mohanty said. Emeritus Professor at IIT (Indian Institute of Technology), Bhubaneswar said,

Pollution is on the rise due to anthropogenic reasons but at the same time mankind needs energy and development said to be the contributory factors for pollution. Air pollution is reducing our lifespan by 2 to 3 years.

Around 1.2 million people died in India every year due to air pollution which was identified as the third biggest cause of death in the country, Professor Mohanty said while addressing a programme organised on the occasion of World Environment Day on Wednesday.

‘Air Pollution’ happens to be the theme for this year’s World Environment Day. Meanwhile, the air quality in as many as 102 cities in India was extremely poor. Six of these urban centres –Bhubaneswar, Cuttack, Balasore, Rourkela, Angul, and Talcher, were located in Odisha. Vehicular traffic and industry contributed to 40 percent and 25 per cent of air pollution respectively while it was also responsible for climate change and extreme weather events, he said.

The major anthropogenic reasons for air pollution were growth in vehicular emission, energy generation, and industrial growth. Professor Mohanty said air pollution was also adversely contributing to climate change and triggering extreme weather events like cyclones of extreme intensity and heat waves while rainfall was getting erratic. He said,

Adaptation to climate change is important and our dependence should shift towards clean energy sources like solar, wind and hydropower. If we can tap 30 per cent of available solar energy, we will not require any other source.

Ajit Padhi, Director (Operations), NASSCOM (National Association of Software and Services Companies), who was the chief guest on the occasion said Bhutan had embarked on a campaign to make the Himalayan kingdom pollution free. He said while emphasising on methods to reduce energy consumption, “Bhutan’s Carbon Zero campaign is praiseworthy.”

Also Read: UNDP And Coca Cola Join Hands With Bhubaneshwar Municipal Corporation To Manage The Plastic Waste In The City

‘Swachh Survekshan League 2020’ Launched, Cities And Towns To Be Ranked On Cleanliness Every Quarter