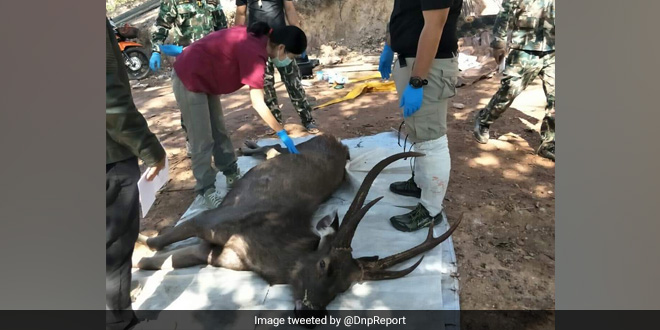 New Delhi: The infamous and versatile plastic has been posing major environmental risks ever since it was invented. Unfortunately, plastic waste has to such infiltrated our water bodies and land to such an extent that it is now threatening the existence of the planet and its inhabitants from marine species to now wildlife. On Monday (November 25), near Khun Sathan National Park in Thailand, a wild deer was found dead after choking on 7 kilos of plastic debris. According to the information shared by the Department of National Parks, Wildlife and Plant Conservation on its official website, the animal died from gastrointestinal obstruction combined with old age.

According to the officials, the male deer weighed about 200 kilograms, was 135 centimeters tall and aged over 10 years. The officials believe that the deer died two days prior to it being found.

On inspection, though no external wounds were found but a variety of waste, especially plastic waste was found. A total of 7 kilos of plastic waste including coffee bags, instant noodle flavoring bag, plastic bags, rubber gloves, cloth, rope, straw, men’s underwear was found in deer’s stomach.

Starting from January 1, 2020, over 2500 retail and supermarket stores will stop giving plastic bags to customers. This implies that citizens will have to carry their own reusable bags.

Earlier this year, a supermarket chain in Thailand, took up the issue in an innovative way. The Rimping Supermarket chain in Chiang Mai got rid of plastic packaging for vegetables and instead switched to banana leaves to wrap them.

Also Read: The Trend Of Using Banana Leaves To Pack Veggies And Fruits Instead Of Plastic Travels From Thailand To Chennai

Plastic, A Thin Line Between Life And Death

In 2018, a sperm whale, the largest of the toothed whales, had washed ashore dead on the Murcian coast in southern Spain after choking on 29 kilos of plastic debris. Later in June 2018, in a suburb called Basai in Gurugram on the outskirts of Delhi, a plastic ring got stuck in Black-necked Stork’s beaks for almost a week. The bird was forced to survive on water as it couldn’t open its mouth to consume food. In 2015, a distressing video of a male turtle from Costa Rica went viral that had a 10-12 cm plastic straw stuck in its left nostril. A team of scientists initially thought a parasitic worm is blocking turtle’s airway. But, soon realised it was actually a plastic straw, threating its survival. 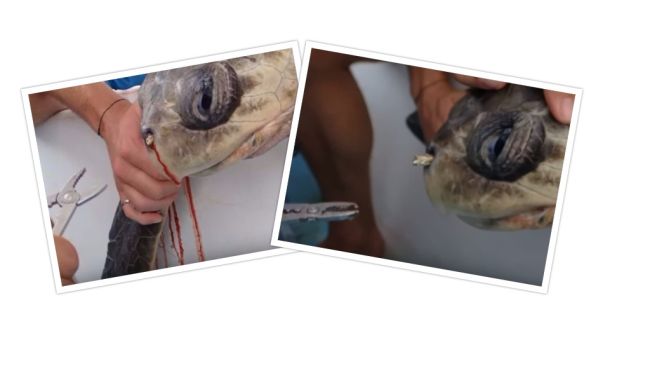 Sea Turtle with straw up its nostril

The death of animals due to choking on plastic, highlights the threats of reckless consumption and improper disposal of plastic by human beings. According to the UN Environment, a staggering 8 million tonnes of plastic ends up in the world’s oceans every year and if the current trends continue, our oceans could contain more plastic than fish by 2050.