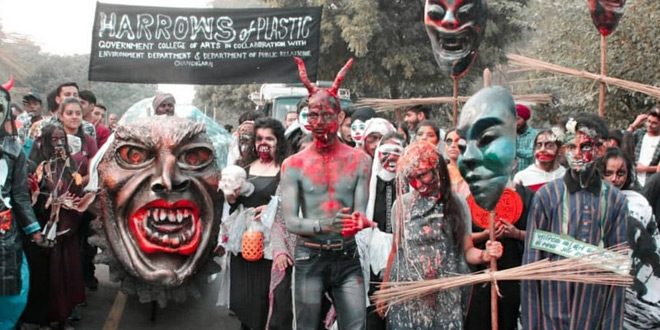 The Halloween rally was majorly a part of our month long campaign titled ‘Plastic Ka Time Up’ which aims at eradicating the use of single-use plastic. The rally aimed at gathering attention towards plastic pollution, calling for action against plastic and asking people to give up the use of atleast one single-use plastic item.

Imbibing the idea of ‘actions speak louder than words’ the students dressed up as ghouls and demons of plastic (evil plastic and how dangerous it is for the earth) carried out a silent rally at Sukhna Lake, a prime spot in Chandigarh. The participants were accompanied by a 50 feet long Plastic Demon created by the students of the Government College of Arts. Aastha, one of the students who took part in the rally says,

Sukhna Lake is a silent zone, but has a maximum number of footfall, including tourists, hence we chose that place to carry out a rally. As soon as we stepped into the silent zone, we all went silent; fortunately, it wasn’t a problem as our costumes fashioned out of plastic material were appropriate to convey the message loud and clear. Also, we carried placards, and used face painting as a means to reiterate the message. 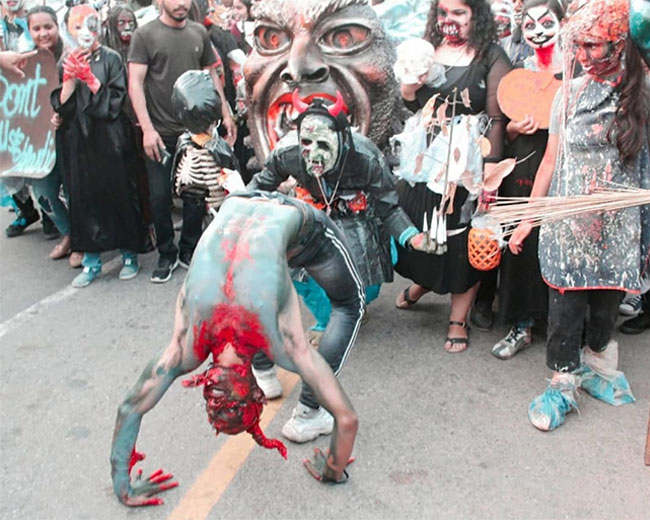 Also Read: Pay Attention To Amitabh Bachchan’s Message On Say No To Plastic

The Halloween rally, ‘Harrows of Plastic’ witnessed a positive response from the audience and it is evident with people from all walks of life interacting and willing to take a selfie with a plastic demon.

We used the public participation to our benefit as in we agreed for a selfie only when visitors pledged to give up single-use plastic. Also, while we were interacting with citizens, we realised that people had little to no knowledge about the alternatives to plastic items and that is one of the major reasons stopping them from breaking up with the toxic plastic, says Aastha.

To continue with this fight against plastic, the team has decided to station the plastic demon within Chandigarh so that it continues to grab eyeballs and serve the purpose of educating citizens. 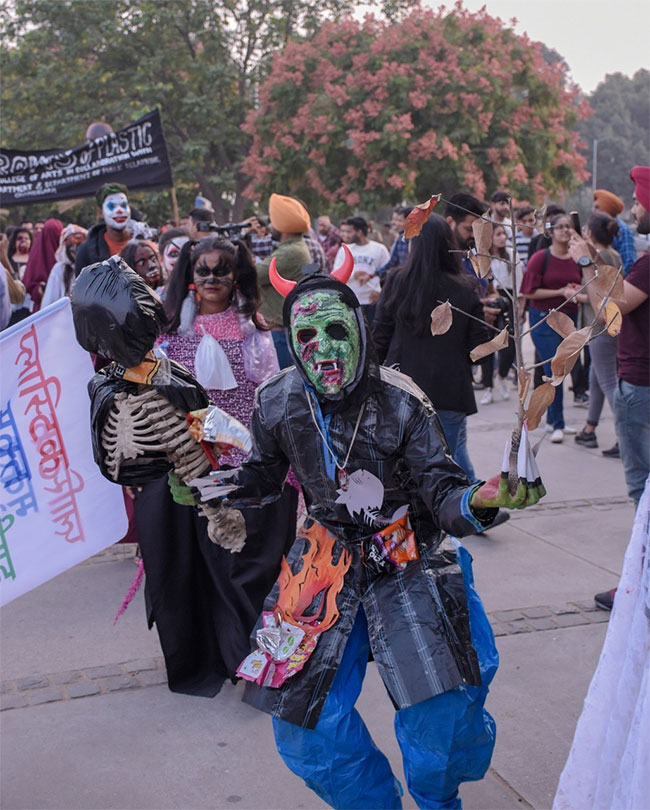 The ‘Plastic Ka Time Up’ campaign is an initiative of the Department of Public Relations towards phasing out the single-use plastic from the Union Territory Chandigarh. The drive towards ‘Plastic Mukt (free) Chandigarh’ was flagged off on October 1 and numerous activities like street plays, awareness drives, slogan and essay writing competition have been organised. To propel the objective of the campaign among youth and social media users, #PlasticKaTimeUp challenge was launched. The participants had to do two simple things – give up one single-use plastic item and nominate two people from their friend or family circle to join the campaign.

Joining #PlasticKaTimeUp, RJ Charu from Chandigarh introduced two of her favorite and forever companions – Jugga Singh (Jug) and Mugga Singh (Mug). Symbolic of the switch RJ Charu has made from plastic water bottles to steel, glass and copper tumblers for water and beverages, she encouraged others to befriend Jugga and Mugga Singh too.

Accepting #PlasticKaTimeUp challenge, actor and stand-up comedian Upasana Singh pledged to replace plastic food containers in her kitchen with either glass or steel containers and further nominated her husband and sister to follow suit.

Other participants of the #PlasticKaTimeUp challenge included RJ Mehak, who shared some of the easily available alternatives to single-use plastic including cloth, paper bag and reusable mug.

Actor Nav Bajwa spoke at length about how single-use plastic is hazardous for the environment, human being and wildlife. While challenging two of his friends, the actor decided to avoid plastic while shopping and eating out.

Turn Plastic Trash Into Treasure By This New Method