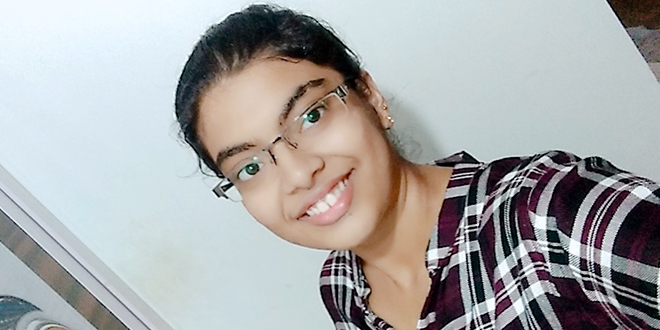 New Delhi: “Within our communities, it is very much visible that climate justice proportionately affects females. For example, if we look into education, there are a lot of education institutes and education materials that we lose access to due to climate disasters. And when that happens, due to the belief that education of females is comparatively less important as that of males, it is females who usually get cut off from the education process”, explains 21-year-old Reshma Anil Kumar, working to mitigate climate change impact and gender equality. Reshma was born and raised in the Middle East and currently resides in Kerala. They identify as an LGBTQ+ individual who sees the world through a gender-neutral lens.

Reshma is working towards the UN’s Sustainable Development Goal 5 (SDG-5) of achieving gender equality, with a keen focus on LGBTQ+ issues, and Goal 13 of climate action. They are also certified in Disaster Management and Climate Action. Reshma is also a part of UNICEF YuWaah’s Young People’s Action Team (YPAT) programme – a campaign to engage and listen to young people’s needs, ideas and aspirations.

In an interview with team Banega Swasth India, Reshma explained the link between climate change and gender equality. They said,

Reshma believes that gender-based violence, especially against females and the trans community, has immensely increased after the climate disasters to the point that some have been murdered. Explaining her stance in detail, they said,

Trans people, just because they are too different for this cis-heteronormative community, they are seen as bad omens in some communities and because of the fact that they are seen as bad omens, they are considered the cause of these disasters rather than climate change. This kind of social stigma ends up restricting a lot of their social opportunities and infrastructure and because of that, in extreme but common cases, a lot of people end up having to leave their homes before they even have enough education or skill set to enter into the society. And, when they leave homes, where they end up are usually violent and places of huge climate risk. There is nothing they can do about it often because a lot of property owners refuse to rent their properties to LGBTQ+ people just because of their sexuality or gender identity. In that scenario, they have no way other than going to the streets and begging or entering into sex work just to live.

Reshma, a post-graduate student in Gender and Development Studies says that they have always been interested in and concerned about climate issues but looking into the justice part of it happened recently.

The start of it was me realising my sexuality and gender identity two years ago and last year, respectively. Once that happened, I started thinking about why I or my next generation need to fight for the rights that we inherently deserve. That was the kind of thought process that led me to ponder about how I was not being able to play my part, be it fully or partially when it came to climate justice which in turn was also aggravating climate issues, they said.

It was since last year that Reshma really started giving attention to and working on how much gender equality is a part of climate justice and that only with climate justice can we combat climate issues. They say,

It hasn’t been easy since then because a lot of people think even now that climate change is not for real and throwing gender inequality to the mix gets things quite complicated.

When asked about the work in the two fields, Reshma said,

Considering that it hasn’t been long since I understood how these two fields are integral to one another, most of my efforts have been through my social media and blog through which I share my personal stories and partake in various campaigns and volunteering activities. I have also been engaging in talks with people on a personal level about how these topics are deeply intertwined. I’m also planning to organise community-level activities in the near future along with the research project I am preparing right now.

Reshma is working towards SDG-5, especially LGBTQ+ issues, by sharing personal stories and empowering people, mainly through their social media handles. Their goal is to inspire people to share their own stories and build bridges to connect people to one another, no matter what their differences.

Talking about her goals in the field of climate justice and gender equality, Reshma said, they are looking toward effective implementation of existing laws and policies. Along with that, specifically for the LGBTQ+ community, they are advocating for marriage equality and more inclusive surrogacy and adoption laws, so that people don’t get unnecessarily pushed into climate risk areas and end up becoming climate refugees when they have better alternatives and healthier lives to live, they said.

Just because adoption laws concentrate on heterosexual couples who can’t have children by themselves, it leads to a lot of children losing their opportunity to a healthy, happy, prosperous home and livelihood, they added.

Also Read: “Our Presence Needs To Be Recognised”, Says Onir, Filmmaker And Author On The Inclusion Of LGBTQ+ Community

Related Topics:
Climate Change Environment Leaving No One Behind
Up Next

Number Of Undernourished People In India Declines To 224.3 Million; Obesity Among Adults On A Rise: UN Report