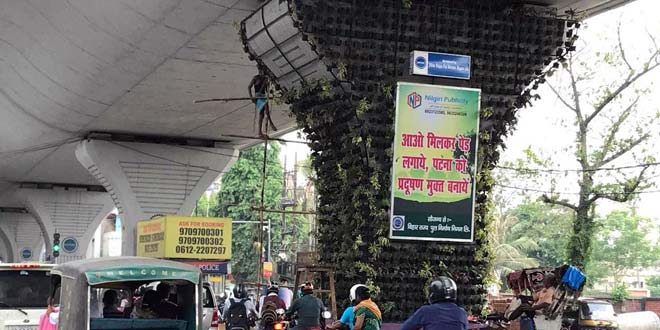 New Delhi: Air pollution has been a nagging problem facing most cities in India. With levels of air pollution oscillating between ‘very poor’ and ‘severe’ in the country, it is consistent case of concern and a health hazard. To combat the poor air quality Bihar Rajya Pul Nirman Nigam Limited (BRPNNL) has decided to equip all the 90 pillars of the city’s flyover with different kinds of air-purifying plants. The project received a green signal last week and the contract to convert the pillars into vertical gardens was given to Nilgiri Publicity. As of today, the concept of vertical gardening has been implemented on pillar number 89 of Raja Bazaar flyover, Patna.

The main reason is to purify the air. Currently, it has been implemented on only one pillar, reason being, we want to understand the challenges and see what else is required. Just putting up plants might not solve the purpose. We need to understand the dynamics.

Vertical Garden In Patna: Here Is How It Is Being Implemented

To ensure safety, an iron structure is created and fitted on the flyover. On the iron structure, we have fitted 2,000 pots and plants of different varieties.

It costs Rs. 1 lakh to install vertical garden in one pillar and requires 2,000 plants to cover one pillar. For this purpose, the company is procuring pots from both Delhi and Pune and plants from local vendors in Patna. Four to five types of indoor air-purifying plants such as snake plants, spider plant are being used. 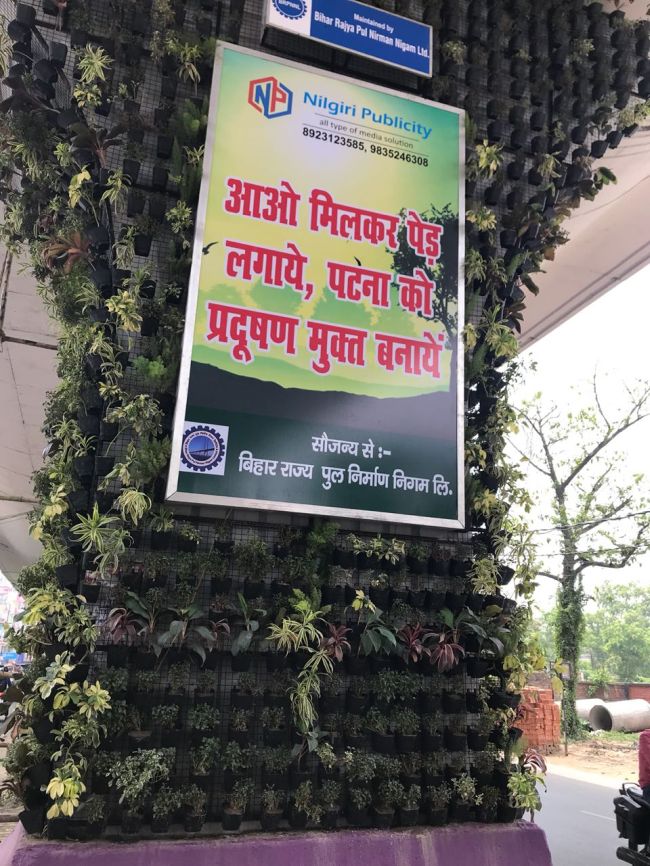 Officials of Nilgiri Publicity are confident of covering remaining 89 pillars within six months. They believe that it will not only be a source of fresh air, but will also bring down temperatures in and around the flyover.

According to a World Health Organisation (WHO) 2018 report on global air pollution, 14 of the 20 most polluted cities in the world are in India. Of these 14 cities, Gaya, Patna and Muzaffurpur from the state of Bihar were ranked 4th, 5th and 9th in the list, respectively.

Currently, the cities in Bihar reel under ‘poor’ to ‘moderate’ levels of pollution. According to the Central Pollution Control Board (CPCB), air quality index (AQI) on June 19 at 4 PM in Gaya was noted at 114 that is under ‘moderate’ category. While Muzaffurpur’s current air quality is poor with AQI at 248, Patna recorded moderate AQI at 162.

The concept of vertical gardening has already been tested in Noida, Delhi, Bengaluru and it has received appreciation from the public. The Kochi Metro was the first among the Metrorail corporations to adopt this initiative and build vertical gardens in January 2017. Taking cue from Kochi was Bengaluru’s Namma Metro, Nagpur’s Mahametro and Delhi’s Metro Corporation.

By June 30, All Cities And Towns in Punjab To Become ODF, Thanks To The Swachh Motivators

Maharashtra Plastic Ban: What Is Banned And What Is Not