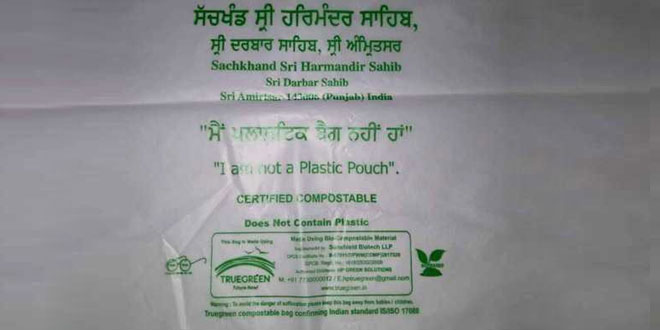 New Delhi: Sri Harmandir Sahib, also known as the Golden Temple, in Amritsar is one of the holiest place of worship receiving over 1,20,000 devotees each day, totaling around five crore per year. Adherence towards a clean environment is not new in its premises as the place of worship already has several eco-friendly measures (re-use) in place, such as usage of steel bowls for serving clean drinking water and steel plates for serving langar (food) instead of any disposable plastic items, and using solar energy to cook food in the community kitchen. Now, unveiling a new initiative, the Shiromani Gurdwara Parbandhak Committee (SGPC), which administers the gurdwaras across the country, has stopped use of plastic bags from April 1 this year and opted for environment-friendly compostable carry bags derived from potatoes and maize. The initiative has been implemented in collaboration with the Punjab Pollution Control Board (PPCB), and SGPC hopes that it will give a boost to the state government’s campaign to discourage the use of polythene bags.

Though the ‘karah prasad’ (devotional offering) in the Golden Temple is often given in ‘dunas’ (small bowls or plates made of dry leaves), many people use polythene bags to carry the prasad back home.

Talking about this eco-friendly initiative, the SGPC official said

Plastic bags are totally banned in Sri Harmandir Sahib premises. And to preserve environment, special bags made from starch granules derived from maize and potato have been put to use for carrying ‘karah parshad’ or ‘pinni parshad’ at the Golden Temple. The ‘pinni parshad’ packing, which was being offered only in polythene bags, too has been replaced with these eco-friendly bags.

According to the Chairman of Punjab Pollution Control Board, Kahan Singh Pannu, the Golden Temple requires 8 lakh compostable bags per month, and SGPC is already working to ensure that all gurudwaras in the state stop using plastic bags and opt for these biodegradable bags. 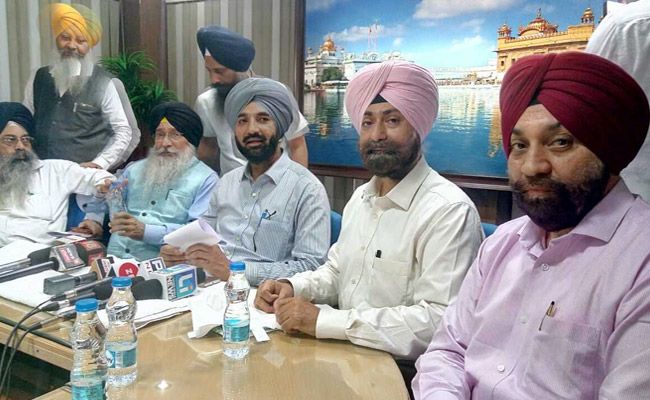 Although the Punjab government has imposed a blanket ban on the manufacture, sale and use of plastic carry bags in April 2017, the supply and use of these could not be controlled as there is a huge demand. We called a meeting of over 100 plastic carry bag manufacturers in the state and advised them to shift to manufacturing of compostable carry bags by using starch granules derived from maize and potatoes, Mr Pannu added.

The raw material for manufacturing of compostable carry bags has been allowed to be imported by the Government of India, and five companies in the country have been designated by the Central Pollution Control Board to manufacture and supply compostable bags (conforming to ISO standards in terms of Plastic Waste Management Rules 2016) from starch granule imported from other countries. These bags are not only 100 percent biodegradable, but also 30 percent stronger than the poly bags. When thrown in garbage or soil, these compostable bags will decompose in maximum 180 days, enriching the soil quality and will not hamper plant growth in any way.

“Although, the compostable bags are little bit expensive as compared to plastic bags, but we cannot compromise with the degradation of the environment because of meagre economic considerations. Punjab Pollution Control Board is committed to promote the usage of these compostable bags. And in the wake of environment preservation, the SGPC is more than willing to spend extra. Moreover, SGPC’s move to take a lead in introducing eco-friendly bags from the Golden Temple will help spread the message worldwide that we should stop using plastic and opt for other eco-friendly alternatives,” he further added.

When asked about how the government will ensure that cost of compostable bags come down and more people adopt these bags to make it an economically viable alternative to plastic bags, Mr Pannu said that the machines being used to manufacture plastic carry bags can be used to produce these compostable bags as well.

The government of India has already requested Central Institute of Plastics Engineering & Technology (CIPET) in Chennai to study the technology behind the creation of starch granule from maize and potatoes. This technology right now is patented by some foreign companies, and it would take at least a year for an Indian company to record the patent for this. Once an Indian company will start producing starch granules locally then eventually the cost of these compostable bags will come down to match the cost of plastic bags.

Notably, the Punjab Pollution Control Board aims to replace all of the plastic bag usage in the state with these compostable bags in six months. This is also in line with ‘Beat Plastic Pollution’, the theme of the World Environment Day this year. Earlier this month, the PPCB introduced the compostable bags in Ludhiana, where the wholesalers agreed to use these bags.