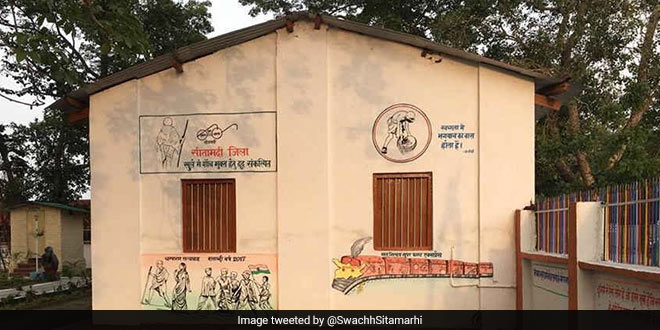 New Delhi: Success had eluded Bihar for nearly four years of Swachh Bharat Abhiyan, as the state was often pointed out as the worst performing in terms of progress made in toilet construction. Bihar finally made its presence felt in the sanitation mission, as the district of Sitamarhi became the first open defecation free (ODF) district of the state. Though, for now Sitamarhi remains the only ODF district in the state, But Bihar’s first ODF district is expected to pave the way for rest of the districts to attain the ODF tag.

With dismal sanitation coverage of 21.3 per cent till 2014, Sitamarhi was not different from other districts of Bihar with poor individual household toilet coverage. In the three and a half years that followed, massive awareness campaigns were held in the district. Swachhagrahis were asked to visit households across the district, explain to people about the Swachh Bharat Abhiyan and motivate them to build toilets. The assignment of one nodal officer for 200 households ensured that no household missed constructing a toilet. All the over 5 lakh (5,11,987) households in Sitamarhi now boast of household toilets.

We are proud to become the first ODF district in the state. We worked towards this achievement from October 2014, but the real push came in the past two months, when around two lakh toilets were constructed. A number of volunteers from NGOs, self-help groups, Anganwadis had come together in the last two months to construct the toilets throughout the district, said Ranjit Kumar Singh, District Magistrate, Sitamarhi.

“The large number of households in the district made it difficult for Sitamarhi to achieve the ODF status, but credit must be given to the district administration and people of Sitamarhi. Sitamarhi’s status as an ODF district will surely motivate other districts to follow similar programmes of toilet construction, with participation from the locals,” said Rajiv Kumar Singh, Bihar State Coordinator for sanitation, Swachh Bharat Abhiyan.

Sitamarhi’s ODF status comes at an important juncture for Bihar, which aims to go ODF by October 2, 2019. Presently, the state needs to construct another 6 lakh toilets across its 37 remaining districts.