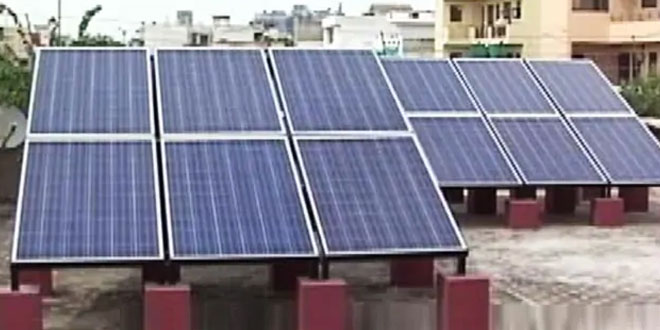 New Delhi: Aiming to reduce air pollution in Gurgaon (now Gurugram), environment think tank Centre for Science and Environment (CSE) on Wednesday batted for use of solar rooftop (SRT) in place of generators in residential societies, saying it can be an “excellent non-polluting, cost-effective alternative”. On the occasion of World Environment Day, CSE researchers assessed the solar potential in the city in association with the city-based civil action group Gurgaon First.

The researchers charted the course for Gurugram’s solar-powered future at a meeting conducted with representatives of residents’ welfare associations, municipal administration, and civil society groups. A press note issued by the CSE said that Gurgaon is a city with numerous residential societies and high-rises that promise 24/7 steady power supply, all with diesel generator (DG) support. The press release said,

Their impact on air quality has been severe. These DG sets are choking the city with their noxious fumes. The CSE’s assessment of the situation shows levels of Particulate Matter 2.5 (PM2.5) and PM10 increase by two and three times, respectively, immediately after a DG set is operated. These levels are several notches higher than the safe limits for residents.

Shweta Miriam Koshy, senior research associate-renewable energy, CSE, said, “In the long run, the solar rooftop has clear economic advantages and environmental benefits compared to the polluting, expensive DG sets. Though solar by itself does not offer an alternative for DG sets during power cuts, it does minimize the use of the latter for regular, every-day power supply.”

Gurgaon, till March 2019, and as per estimates from HAREDA (Haryana Renewable Energy Department), had only 40 MW worth of installed capacity, which is a mere 2 per cent of the city’s peak load, the environment think tank said.

Most Consumers Will Pay More For Products That Can Be Reused And Recycled, Finds A Survey