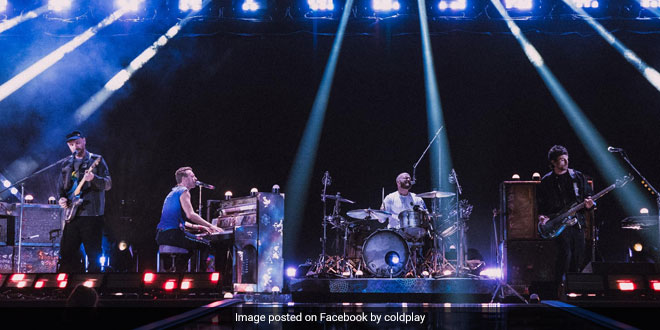 New Delhi: ‘Reduce, Reinvent, Restore’ are the three key principles on which British band Coldplay’s ‘Music Of The Spheres’ Tour will be based on, to make it as sustainable and low-carbon as possible. Along with the calendar of the world tour, the music band released a sustainability plan. Coldplay plans to ‘Reduce’ their consumption, recycle extensively and cut carbon dioxide (CO2) emissions by 50 per cent. The plan is also to support new green technologies and develop new sustainable, super-low carbon touring methods. Lastly, to ‘Restore’, the tour will fund a portfolio of nature and technology based projects and by drawing down significantly more CO2 than the tour produces. The tour will commence on March 18, 2022 and culminate on September 10, 2022 covering Europe, USA, Latin America.

We pledge to cut our direct emissions by 50 per cent compared to our previous tour (2016-17), and work with our partners and suppliers to reduce their impacts and emissions wherever possible. For remaining CO2 emissions, we are creating a carbon fund for the drawdown of carbon via nature and technology based solutions, stated the brief of the tour on the official website.

In 2019 Coldplay had commissioned a team of sustainability experts to investigate their environmental impact and carbon footprint. As per the band, this helped them to identify the key areas where they can avoid, reduce and mitigate our carbon emissions.

The Coldplay plans to execute their stage production almost entirely with renewable, super-low emission energy and avoid fossil fuels wherever possible. For the same, in the build-up to each show, solar tiles will be installed on the stadium floor, outer concourses and on the stage. Additionally, the plan is to install a kinetic floor in and around the stadium so that the fans’ movements can be converted into energy and help to power the show. Electricity-generating power bikes will also be installed so that fans can choose to actively charge the show battery.

HVO fuel (Hydrotreated Vegetable Oil) is recycled from waste cooking oils and does not contain palm oil. HVO can lower generator emissions by up to 90 per cent. Wherever possible, we will also use HVO in our buses and trucks, meaning super-low emissions from our show transportation as well, said Coldplay.

This first-of-its-kind mobile rechargeable show battery – made from recyclable BMW i3 batteries – will charge the show with renewable.

For all flights, commercial and charter, the band will pay a surcharge to use or supply Sustainable Aviation Fuel (SAF), either for their own use or for others’. SAF is made from renewable waste materials and can reduce emissions from air travel by up to 80 per cent over the fuel’s life cycle, compared to standard aviation fuel. Wherever possible, the band will use electric vehicles or biofuel for ground freight and transportation.

The stage will be built from a combination of lightweight, low-carbon and re-usable materials including bamboo, and recycled steel. The LED wristbands worn by the audience as part of the show will be made from 100 per cent compostable, plant-based materials.

We will reduce wristband production by 80 per cent – by collecting, sterilising and recharging the wristbands after every show. The electronic components will be repurposed for wristbands to be used in future tours, said the band.

Ultra-efficient equipment such as low-energy LED screens, laser and lighting system will be used to reduce power consumption by up to 50 per cent. Additionally, confetti used during the show will be 100 per cent biodegradable.

A free tour app will encourage fans to use low carbon transport to and from shows. Fans who commit to low-carbon travel will be given a discount code to use at the venues. Based on fans’ use of the app, the total carbon footprint of travel will be calculated and later the band will drawdown the emissions via nature-based solutions like rewilding and conservation. Also, at least one new tree per ticket sold will be planted.

Venues will be asked to introduce aerated taps, low flushing toilets and to reduce water pressure to alleviate water wastage. Fans will be encouraged to bring their own reusable bottles. Along with it, free drinking water will be available at every show, with reusable aluminium cups.

Single-use plastic water bottles will be replaced with reusable and recyclable alternatives like aluminium cups. Recycling programmes will be organised within the stadiums. The tour will help clean up waste by sponsoring the two-tiered work of The Ocean Cleanup. Ocean Cleanup units remove garbage from rivers and oceans.

The band has clearly stated that all crew catering menus will have plant-based and meat-free options as standard. Organic produce will be sourced locally. And the band will support the development of synthetic, lab-grown cultured foods.

While tie-ups with local food banks will take care of surplus food, organic waste including vegetable peelings will be composted.

10% of everything the band earns will go into a good causes fund. These funds will be split between environmental and socially-conscious projects and charities including ClientEarth, The Ocean Cleanup and One Tree Planted.

Greenhouse gas concentrations hit a new record in 2020, the United Nations’ weather agency World Meteorological Organization’s report said on October 25, warning that the world was “way off track” for capping rising temperatures. The report showed that carbon dioxide levels surged to 413.2 parts per million in 2020, rising more than the average rate over the last decade despite a temporary emissions dip during COVID-19 lockdowns.

The World Health Organisation has warned that climate change is the single biggest health threat facing humanity and called upon governments to step up climate action at the Conference of Parties (COP) 26, global climate conference at Glasgow, starting from October 31.

Implementation Of SDGs Needs Efforts Of Society As A Whole: India’s Permanent Representative To UN