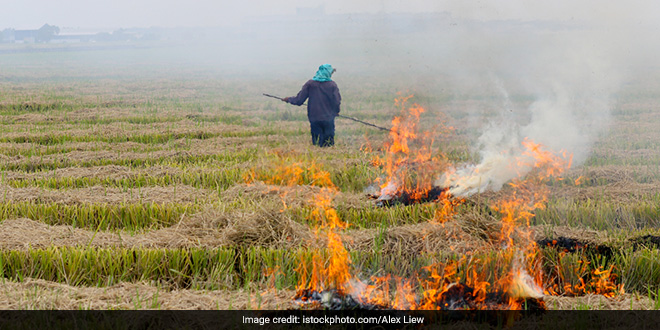 The levels on 2021 Diwali night were 4.5 times the average night-time levels recorded in the week preceding Diwali.

New Delhi: Though Diwali this year will be observed during the “warmer part of the early winter”, concentrated stubble burning in Delhi’s neighbouring states may compound the problem, the Centre for Science and Environment (CSE) said on Thursday (October 20). The air quality in Delhi-NCR starts worsening in October due to unfavourable meteorological factors such as low temperatures and wind speed, which do not allow dispersion of pollutants.

A cocktail of emissions from firecrackers and stubble burning in neighbouring states further deplete the air quality. The CSE said Diwali this year is being observed early in the season “which means the warmer and windier conditions will help dilute the pollution that is staple of Diwali night celebrations”.

Unlike previous two years, the smoke from the farm stubble fires has not overwhelmed the air quality of the region yet and rains in early October have also kept the air relatively clean so far. However, a prolonged spell of rains in early October has delayed paddy harvesting in parts of Punjab and Haryana that could lead to a spike in stubble burning incidents as farmers would be in a race against time to prepare their fields for the next crop.

Previous years’ data shows that Diwali night can add 300-600 microgram per cubic metre of PM2.5 to Delhi’s air if the business-as-usual scenario continues, it said.

Emissions from firecrackers and farm fires last year had pushed the capital’s 24-hour average air quality index for the day after Diwali to 462, the highest in five years.

PM2.5 concentration on Diwali night (8pm to 8am) last year stood at 747 microgram per cubic metre, 22 per cent higher than that on the 2020 Diwali night, the CSE said.

The levels on 2021 Diwali night were 4.5 times the average night-time levels recorded in the week preceding Diwali.

Only Green Crackers Will Be Allowed In Haryana On Diwali: Chief Minister Manohar Lal Khattar

Some Countries May See Another Wave Of COVID-19 Infection Due To XBB Subvariant, Says WHO Chief Scientist