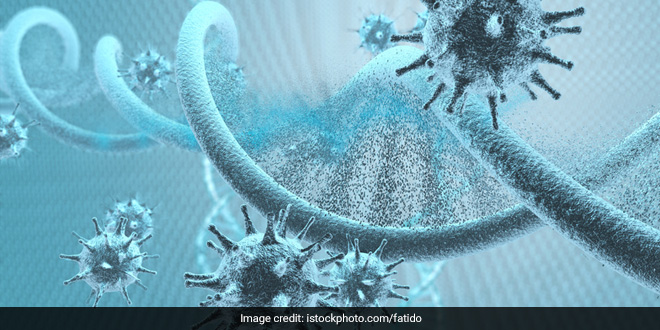 New Delhi: Can a person catch COVID-19 twice? According to experts, there have been some incidences of people losing antibodies developed against the virus during the first infection in a short span of time and getting infected again. While the researchers across the globe are still conducting studies to understand more about the novel coronavirus Sars-CoV-2, its impact on the body and the response of human body against it, they have found that immunity mediated by T-Cells also called as T-lymphocytes can provide protection from the second attack of the virus. NDTV reached out to medical experts to learn about T-Cell immunity and how it provides defense against COVID-19.

T-Cell is a type of White Blood Cell and is an essential part of the immune system of a human body. According to Dr. Smita Kulshreshtha, lead pathologist at Final Diagnosis Laboratory, a private lab in Agra, when pathogen enters the body, the immune system mobilizes a series of cells and proteins that forms antibodies to defeat the virus, however, when the viral load is high, it calls in fighter cells for back up which are called as T-Cells. These cells have the ability to recognize the unique biological/chemical structures or antigen being carried by the pathogen and kill them, because of which these cells are also called memory T- Cells. Further explaining the immunity functions of T-Cells, Dr. Kulshreshtha said,

Our immune system is divided into two parts- Humoral antibody immunity and T-Cell dependent immunity. The Humoral antibody immunity is that aspect of immunity where antibodies are produced to fight specific antigen which is a harmful substance or molecules carried by microorganisms like viruses, bacterium, fungi or works collectively known as pathogen. The antibodies released by Humoral antibody immunity system react with the antigen and kill it. The second aspect of our immune system is T-Cell immunity which is dependent on T-Cell. These cells are trained to recognize specific antigens to which they will trigger a faster and stronger immune response if they have encountered the same or similar antigen before. T-Cells cause the production of small proteins called cytokines which is a signaling machinery of the immune system that mediate and regulate immunity and the inflammation caused by antigen in the body.

She further said that since people have been exposed to various kinds of influenza inducing viruses including some previously recognised coronaviruses, the T-Cell are able to recognise the pathogen and are able to activate a reponse to it, thus providing a defence against viruses. She added that T-Cell immunity is one of the reasons for younger children having better immunity against COVID-19 than the senior citizens. She said,

T-Cell immunity among children is higher because children are prone to getting exposed to influenza causing viruses and other infections so their T-Cells are more alert and activated in recognizing the pathogen on re-encounter. However, over the time, as one gets older, the exposure to infection decreases and also their immune system becomes weak. Therefore, we see that children are not as affected by COVID-19 as the senior citizens. 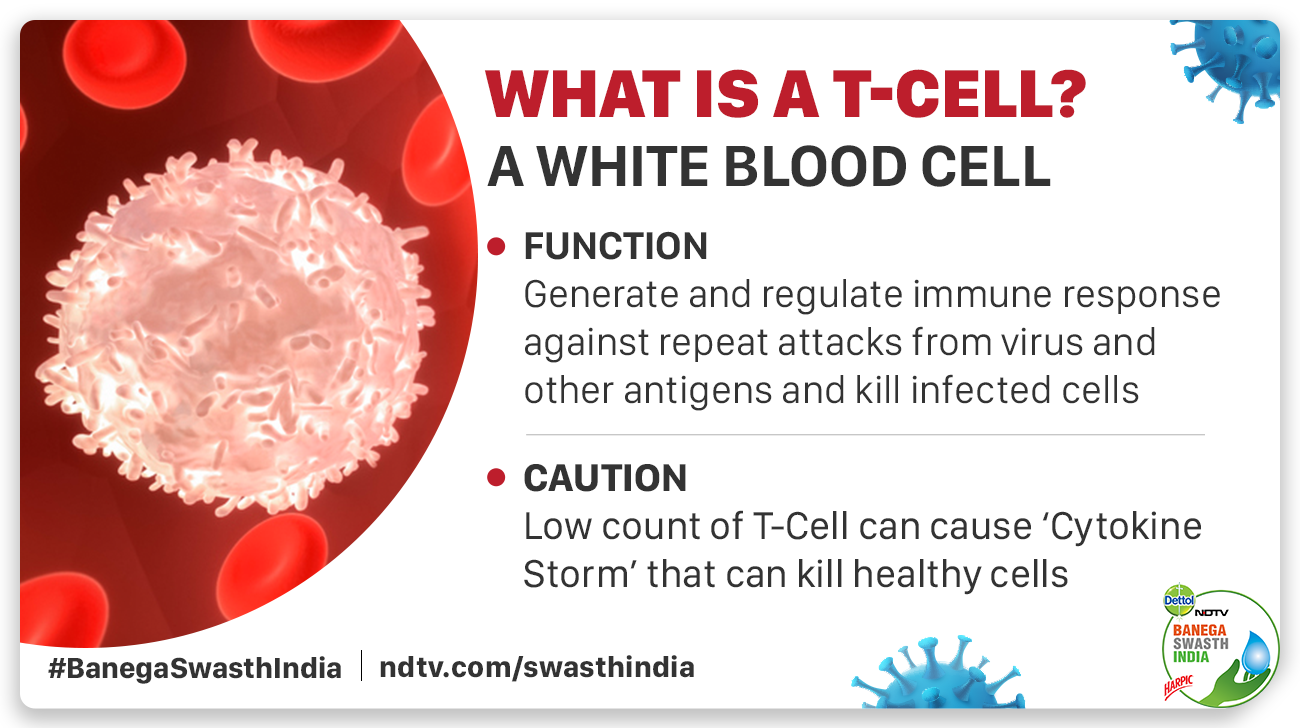 What is a T-Cell?

While explaining about the concept of T-Cell immunity and how it can be a saviour in the fight against the COVID-19, Dr Rajesh Malhotra, Chief, COVID-19 facility, Trauma Center, AIIMS (All India Institute Of Medical Science) said that this immunity is what saving most survivors from getting the infection again. He said,

T- cell immunity is what keeping us going. Till now, there have not been many incidents of reinfections even though it has been seen that antibodies against coronavirus are going down in some patients as early as within one month. It is the T-cells immunity where I am putting my hopes on, because there are responding to the virus that they encountered earlier. Currently, there are some vaccines that are being developed with an aim to provide dual immunity- by injecting antibodies and T-cells as well.

Also Read: Coronavirus Outbreak Explained: What Are The Long-Term Impacts Of COVID-19 On Human Body And The Recovery Process?

Low Count Of T-Cells Can Cause Further Complications Among COVID-19 Patients: Expert

According to Dr. Monica Mahajan, Director Medical, Max Super Speciality Hospital, Saket, T-cells are responsible for generating an immune response to a foreign pathogen including a virus like SARS-CoV-2. She said,

There are two type of T-Cells. First, which directly kill the virus infected cells and ensure a strong immune response is generated by signaling system called cytokines. The other T-Cells the ‘helper’ T-cells (called Tn cells). These work as helper to another group of cells called B-Cells and fight a disease by producing antibodies. Majority of the COVID-19 patients have a good Immune response by increase activation of T-Cells. It produces antibodies that neutralizes the virus ensures recovery and possibly protection against subsequent episodes of COVID-19.

However, Dr. Mahajan also highlights that low T-Cells count can cause a phenomenon called cytokine storm in which an overreaction of the immune system take place and it loses the ability to identify the good cells from virus affected or bad cells and lead to critical cases of COVID-19, multiple organ failure and even death. She said,

Among patients with severe COVID -19, especially the senior citizens or those who have weak immunity due to an underlying condition like hypertension, obesity, heart prblems, diabetes or any other illness, there is a lower T-Cell count. In this case, there is an increase in the bad cytokine proteins which causes a ‘cytokine storm’. This result in all the complications including severe acute respiratory distress syndrome (ARDS) or respiratory failure. A low T-Cell count has been correlated with a higher concentration of cytokines.

She further said that a low T-Cell count can be caused due to a more prolonged COVID-19 infection leading to T-Cell exhaustion in severe cases of COVID-19, as observed in patients in ICU (Intensive Care Unit).

Dr. Mahajan also said that a vaccine for SARS-CoV-2 will have to potentially activate the T-Cells along with stimulating the immune system to produce antibodies against the virus. She said that if an individual does not develop a robust T-Cell specific response to the virus, the vaccine may not offer long term protection.

In order to fuel the T-Cells and strengthen body’s immunity against COVID-19 and other such infections, Dr. Shweta Khandelwal, Nutrition Expert, PHFI (Public Health Foundation of India) said that it is advisable to follow a diet rich in nutrients. She said,

T-Cells are highly influenced by nutrient uptake from their environment, and changes in overall nutritional status (both under- and over-nutrition) can result in altered T-Cell efficiency. The lack of protective immunity as seen in malnutrition, can be easily traced back to the developmental defects associated with inadequate nutrients and the lack of nutritional signals such as leptin, a hormone, that are critical for fueling immune cell production and function. Leptin can influence immune cell number and function through its effects on cellular metabolism. It has been identified as a key regulator of both protective immunity and autoimmunity in the context of nutritional disorders.

She further added that to fuel T-Cell’s efficiency to act in the favour of body’s immunity, there is a need to increase the intake of nutrients, including glucose as well as amino acids found in legumes, beans, dairy, eggs and others. She asserted that Vitamins–particularly Vitamin A found in yellow vegetables and fruits like Mango and Papaya and B9 found in dark green leafy vegetables such as spinach, affect T-Cells’ regulatory functions. Foods high in poly-unsaturated fatty acids particularly omega-3 fatty acids such as chia seeds, walnuts, brussels sprouts, and avocados play an important role suppressing allergic inflammation can positively affect immune system, she said. Dr. Khandelwal stressed on following a RAINBOW diet to boost immunity naturally. She said,

To easily understand and remember about having a balanced diet, I would suggest one to follow RAINBOW: R- roughage which is fibre for better gut health, A- Antioxidants like Vitamins and minerals from coloured fruits and vegetables, I- Immunity boosting ingredients like spices, nuts, herbs, N- Natural foods, minimise the easily available fast food, B- Lots of healthy non sugary beverages like water, buttermilk, lemon water, herbal tea among others, O- Omega 3 fats like in mustard oil, flax seeds, chia seeds and walnuts, W- Wholegrains and pulses and non-refined flours. 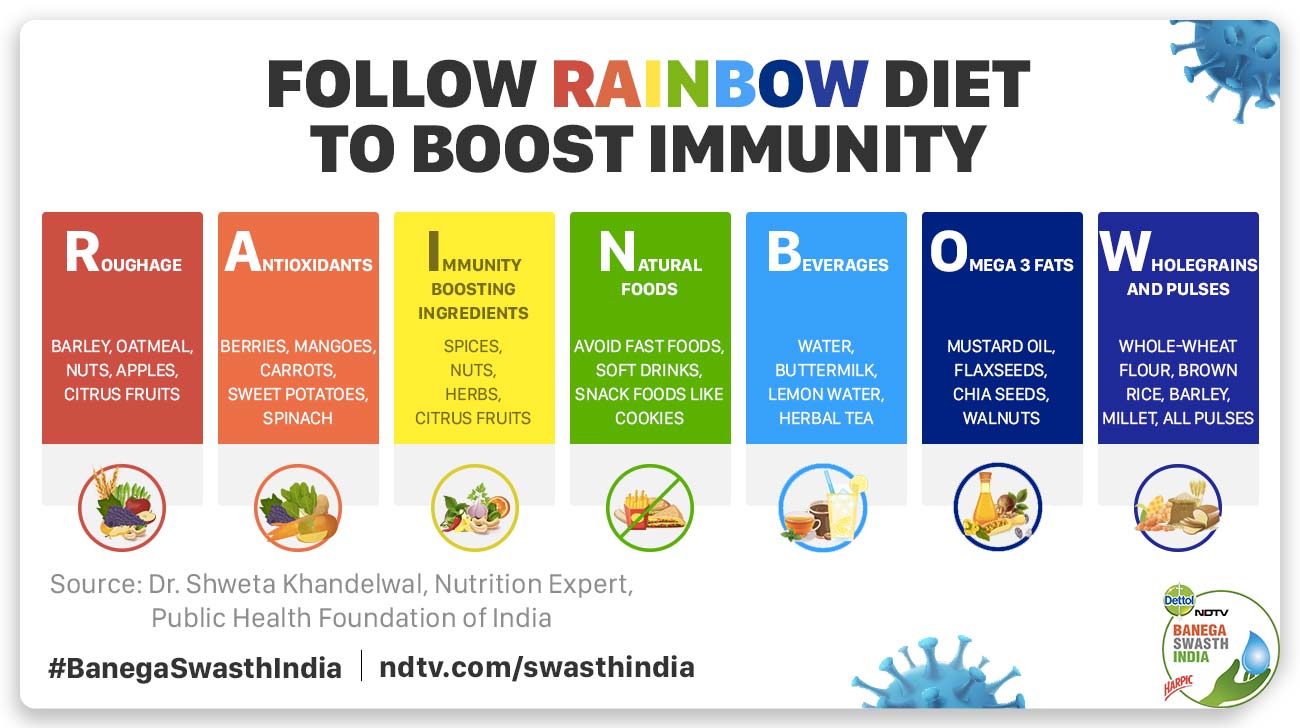 According to experts, currently, there is still a lot unknown about the immune responses to SARS-CoV-2. They say that it is not known yet about how much immunity to expect once someone is infected with the virus and how long that immunity may last since the virus has been known only for past eight months. However, they say that there is some hope regarding cellular immunity dependent on T-Cells in the absence of a durable antibody response.

Also Read: Coronavirus Outbreak Explained: What Is A Cytokine Storm And How Is It Fuelling COVID-19? Experts Answer

Coronavirus Explainer: Origins Of COVID-19 Is Still A Critical Missing Piece Of The Pandemic Puzzle