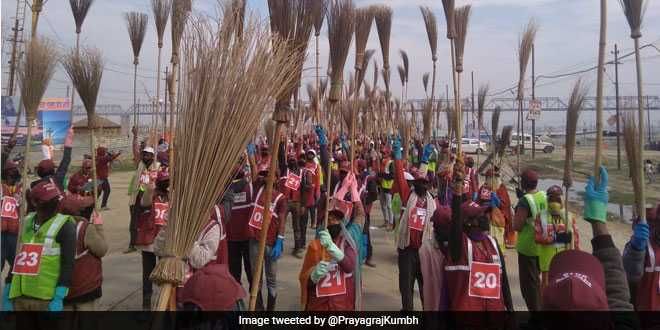 New Delhi: 10,000 sanitation workers armed with the jackets, masks, brooms set a Guinness World Record on Saturday for conducting the massive clean-up drive at Prayagraj during Kumbh Mela 2019. It was the first time in the history a record for ‘Most People Sweeping The Floor’ was made in India where people descended on the streets with an aim to clean it up. This new record was created to live up to the theme of Kumbh 2019 which is Swachh Kumbh, Surakshit Kumbh (Clean Kumbh, Safe Kumbh) and promote India’s ongoing biggest cleanliness campaign – Swachh Bharat Abhiyan.

Also Read: Honoured By PM Narendra Modi For Swachh Duties At Kumbh, Boatman Raju Says ‘Never Ever Have Witnessed A Cleaner Kumbh Like This’

Sharing the glimpses of the event on social media, the Prayagraj Mela Authority said,

Today, Kumbh 2019 created a history, we attempted for “Most People Sweeping the Floor (Multiple Venues)”, in the Kumbh Mela area, Prayagraj and we made it to Guinness World Record.

With 2 Guinness World Records, Kumbh 2019 has already created history & today another attempt will be made for “Most People Sweeping the Floor (Multiple Venues)”, in the Kumbh Mela area, Prayagraj. #Kumbh2019 pic.twitter.com/DrNShOSHaq

The attempt for “Most People Sweeping the Floor” is not just a milestone to be accomplished but also a benchmark for all to celebrate cleanliness. It is a testimony that Swachh Kumbh was a success. A feat so big for Kumbh 2019, added the authorities.

The attempt for "Most People Sweeping the Floor( Multiple Venues)" is not just a milestone to be accomplished but also a benchmark for all to celebrate cleanliness. It is a testimony that Swachh Kumbh was a success. A feat so big for Kumbh 2019. #SwachhKumbh @GWR @UPGovt pic.twitter.com/84hJloyPHQ

Talking to NDTV about the record, an official from Guinness World Records said,

It was a rare sight to see so many people cleaning the floors together. It happened for the first time and it was different and unique in so many ways. This record is apt for Kumbh Mela keeping in mind India’s ongoing Swachh Bharat Mission, it will surely spread the word about the mission and its target in a positive way.

Giving the title of a ‘Hero’ to the sanitation workers, Sidharth Nath Singh, Cabinet Minister for Medical & Health ( UP) & Government Spokesperson speaking at the event at Kumbh added,

Safai Karamcharis (Sanitation workers) are India’s true ‘Heroes’, it is because of them we have achieved such a feat at Kumbh mela this year. I thank them all for their contribution towards swachhata at Prayagraj.

This is the third Guinness world record of Kumbh 2019, the two other records that were made was one for organising more than 500 shuttle buses on the highway as part of the biggest crowd and traffic management plan and second, was for the biggest hand painting exercise.

55-day Kumbh Mela is the largest human congregation in the world, with over millions of pilgrims participating in the festival. The Ardh Kumbh Mela started on the auspicious occasion of ‘Makar Sankranti’ on January 15 and will end today (March 4).