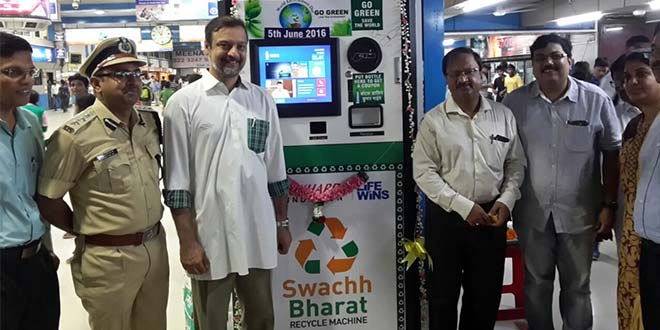 New Delhi: Plastic bottles which would otherwise end up strewn across railway platforms and tracks will now be managed effectively, as the Indian Railways has announced its plan to install plastic bottle crushing machines at 2,000 stations across the country. This green step has been taken keeping in mind India’s goal of becoming a plastic-free country by 2022. Giving details about the new green initiative by the Railways, a senior Railways official said,

According to a report in 2009 by the Comptroller and Auditor General, approximately 6,289 tonnes of plastic waste is discarded onto India’s railway tracks. In a bid to manage plastic menace, India Railways has taken this step. In general, plastic bottles consist of the maximum amount of plastic waste at the stations, keeping this point in mind, the railways have decided to place the plastic crushing machines.

This step will help prevent travellers from throwing used plastic bottles on the tracks or in the station premises carelessly.

How Plastic Crushing Machines At Railway Stations Will Work

Railways will be installing the Plastic Crushing machines at platforms and at exit points of the railway stations so that passengers who want to discard their plastic bottles can deposit them in the flaking machine.

These machines which are in the size of a refrigerator will start working as soon as people deposit their plastic bottles in it. First, through a sensor, the machine will check whether the material inserted is a plastic bottle or not. If it is a plastic bottle, only then the machine will disintegrate it into fine pieces of plastic which will then be sold as scrap in the market or will be used to manufacture bags and t-shirts in a bid to effectively recycle plastic.

Each machine has a capacity of crushing around 5,000 plastic bottles per day and the facility can be used multiple times.

The problem with plastic bottles is that very few of them actually get recycled effectively. But with plastic crushing machines at least railways will assure the maximum recycling of plastic bottles that will further help in reducing the excess load of plastic from India’s already overflowing landfills, added the railway officer.

Currently, all 16 zones and 70 divisions have been instructed to install the plastic bottle crushing machines at 2,000 stations in the first phase. Indian Railways is also working on the process of making people aware about the initiative, the official said that once the process of installation starts, there will be mass awareness campaigns at the stations to guide people about railways new green initiative.

In the past, Indian Railways had installed the plastic crushing machine at the Vadodara Railway Station, the ninth busiest railway station in India. Taking a step forward, the railways also announced that passengers who will enter their mobile number on the machine after dropping a bottle into it will get a cashback of Rs 5 in their Paytm wallet.

Similar types of machines have also been installed at Dadar, Mumbai Central, Goregaon, Andheri, Santacruz and Bandra stations in Mumbai as a part of the green initiative started by Western Railway.

South Central Railways has installed the plastic vending machines at four stations – Kachiguda, Secunderabad and Nizamabad in Telangana and Vijayawada in Andhra Pradesh.

To Curb Open Defecation, Pune Village Communities Open Their Household Toilets For Wari Pilgrims To Use