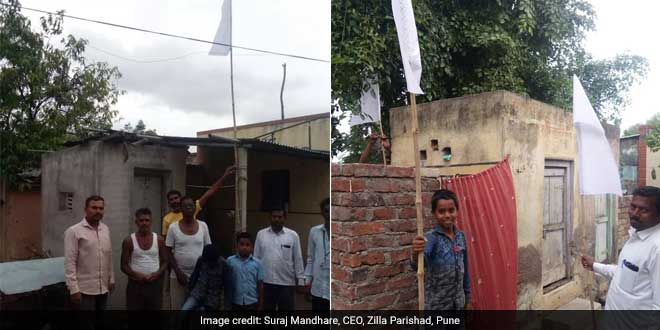 New Delhi: Every year, around 10 lakh pilgrims or Warkaris join the Palkhi or procession from Alandi in Pune to Pandharpur in Solapur (250 km route), a 333-year-old glorious tradition of Maharashtra, observed across the state during the Hindu month of Aashaad (around June-July). As part of the Wari pilgrimage, Warkari walk hundreds of miles to the holy town of Pandharpur, the seat of the Hindu god Vithoba or Vitthala. But every year, the holy pilgrimage end up being a hub for unsafe sanitation practices as thousands of pilgrims defecate in the open due to lack of toilet facilities. However, this year, the district administration with the cooperation of the residents alongside the procession route has taken a unique step to address the sanitation issue and provide access to more toilets.  People residing along the route of the famous Wari pilgrimage route in Maharashtra’s Pune have opened up their toilets for the use of pilgrims during their 15-day travel from July 6 to July 22.

According to the district officials, during the 250 km long walk, the pilgrims normally make around 15 halts on the route in certain villages.

Even though over 500 community toilets were set up on one route and 700 on the second route, they were never adequate enough to meet the requirement of the masses on their long walk.  Even the temporary or mobile toilets always fall short in catering to the pilgrims, of which women comprise a significant number. The challenge to provide toilet facilities to thousands of pilgrims was huge, said one of the district officials.

This year, the CEO, Zilla Parishad, Pune, Suraj Mandhare made an innovative appeal to the village communities of Khed, Haveli, Purandar, Baramati and Indapur talukas that falls on the Wari route. He requested all the households on the pilgrimage routes to offer their private toilets, most of which (around 2 lakh toilets) were constructed under the Swachh Bharat Abhiyan during the last two years, for the use of the Warkaris (pilgrims).

The appeal was made through block officials, gram sevaks and schools teachers, and the message also carried in newspapers and through posters. Since the procession is usually colourful with people carrying red and yellow flags, the district official also decided to install a white flag on every toilet to indicate that the toilet facility is freely available for the use of the weary travellers.

To my greatest surprise, people responded to this appeal overwhelmingly. It was decided that the appeal will be applicable to those who are using toilets under Swachh Bharat Abhiyan’s free initiative. But, several people, who have not even availed this scheme, responded positively. To showcase their consent and support, these villagers have erected white flags on their houses so that a Warkari can easily identify availability of toilets. Even the economically disadvantaged people are opening up their homes for the pilgrims so they can use their toilets constructed as part of the Swachh Bharat Abhiyan, the CEO said, adding that he is happy that the sanctity of the whole ceremony will be preserved during and after the pilgrimage.

Notably, the gram panchayats also passed resolutions to this effect.

The government has played a very small role, it is people themselves who are taking these steps and I applaud them for their magnanimity. With people open their homes to the visitors, the number of toilets offered will definitely exceed the number of community toilets available. And this year, we are hopeful that the annual pilgrimage will not only be celebrated with the age old enthusiasm but in terms of sanitation, it will also be cleaner and healthier at the same time, added the CEO of Zilla Parishad.

Towards A Zero-Waste Society: Thane Residents Get Three More Months To Start Treating Their Own Waste