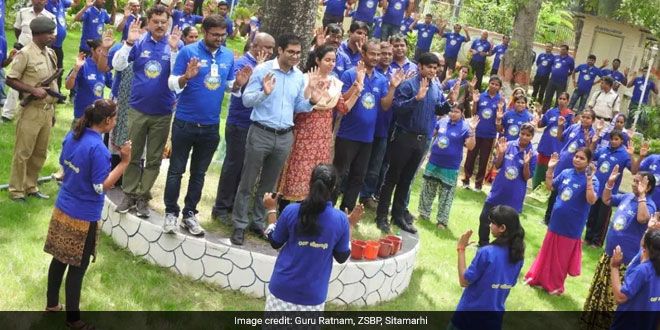 New Delhi: From being one of the poor performing districts in terms of sanitation coverage (21.3 percent in 2014 when Swachh Bharat Abhiyan was launched) to becoming Bihar’s first open defecation free district, Sitamarhi’s journey is no less than a sanitation revolution within Bihar. Soon after achieving the ODF status on July 17, Sitamarhi has already initiated ODF plus activities. One such activity was the Hand Washing Campaign that saw the participation of over 22 lakh people, including 13 lakh students and teachers of government and private schools.

We achieved the open defecation free status by inculcating behavioural change among the people. Massive awareness campaigns were launched to sensitise people about the need to have a toilet at home. Now that all the over 5 lakh (5,11,987) households in Sitamarhi boast of household toilets, our aim is to ensure that people keep using toilets, and adopt safe hygiene practices like washing hands.

People should know that lack of proper hand washing can get serious and diseases like diarrhoea, pneumonia and acute respiratory and skin infection are common when proper hygiene is not maintained… and children are the worst victims of lack of proper hygiene. To achieve this, we initiated this hand washing campaign. As part of this initiative, a number of trained swachhagrahis or motivators were sent out to homes to educate people to wash hands after a visit to the loo or before eating a meal. And to create mass awareness on handwashing, all government officials came together and organised hand washing ceremonies across the district, which saw participation from around 22 lakh people, Mr Ratnam added.

As part of this hand washing initiative, Sitamarhi’s District Magistrate Dr. Ranjeet Kumar Singh first went to Muradpur middle school and washed his hand along with school children and described hand washing methods. After this, Mr Singh went to other schools and gave information about the health benefits of washing hands before mid-day meals and after defecation.

We wanted all students and other people, particularly in the rural areas to learn the importance of handwashing and the positive difference it can make to their health. This simple behaviour of hand washing can save lives, reducing risk of diarrhoea and acute respiratory infections. Hand washing with soap impacts not just health and nutrition, but also education, economics, and equity. Hand Washing is an important component under the newly launched National Nutrition Mission, also advocated by UNICEF that highlights the fact that hand washing with soap is the most effective and inexpensive way to prevent disease, said Dr. Ranjit Kumar Singh, District Magistrate, Sitamarhi.

The event featured handwashing activities in schools as well as drawing and essay writing competitions in a few schools that focussed on the importance of handwashing.

Talking about why this campaign on hand washing was important for Sitamarhi residents, one of the district officials stated that diarrhoea and pneumonia are leading causes of death among children under the age of five, especially in flood prone areas like Sitamarhi, which is situated along the border of Nepal in North Bihar with rivers Lalbakiya, Baghmati, Lakhandeyi, Adhwara Samoh flowing from Nepal. In August 2017, 16 of the 17 blocks of Sitamarhi were fully submerged in flood water while one was partially submerged. As a result, each year during monsoons, developmental projects are stalled or delayed even as health problems are rife among the communities.

Sitamarhi district has a population of around 40 lakh of which over 95 per cent live in rural areas and are highly susceptible to diseases. The inculcation of hand washing habit among Sitamarhi residents will help them stay safe from diseases,” said one of the district officials.

Also Read: Swachh Shaadi For A Swachh Bharat: Bihar Couple Takes Lifelong Vows Of Cleanliness As They Enter A New Phase In Their Lives

Five Sports Stadiums In Delhi To Go Plastic Free, Will Be Marked On Cleanliness Quotient