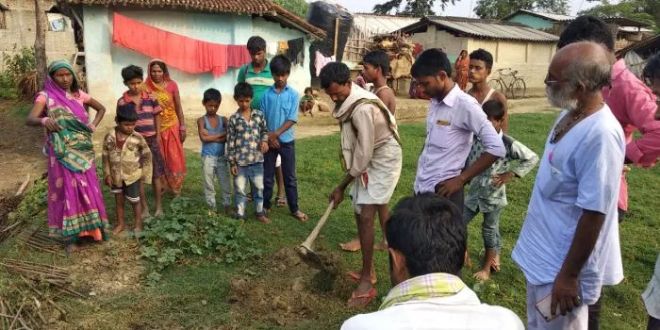 New Delhi: On June 11, residents of Bihar’s Sitamarhi district woke up early and got ready to not do their daily jobs but to bring in a sanitation revolution. Together, every villager, from children, women, to elderly, managed to dig as many as 56,754 pits for the construction of toilets – the ultimate aim of the exercise was to eliminate open defecation. This was done as part of the ‘Gaddha Khodo Shauchalay Banao Abhiyan’ (Dig Pits And Build Toilets) campaign initiated by District Magistrate, Dr. Ranjeet Kumar Singh, who himself dug 8 pits. The campaign aims at making every individual aware about cleanliness and hygiene prevailing in their respective surroundings and work towards improving the same through shramdan or voluntary participation.

Also Read: Swachh Shaadi For A Swachh Bharat: Bihar Couple Takes Lifelong Vows Of Cleanliness As They Enter A New Phase In Their Lives

Located near the Nepal border, Sitamarhi’s sanitation coverage before the launch of Swachh Bharat Abhiyan in 2014 was very dismal – a mere 21.3 per cent of the families in the district had an access to a toilet. Over the past three and a half years, the sanitation coverage has improved to 79.93 percent with the construction of over 3.11 lakh toilets. However, to make Sitamarhi open defecation free, a total of 1.10 lakh toilets are required to be constructed.

Massive awareness campaigns were launched to sensitise people about the need to have a toilet at home. Trained swachhagrahis or motivators were sent out to homes (without toilets) to convince the people, who have been going to fields and defecating in the open since ages, to build toilets and use them. The motivators also persuaded them to provide free labour for the pit digging campaign. Furthermore, all the district officials, teachers, Self-Help Groups (SHG) and non-governmental organisations along with the locals were trained to dig a pit. Also, a nodal officer was assigned to every 200 households to ensure that no household gets missed.

On June 11, the Gaddha Khodo Shauchalay Banao Abhiyan began in all 17 blocks of the district. And to show people that no contribution in Swachh Bharat Abhiyan can be small, the District Magistrate set an example during the inauguration of the campaign. He took part in the exercise and dug toilet pits on his own, while the other officials dug the pits across the other blocks in the district, said one of the district officials.

As part of the Gaddha Khodo Shauchalay Banao Abhiyan, we aim to dig a total of 1.10 lakh pits and we are hopeful of achieving to achieve our target in a couple of days. It was encouraging to see how people came forward and contributed towards this swachhta activity. The event showcased people-power and what the effective convergence of all government departments, private sector and the general public could achieve when they cooperate and work together for a nobel cause. Even the local politicians joined in and offered their support, said Guru Ratnam, Zila Swachh Bharat Prerak, Sitamarhi.