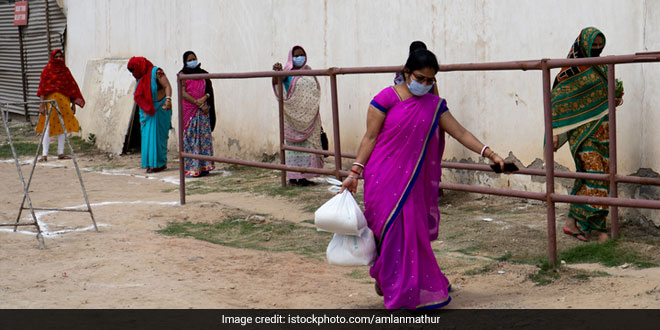 The scheme, which started when India went into stringent COVID induced lockdown two years back, was to end on March 31

New Delhi: The Modi government on Saturday (March 26) extended the scheme to provide 5 kg of grains free of cost to the poor by six months till September 30 at a cost of ₹80,000 crore, as it looks to continue providing support to vulnerable amid a rebound in the COVID-19 pandemic. The scheme, which started when India went into stringent lockdown two years back, was to end on March 31. In the last two years, around ₹2.6 lakh crore has already been spent under this scheme and it will cost another ₹ 80,000 crore with the extension of six months.

In March 2020, the Centre had launched the scheme — Pradhan Mantri Garib Kalyan Anna Yojana (PM-GKAY) — to provide free 5 kg foodgrains per person per month to over 80 crore beneficiaries covered under the National Food Security Act (NFSA) to reduce the hardships of people during the COVID pandemic.

In keeping with the concern and sensitivity towards poor and vulnerable sections of society, the Union Cabinet has extended the PM-GKAY scheme for another six months i.e, till September 2022 (Phase VI), an official statement said.

The government has spent approximately ₹2.60 lakh crore so far and another ₹80,000 crore will be spent over the next six months till September 2022 taking the total expenditure under PM-GKAY to nearly ₹3.40 lakh crore, the statement said.

The additional free grains are over and above the normal quota provided under the NFSA at a highly subsidised rate of ₹2-3 per kg.

Even though the COVID-19 pandemic has significantly abated and economic activities are gathering momentum, this PM-GKAY extension would ensure that no poor household goes to bed without food during this time of recovery, the statement said.

Under the extended PM-GKAY each beneficiary will get additional 5 kg free ration per person per month in addition to his normal quota of grains under the NFSA.

This means that every poor household would get nearly double the normal quantity of ration, the statement said.

The government had allocated about 759 lakh tonnes of free grains under the PM-GKAY till Phase V.

The benefit of free ration can be availed through portability by any migrant labour or beneficiary under One Nation One Ration Card (ONORC) plan from nearly 5 lakh ration shops across the country. So far, over 61 crore portability transactions have benefitted the beneficiaries away from their homes.

For this record production in the agricultural fields Indian farmers -‘Annadata’ deserves to be complimented, it added.

This scheme has been extended several times with the recent one until March 2022.

Initially in 2020-21, the PMGKAY scheme was announced only for a period of three months of April, May and June 2020 (Phase-I). Later, the government extended the scheme from July to November 2020 (Phase-II).

With the COVID crisis continuing in 2021-22, the Centre in April 2021 had re-introduced the scheme for a period of two months of May and June 2021 (Phase-III) and extended it for another five months from July to November 2021 (Phase-IV).

In the beginning, the government had also distributed 1 kg of pulses under this scheme, but it was discontinued later.

Why Does WHO Consider Air Pollution A Public Health Emergency?