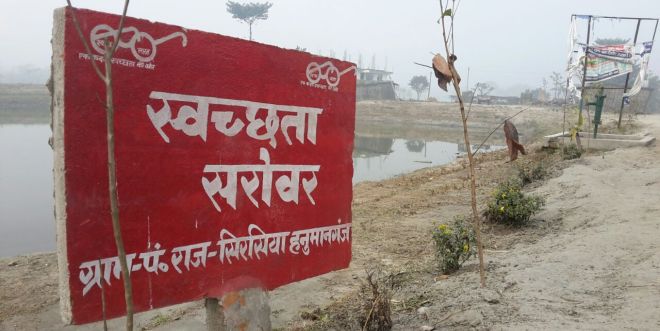 New Delhi: In Araria, one of the poorest districts of Bihar where 93 percent of the population lives in rural areas (713 villages) according to the survey done by Ministry of Minority Affairs, the Sirsia Hanumanganj gram panchayat of Bhargama block not only became the district’s first open defecation free gram panchayat but has also turned its prime open defecation site into a beautiful swachhta (sanitation) park. All thanks to the painstaking efforts of the residents and local administration, Sirsia Hanumanganj has now become an inspiration to other villages of the Araria district, one of the 115 aspirational districts selected by NITI Aayog that are lagging on specific development parameters.

In Sirsia Hanumanganj, situated roughly 40 kms towards the west of the district headquarters, open defecation was rampant and widely accepted as a norm by the community. “Under these circumstances, sensitising the community about the ill effects of open defecation and convincing them to construct toilets at home was an enormous challenge for the Block Development Officer (BDO) Rekha Kumari and other Swachh motivators,” recalls Bhushan Shah, Zila Swachh Bharat Prerak of the Araria district.

However, this became possible with the help of 19 Swachhagrahis who were trained on the community led total sanitation (CLTS) approach by the district officials. These Swachhagrahis carried out triggering activities like ‘walk of shame’ (walking with community to the sites of open defecation), putting faeces on the floor in front of people and discuss the way flies move between food and faeces and how they are unknowingly eating faeces which has a negative impact on their health, putting some faeces into a water bottle and asking community if they would drink it, to stimulate a collective sense of disgust and shame among community members. As they confront the crude facts about mass open defecation and its negative impacts on the entire community, they get convinced to construct toilets and adopt safe sanitation practices.

As part of this triggering exercise, we used to collect the human waste from the surrounding open defecation site and keep it alongside the food items on a table in front of the community members. Shortly, the flies used to sit on the human waste and then on the food items as well. After seeing this, the people realised the hygiene issue. The goal of this exercise was to help community members see for themselves that open defecation has disgusting consequences and creates an unpleasant environment, said Mr Shah.

Once the people agreed to construct toilets, the district administration also helped them with providing trained masons to construct cost-effective and ecologically friendly twin pit toilets. And once the toilets were constructed, to ensure consistent usage, morning and evening follow-up exercises were also undertaken by the BDO and her team. With all these efforts, the gram panchayat was declared ODF in December 2017 and is today has become a model swachh village.

In terms of the Swachhta park, it was developed on government encroached land and is now being used for various community programmes. The district officials recently used the park to celebrate the Republic Day on January 26. This was done to showcase the people that it is with their efforts the swachhta park became a reality. 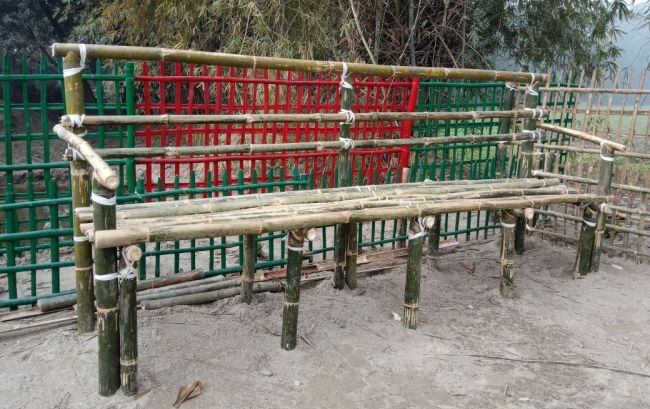 Speaking to NDTV about the Swachhta Park, Mr Shah stated that we rejuvenated two village lakes, which were previously used as a permanent defecation sites. “With the help of MGNREGA funds, the unskilled labour was employed to clean the two lakes and beautify the surrounding area in around 45 days. Furthermore, the BDO and Mukhiya of the village, Nirmala Devi along with other women carried out a series of works that totally changed the topography of the village,” Mr Shah further added.

According to the district officials, Sirsia Hanumanganj is an example to showcase how the officials and the village president (Mukhiya) used several other government schemes to make the gram panchayat clean and open defecation free.

Post the success of making Sirsia Hanumanganj ODF, the district officials are now planning to rejuvenate other villages in the Bhargama block. Notably, the block administration also has plans to construct a sanitation school within the Bhargama Block office compound that would house a display of different toilet technology options; a rural sanitary mart; a training centre and a district resource centre that would be used to provide one day training and exposure visits to villagers and Panchayati Raj Institutions (PRI) members working for the Swachh Bharat Abhiyan.

Currently, only three of the 218 gram panchayats in this flood-prone district have been declared open defecation free. However, the government is hopeful to make the whole Araria district ODF by March 2019 with the support of the people.

Despite Current Problems With Waste Management, Mysuru Aims For Zero Waste To Landfills