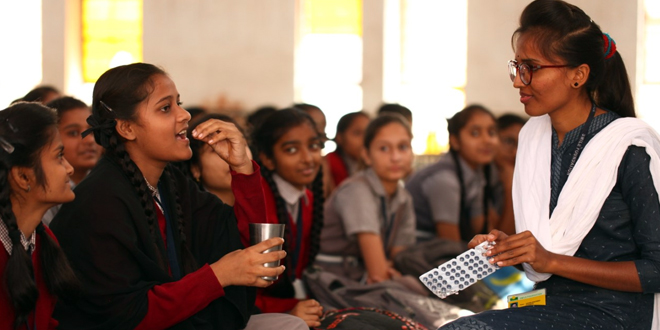 New Delhi: Until last year, 18-year-old Sonal, from Karaza village in Banaskantha district of Gujarat, would eat only onions and potatoes in all the three meals, through the day. The lack of consumption of nutritious food was one of the reasons behind Sonal being anaemic and having Haemoglobin (Hb) levels as low as 8.8 gm/dl, as opposed to the ideal Hb of minimum 11 gm/dl. Sonal represents what is the reality of most women in India. According to the National Family Health Survey 4 (2015-16), 53.1 per cent of women (15-49 years) in India are anaemic. Though the number has come down from 55.3 per cent in NFHS 3 (2005-06), still over half the women covered by the survey have been found to be anaemic and not many are aware about their condition. Experts believe anaemia can be acute to fatal. People with severe levels of anaemia may face cardiac attack and can die due to complications. Pregnant women if anaemic can witness impediments during delivery.

Sonal had moderate anaemia, which was diagnosed only on an investigation as part of an assessment carried out by Smile Foundation, a Delhi based NGO. In April 2018, Smile Foundation conducted a baseline study to assess the nutritional status of 1000 adolescent girls belonging to the age group of 14-19 years in 10 villages of Banaskantha district, the second largest district in the state of Gujarat. The study revealed that Sonal is not the only anaemic girl in her village or nearby villages; infact, 78 per cent of adolescent girls had mild to severe anaemia (low Haemoglobin (Hb) levels), mirroring what National Family Health Survey 4 (2015-16) found – 51.3 per cent of women (15-49 years) in rural areas of Banaskantha district, where the majority of the population resides, are anaemic.

It also stated that 70-80 per cent of the 1000 girls surveyed, relied only on potatoes and onions for their daily nutritional requirements. Also, close to 84 per cent of the respondents have never consumed any multi-vitamin or iron folic acid (IFA) supplements, and neither do they have any knowledge about anaemia nor have they ever got their Hb levels tested.

To address the issue of anaemia, Smile Foundation along with a private donor launched a pilot project ‘Sampoorna’ focused at increasing the Hb levels among the target group by improving the nutritional status. As part of the project, training centres were started in 10 target villages, where girls, mothers and anganwadi workers (anganwadi is a rural child care centre in India) are given nutrition enhancement classes. 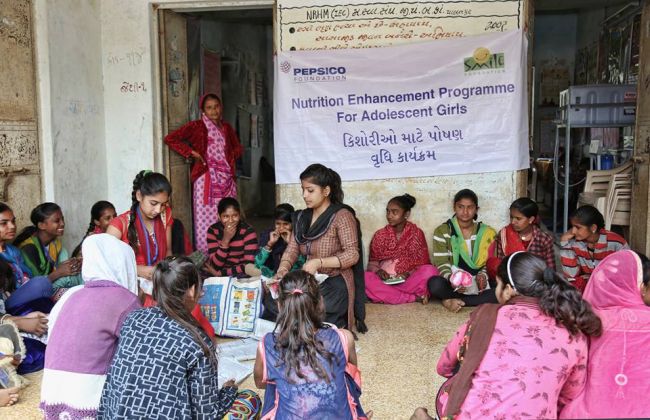 During our interaction with the girls and mothers, we encountered that girls living in a hostel would eat whatever they got, even vegetables and legumes they don’t like, because of the lack of options available to them, but the majority of the girls (living with family) would resort to potatoes and onions only. Also, some of the villages didn’t have much access to a variety of vegetables, says Yogita Ranawat, Programme Manager in Banaskantha District, Smile Foundation.

To inculcate eating habits with diverse nutrients in the community, the team introduced kitchen gardens at the centres where the girls are taught to grow organic vegetables in their backyard and the nutrition value of different vegetables. Taking this a step ahead, the team also distributed vegetable seeds so that these girls can have their personal kitchen garden which will not only address their nutrition needs, but their family’s as well.

When our facilitator Daiben Thakur asked about my favourite vegetable, I instantly said onion and potato. I was told that onions and potatoes are not vegetables, infact they complement other vegetables. Also, they are not rich in vital nutrients. That is when we were told about kitchen gardening, our direct source of green vegetables like bottle gourd, spinach, and others. Now I grow vegetables in my backyard and everyone in my family enjoys eating them. My Hb has also come up to 11.8 gm/dl, says Sonal.

To supplement the girls’ diet, along with the right amount of guidance, the team also provides a nutritious ‘ladoo’, prepared by Michelin Star Chef and Smile Foundation’s Nutrition Ambassador, Vikas Khanna, free of cost. The ladoo, an easy to make and low cost supplement has been made using locally available ingredients like jaggery, sesame seeds, drumstick leaves, ragi and maize flour. The ladoo is given to the girls thrice a week and they are supposed to consume it in the centre itself.

Also Read: This NGO Is Aiming To Eradicate Anaemia Among Adolescent Girls In A Gurgaon Community

In July 2018, my Hb was 8.4 gm/dl and that is when I got to know what is anaemia and what can be the dangers of anaemia. To defeat anaemia, I started taking iron and folic acid (IFA) supplements, ‘ladoo’ and even green leafy vegetables that pack in vital nutrients like iron and the results are evident with my Hb rising upto 13.2 gm/dl, says 17-year-old Amiya from Banaskantha district of Gujarat. 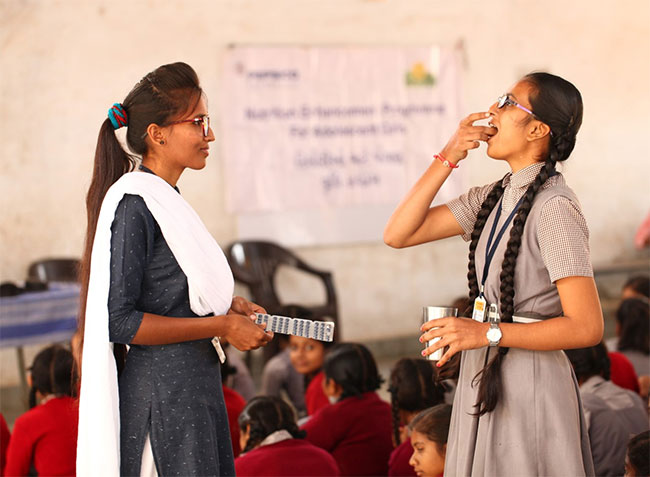 To eradicate anaemia among girls in Gujarat, they were given iron and folic acid (IFA) tablets along with nutritious food

Just like Sonal and Amiya, 1000 girls have benefitted so far through education and guidance provided under Smile Foundation’s Sampoorna project. In July 2018, when the project was initiated, the majority of the girls had Hb levels less than 8gm/dl and only a handful of them had Hb between 11-11.9gm/dl. After 16 months, majority of the girls had Hb between 8 to 10.9gm/dl, some even had it over 12gm/dl.

While the success of the pilot project has persuaded campaigners to extend it, Smile Foundation aims to take ‘Sampoorna’ not only to other villages of Banaskantha, but other states as well. The sole aim is to improve the nutritional status and create a domino effect.