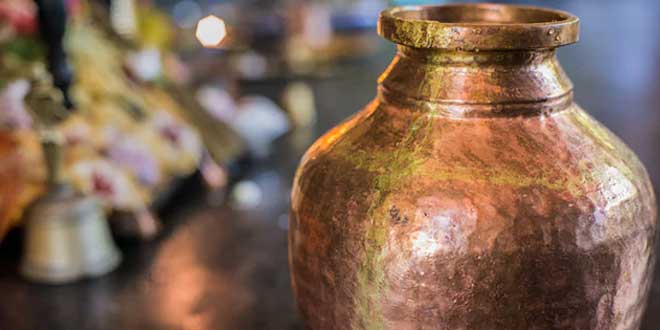 New Delhi: Traditional vessels and metal utensils make a comeback in Indore and will replace plastic bottles and single-use plastic objects in government offices, public places and even at private functions. The Indore Municipal Corporation is hoping that by tossing out plastic bottles and disposable plastic items, the city may not just reiterate its dominance among cities when it comes to effective waste management, but also grab the honour as India’s cleanest urban area for the fourth time in a row. Asad Warsi, Indore Municipal Corporation’s adviser for `Swachh Bharat Abhiyan’ told NDTV,

We provide water in copper ‘lota’ or steel or glass tumblers. We serve snacks in metal or glass plates. We have banned plastic water bottles, cups, and plates at major government offices.

He further said that Indore Municipal Corporation was the first government office in the city to replace all the plastic bottles and cups with ‘lota’ (a small pitcher) and metal water bottles. These ‘lotas’ and bottles can be refilled and reused as many times as required. Other government offices and departments followed the corporation’s footsteps to reduce their plastic footprints. He said,

The offices are purchasing these utensils. Even citizen groups and non-governmental organisations have started donating metal bottles to small offices, shopkeepers and people. The corporation has started receiving support for this initiative from everywhere. We are confident that this move to eliminate plastic bottles can be popularised among people and can be turned into a people’s movement to shun the use of plastic in general.

Disposable plastic water bottles, spoons, forks, glasses, and plates have also been banned from the market and all government offices. As per Mr. Warsi, copper ‘lotas’ to serve water are becoming fashionable at private functions too.

Talking further, about the ‘No plastic’ at government offices, Mr. Warsi said that the peons and cleaning staff in offices have been given the responsibility of maintaining hygiene and cleanliness of utensils. He further said that the corporation will be installing automated dishwashers at major government offices and market places in the city. He said,

We are also planning to install big automated dishwashers at market places where food joints are present to achieve zero-waste markets. We have identified three agencies that are willing to install dishwashers at some identified spots and at a minimal service fee basis, they will collect the utensils, wash those, sanitize and return to the respective shops and offices.

According to Mr. Warsi, using dishwasher will not only ensure a continuous supply of clean utensils but will also help in saving water as the water requirement in the automated dishwasher is only 20 per cent of what is being used for cleaning under a running tap. He said,

We are concerned about the shortage of water in different parts of the country. Therefore, whenever we do any planning, we try to take care of all aspects related to a particular problem and based on that we come up with a solution. Using a dishwasher will actually reduce the water usage for cleaning utensils.

With support from CSR (Corporate Social Responsibility) initiatives of some private firms, the Indore Municipal Corporation has started ‘Bartan banks’ where metal utensils are provided free to the citizens. Mr. Warsi said that this initiative has been started to take the efforts to eliminate plastic use, a step further. He said,

We have established two ‘Bartan banks’ till now, one each at Bengali Square and Sukhlia. The corporation is in the process of establishing 17 more at common places in the city.

Each ‘Bartan Bank’ has more than 3,000 utensils and anybody in the area who needs utensils for get-togethers/function/parties can go to the bank and take the utensils as per their requirements. He said,

The people can issue utensils for free, use those, clean and return. In case a utensil is damaged or lost, then we have put in rate to recover the loss. 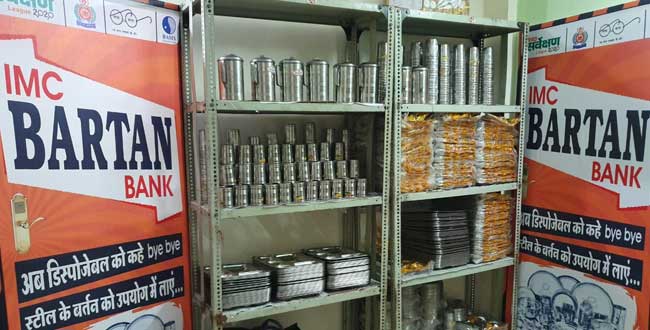 By pushing for shunning single-use plastic to reduce plastic waste, Indore Municipal Corporation hopes to become the cleanest city of India for the fourth time in a row

Vishal Kulkarni, a resident of Nanda Nagar, Indore who used the utensils available at ‘Bartan Bank’ once for a party at his home, applauded the efforts of the urban body. He said,

It is a very good initiative by the municipal corporation. It is not only reducing waste that is generated by disposable cutlery but is so much cost-effective for us users. I have used the utensils from ‘Bartan Bank’ once for a party at home. I will be using it again and will definitely recommend others to use it instead of buying disposable plates, glasses, and cutlery.

Another resident Vanita Bhatre, from Goyal Vihar, Indore was happy with new steps being taken by the civic body to stop the use of plastic which takes hundreds of years to decompose. She said,

I am definitely very happy to see my city working on another initiative to eliminate waste. I am proud to say that I live in the cleanest city in the country and this ‘Bartan Bank’ is another thing that is adding to the shine of the city.

According to Asad Warsi, Indore Municipal Corporation’s adviser for ‘Swachh Bharat Abhiyan‘, the city which has a population of more than two million generates 600 tonnes of dry waste daily. As per him, one-fourth of the waste generated (150 tonnes) is the plastic waste. To deal with this waste, the municipal corporation is in the process of installing a fully automated 300-tonne capacity plant for segregation of plastic waste and recycling.