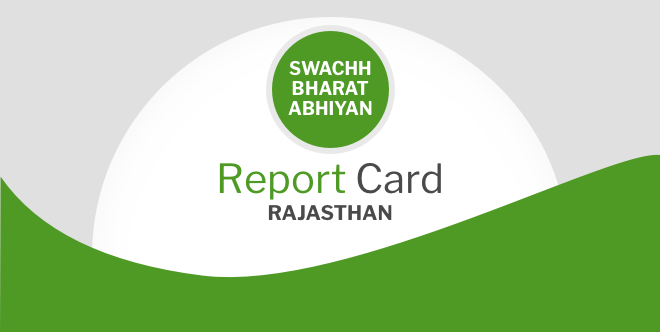 New Delhi: It was sometime in late 2016, when Prakash Rajpurohit, District Collector of Alwar in Rajasthan, arranged for a seminar on Swachh Bharat Abhiyan. The district was struggling with sanitation coverage of less than 50 per cent, and despite Rajasthan being one of the best state performers under Swachh Bharat Abhiyan, Alwar remained a poorly performing district. The seminar ended with Mr Rajpurohit urging district officials and local leaders to participate in constructing more toilets in Alwar, and raise the district’s sanitation coverage. After a year of active participation by locals and district officials, Alwar today has become open defecation free (ODF), like all other rural districts in Rajasthan.

Success stories related to sanitation are aplenty in Rajasthan. From Alwar’s large scale local participation, to Dungarpur’s determined women who decided to build toilets on their own, Rajasthan’s sanitation success story owes a lot to its people. Rural Rajasthan is completely open defecation free, and total of over 76 lakh (76,42,490) toilets have been built in the state till now. In October 2014, when the Swachh Bharat Abhiyan had begun, Rajasthan’s rural areas had sanitation coverage of mere 29.74 per cent. The miraculous Swachh turnaround in Rajasthan is a direct result of large scale popular participation, efficient administrative decisions and extensive campaigning which focused on the positives of having access to safe sanitation. Over 42,000 villages have been verified in Rajasthan to be ODF.

Rural Rajasthan’s open defecation free status is an achievement made possible by administrative officials and local people working together. The challenge of Rajasthan being an arid state did not deter people in both administrative and local levels to construct and use toilets. Toilet building is an exercise in itself, and Rajasthan has braved all odds to make every district ODF, said Arushi Ajey Malik, Director, Swachh Bharat Abhiyan (Gramin), Rajasthan.

One of the two major challenges faced by district officials was ensuring that households in arid districts received adequate water supply. Over 70,000 households in arid districts of Alwar, Barmer, Karauli and others have been covered by piped water supply between 2014 and 2018. This has ensured that toilets built under Swachh Bharat Mission (SBM) and gradually bring in a culture of behavioural change in the state’s districts. But the challenges of an arid state like Rajasthan are never ending, and though piped water supply has been installed in many households, continuous supply of water in them remains a challenge.

The second challenge Rajasthan faced was allegations of coercion in some districts. In 2016 and 2017, a number of complaints rose against certain district officials, alleging that in order to meet the ODF deadline, they coerced villagers into building toilets. From denying rations to negating guaranteed employment under the Mahatma Gandhi National Rural Employment Guarantee Act (MGNREGA), district officials had allegedly forced villagers in many villages to build toilets. The state Panchayati Department had launched an enquiry into the alleged coercions, though no official has been convicted yet.

Sanitation is a behavioural act, and using toilets should come to people naturally. The allegations of coercion in Rajasthan are being probed, and officials if found guilty should be duly punished. There is no way something like building toilets should be forced upon people. If the government cannot convince people to use them, the fault lies in the explanation, not the people, said Ajay Sharma, Vice President of Rajasthan Gramin Vikas Sangathan, an NGO working for rural development in the state.

On the urban front, Rajasthan’s progress has been good, as all 191 urban local bodies (ULBs) have been declared ODF. Major cities like Jaipur, Jodhpur and Bikaner have become ODF. Across the state, over 3 lakh (3,31,949) individual household toilets have been built in cities and 18,351 public and community toilets have been constructed across the state since October 2014. Two of Rajasthan’s major cities, Jaipur and Udaipur, performed well in the annual clean city survey, Swachh Survekshan 2018. Jaipur was ranked 39th this year, compared to 215 in 2017, while Udaipur jumped 225 positions to rank 85th from last year’s 310.

Despite being ODF in rural and urban areas, usage of toilets is an area where Rajasthan would like to improve its performance. A study undertaken by the think tank Centre for Policy Research (CPR) observed nine gram panchayats in early 2018, and noted that 38 per cent of the population in those nine gram panchayats practised open defecation. The reasons ranged from not being habituated to using toilets to not using them due to fear of maintenance cost burden. Lack of awareness about toilet construction and usage has been identified as primary reasons why over one-third of the people in surveyed villages continued to defecate in the open. Rajasthan spent only 3 per cent of its Rs 56 crore budget on Information, Education and Communication (IEC) activities.

“A lot of toilets in the state were built without adequately explaining their usage and utility. While the performance of some districts has been impressive, many villagers in the state are still not regularly using toilets as the behavioural change has not come. The government has done the job of building the toilets, but must ensure that issues related to their non-usage are addressed and resolved so that majority of the state does not revert to open defecation,” said Farrukh Rahman Khan, Regional Manager (North), Water and Sanitation, WaterAid India.

Talking about the CPR survey, Anand Kumar, State Secretary for Rural Sanitation, said that all the districts were monitoring their ODF status closely, and awareness activities were being conducted simultaneously to ensure that people don’t revert to open defecation.

If numbers are anything to go by, Rajasthan’s performance in the Swachh Bharat Abhiyan has been impressive. Across the state, instances of people helping each other to put an end to poor sanitation conditions have been witnessed. In Kota, local police were assigned to motivate people to build toilets and police officials went from door-to-door to spread awareness or in Dungarpur where women took it upon themselves to construct toilets. But the pace of toilet construction may have had an effect on communicating the message of Swachhata and toilet usage to people. Persistence of open defecation in an ODF state will defeat the hard work done by Rajasthan in four years of Swachhh Bharat Abhiyan. The state will need to address all these concerns before the national deadline of October 2019, to truly emerge as a success story of the Swachh Bharat Mission.

Also Read: A Farmer In Rajasthan Builds 780 Toilets In 35 Days To Make His Village Open Defecation