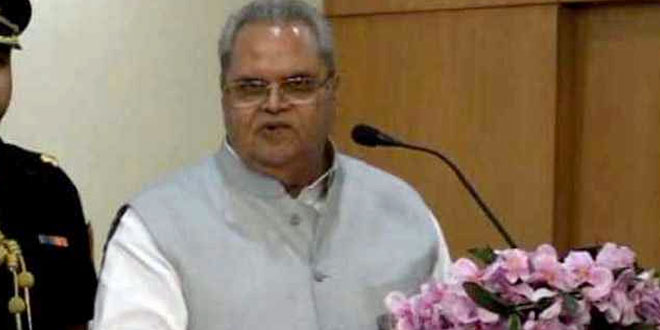 Srinagar: Jammu and Kashmir Governor Satya Pal Malik Saturday declared the state open defecation free (ODF) and launched the “Swachhta Hi Seva ” – a fortnight-long cleanliness campaign for public awareness and involvement of community. At the launch of “Swachhata Hi Seva” campaign at the Sher-i-Kashmir International Conference Centre (SKICC), an official spokesman said the state was self-declared as ODF by the Governor Satya Pal Malik. He said the Governor congratulated the state administration for efforts in making the state “100 per cent ODF”. Mr. Malik observed that due to sustained efforts of all the stakeholders, Jammu and Kashmir has achieved 100 per cent toilet coverage and has become ODF “one year in advance”.

All the 22 districts, 4,171 gram panchayats and 7,565 villages in the state are self-declared ODF as per Swachh Bharat Mission (Grameen) SBM (G) guidelines,” the spokesman said.

He said apart from constructing 1.1 million individual household toilets (IHHLs) and 1,350 community sanitary complexes in the state, the Swachh Bharat Abhiyan has played a vital role in bringing about behavioural change in the people.

The Governor emphasised on the high importance of cleanliness in ensuring overall well-being of families and communities and expressed concern for the women folk who suffer from health ailments due to lack of toilet facilities at homes.

According to the spokesperson, Mr. Malik invoked Mahatma Gandhi to spread the message of cleanliness and hygiene. The Governor said ensuring cleanliness of all the water bodies and lakes, cities, towns and villages of the state and formulating a sustainable solid and liquid waste disposal programme would be one of the priorities of his administration.

He said his administration will ensure uninterrupted supply of electricity during festivals and examinations, the spokesperson said. The Governor expressed concern over non-availability of avenues to youths for pursuing their hobbies and showcasing their talents and said he is working with IPL chairman Rajiv Shukla on the idea of having an IPL team for Jammu and Kashmir and noted that IPL matches will be played in the state soon. He also reiterated his commitment for strengthening sports infrastructure in the state with construction of stadiums in all districts having state-of-the-art facilities.

Plastic Crisis: More Than 20 Sea Turtles Killed In Less Than 2 Months From Plastic Wraps In Thailand