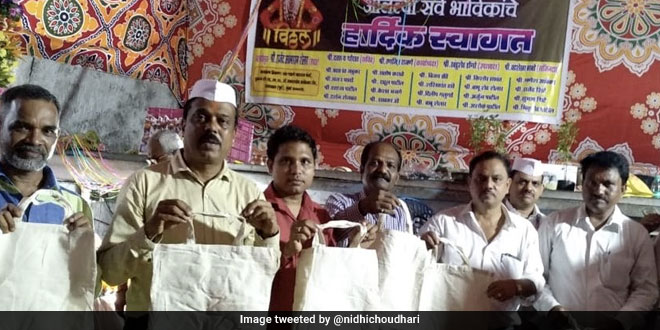 Mumbai: As soon as the clock hits 5 am, hundreds of vegetable vendors crawl on to the narrow lanes of Dadar’s sabzi mandi (wholesale vegetable market) to sell as much produce as they can and earn maximum profits. The famous Dadar market in Mumbai which serves as a livelihood for many, feared a loss in business after the Maharashtra government imposed a ban on single use plastic items including plastic bags on June 23. A month later, the market is functioning at the same pace, but this time without using plastic bags.

On June 23, the plastic ban was enforced in India’s second most populous state of Maharashtra. In last one month, there have been many products that were originally included in the ban but were removed from the list like all kinds of plastic bottles, plastic used to manufacture products, plastic bags used to store food items at groceries and so on.

Amidst the growing confusion around items included and excluded in the state-wide plastic ban, the authorities in Mumbai are leaving no stone unturned to implement the ban effectively by regularly conducting raids and inspections.

As Mumbaikars adapt to the new change in their lives and whole-heartedly help the government make the ban a success, NDTV spoke to people directly and indirectly affected by the ban. Here’s how the plastic ban is faring, one month on.

Close to 700 vegetable vendors operate out of the Dadar market and only a month back nearly a tonne of plastic bags was being used daily to pack the vegetables. While most of the vendors have switched to cheap cloth bags, some are reusing discarded newspapers to wrap the sabzis. However, the big switch came at a cost says one of the vendors.

On the very first day of the ban, the inspectors came to examine the market and many were fined for still using the plastic bag. To avoid paying the fine, we ordered cloth bags in bulk that costed us two times higher than plastic bags. 25 per cent of my profits went in purchasing the cloth bags. If we try to recover the cost by charging for the cloth bag or by raising the price of sabzis then we lose customers, says Amarchand Gupta, who owns a stall at the market.

The situation in Goregaon’s Sahkari Bhandari, a wholesale market, is quite different. All the vendors have unanimously taken a decision of not giving plastic bag at any cost as this way the fear of losing customers is eliminated.

We provide vegetables and fruits in newspapers. Since it is the monsoon season, many customers complain that newspapers tear or get soggy. But we have decided to not succumb to such pressures and instead we are forcing them to carry their own bags, says Shakeel, one of the vendors.

To ensure that the delivery system remains unaffected, vendors in Vasai Bhaji market spent extra money to purchase big cloth bags, “We have around five cloth bags that can carry more than 10 kilos of weight. We deliver the vegetables in the bag and take back the bag,” says Santosh Dhasal, a vendor who has been in the business for 20 years.

As most of the vendors are giving up plastics out of fear of punishment, many vendors are still openly using plastic bags like the ones sitting on Mathuradas road in Kandivali.

“I have not seen a single inspector from the Brihanmumbai Municipal Corporation (BMC) in the last one month. Customers are also not getting bags from home and I get plastic bags at very cheap rates. If the inspectors come, then I will have to make alternative arrangements but till then I don’t mind using plastic bags,” says 43-year-old Manda Patel, a vegetable vendor.

A major tourist attraction, Girgaon Chowpatty beach, caters to thousands of visitors everyday with 47 stalls serving some delectable street food delights of the city. From golas – an ice-based dessert, sandwiches, paani puri, dosas to vada-paav, nearly 50 food items are daily served. Until a month back, the stalls used plastic cups, glasses, plates, cutlery. Now, with the plastic ban in place, most of the stalls have stopped using plastic items and switched to alternatives.

Golas or chuski are supposed to be served in a glass and honestly it doesn’t matter what the material is. Earlier I used to use plastic cups and now I serve in glasses, says Krishna Raj, who owns a stall right at the entrance of the beach.

When asked if his business has been affected in any way he is quick to reply with a no, “The plastic cups even though it costs less, I had to order them every day as I cannot reuse them. The glasses, which came at a high cost, I simply wash and reuse these.”

Another hawker at the same beach is facing trouble as he now has to use extra water to wash spoons he gives with faloda, a cold-dessert, “As it is we get limited water hence it is becoming difficult for me to arrange for extra water,” says Harish.

However, one good thing that has emerged from the ban is the cleanliness aspect of Girgaon beach. One of the BMC workers told NDTV that plastic litter is fading away with each passing day,

People often used to buy food from the stalls and stroll on the beach. On not finding a bin, they would casually discard the leftover near the sea. In the past few days, I am finding negligible plastic litter during my duty hours, the official comments.

While most of the street hawkers in Mumbai are complying with ban as they are able to find alternatives, coconut vendors are suffering tremendously. Since polybags are used for take-ways and straws to drink the coconut water, the loss is inevitable.

There is no other way to pack the coconut water and hence I still use the polybags. To the customers staying in nearby areas I request them to carry their own container. If the BMC cannot provide alternatives, then they must at least inform us about it. I don’t mind arranging alternatives myself but the question remains – from where? says Malik who supplies coconut water to over 100 families in Oberoi Garden city of Goregaon.

The success of implementing the ban among the vendor community heavily lies on the way consumers adapt to the change. Many vendors pointed out that if the consumers start to carry their own bags most of their problem will be solved. Getting rid of an old habit is hard but not impossible believe most of the Mumbaikars.

It is all about making a conscious choice. It has been more than a year since I completely stopped using plastic bags and hence the ban didn’t affect me in any way. It is not difficult to make a green switch. We just need to make cloth bag a part of our daily routine, says Chaaya Harsora, a housewife from Thane.

Echoing similar thoughts but with a demand for an exception, Uday Kulkarni, a businessman from Santacruz says, “Plastics come in handy during monsoons. The state government should have implemented the ban post monsoon. I cannot directly keep the wet umbrella in the office bag or in my car. Plastic bag is the best protection during rains.”

The BMC has imposed hefty fines on anyone found using banned plastic items in the city. While first time offender will be fined Rs 5,000, second and third time offender will have to pay Rs 10,000 and 25,000 respectively. The civic corporation has till now conducted several raids and imposed fines.

As per the latest figure 89,814 shops have been inspected of which 730 fined for banned plastic. 127 cases are filed in court for non-payment of fine and over 3,000 kilos of plastic has been seized.

Also Read: Tirupati To Impose A Ban On Plastic On Rashtriya Swachhta Diwas This Year