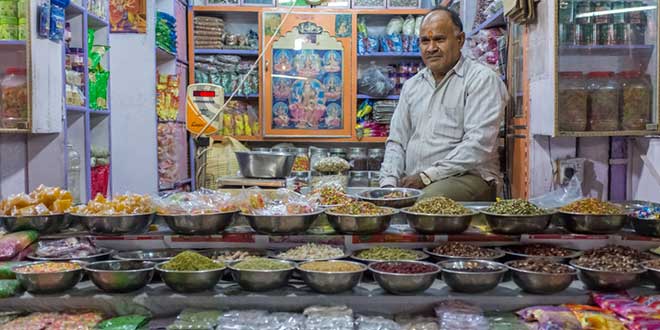 Mumbai: It has been less than a week since the plastic ban in Maharashtra was enforced on June 23 and it has already caused a 50 per cent drop in retailers’ business due to lack of plastic packaging alternatives and a fear of punishment, says the President of Federation of Retail Traders Welfare Association (FRTWA) Viren Shah. With such a heavy loss and an anticipation of a further drop in the business, the welfare association has threatened to strike if the government fails to reconsider the ban and allows plastic packaging in the next seven days.

Over 3 lakh kirana stores across Maharashtra are suffering from huge business loses. More than 2,000 kirana shops are closed in the state which has led to multiple problems including perishables items going to waste and sales of milk/juices going down by almost 25 per cent. said Mr Shah.

“We have given seven days to the government to fulfil our demands, otherwise with no option left we will be forced to go on strike,” he said further.

Well-aware of the plastic menace in urban spaces of the state, Mr Shah also suggested that the retailers will install garbage bins for carry bags outside their respective shops where customers can deposit their waste, “The government should either give us suitable alternatives or come up with recycling initiatives,” he said.

“Branded manufacturers, who package their products in multi-layer plastic which is harmful for environment, are being spared, while small traders are being punished for using transparent plastic bags which are recyclable and reusable. Plastic is plastic. Why are big companies allowed to use all kinds of plastics, but vendors are being charged for the same,” questioned dry fruit dealer Ramniklal Vithal.

Pointing out the dangers of using plastic by the big manufacturers, Mr Vithal further said, “Manufacturers use multi-layered laminates like those used for potato chips. These laminates cannot be recycled and has no buyback value. As a result, even the ragpickers ignore them and fetch plastic carry bags as they are recyclable.”

Talking about the losses garment shops are facing post the state-wide ban, Rajiv Singal, the trustee of Bharat Merchant Chamber, an organisation of textile manufactures said, “We understand the ecological significance and therefore we support the ban on plastics, but not the way it’s being implemented.”

The timing of the ban is not appropriate as the monsoons have set in. This is the time when people need plastic bags more, and traders for whom plastic materials are indispensable should have been exempted, he said.

Meanwhile, the Brihanmumbai Municipal Corporation (BMC) has so far collected over Rs 10.5 lakh in fine and seized 972.8 kilos of banned plastic items. The plastic squad of the BMC has made 13,501 inspection visits and issued Information Reports (IRs) to 26 establishments and individuals.

Also Read: Maharashtra Plastic Ban: How Prepared Are Wholesalers, Street Hawkers, Restaurants In Mumbai To Get Rid Of Plastic?