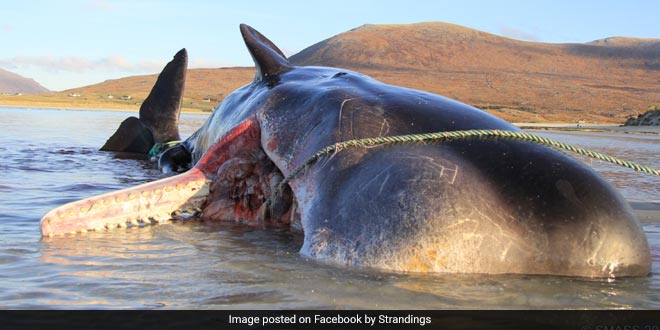 New Delhi: The omnipresence of plastic is turning out to be a bane for life on the planet. In what is turning out to be a disturbing regular occurrence another large sperm whale choked on 100 kilos of marine debris, including a huge amount of plastic waste, in Scotland. On Thursday (November 28) morning, Scottish Marine Animal Strandings Scheme (SMASS) found a 20 tonne, subadult male whale which live stranded (when whales strand themselves on land) and died on the Isle of Harris in Scotland.

By the time the team of Scottish Marine Animal Stranding Scheme found the subadult male whale, it had been dead for 48 hours. On investigation, approximately 100 kilos of marine debris including a whole range of plastic like sections of net, bundles of rope, plastic cups, bags, gloves, packing straps and tubing was found in the whale’s stomach.

All the waste was muddled up and found in a ‘huge ball’ shape and according to experts, some of the waste looked like it had been there for some time. 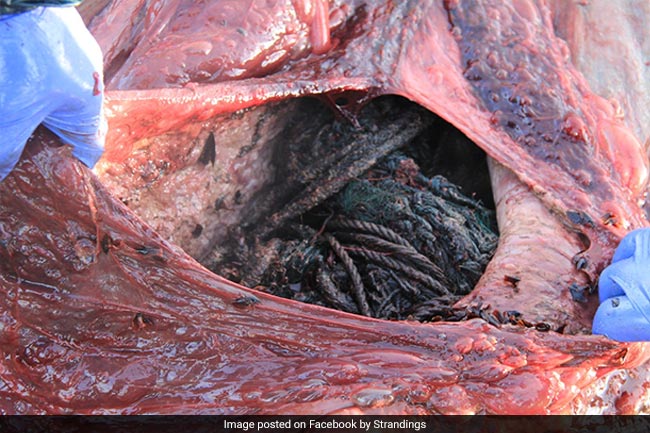 Inside the stomach of dead whale: Marine waste, including plastic balled up inside

Though there is no clarity on whether the cause of death of the sperm whale was the consumption of a huge amount of plastic waste or not, but according to the researchers, plastic was a cause of whale’s live stranding.

The animal wasn’t in particularly poor condition, and whilst it is certainly plausible that this amount of debris was a factor in its live stranding, we actually couldn’t find evidence that this had impacted or obstructed the intestines. This amount of plastic in the stomach is nonetheless horrific, must have compromised digestion, and serves to demonstrate, yet again, the hazards that marine litter and lost or discarded fishing gear can cause to marine life, read the information shared by Scottish Marine Animal Stranding Scheme on their Facebook page. 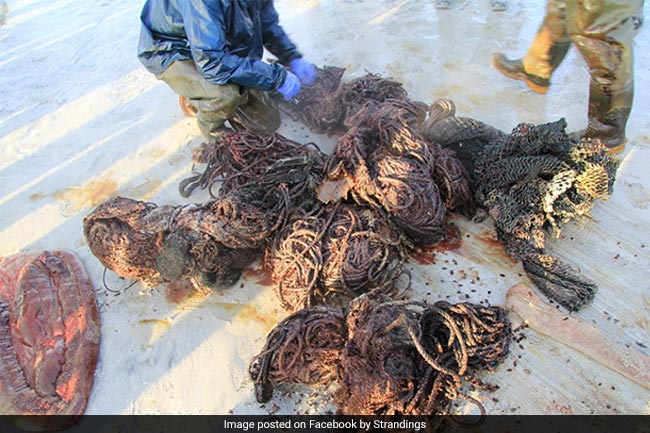 Post the autopsy at Luskentyre, a sparse settlement on the west coast of Harris in the Outer Hebrides, the whale was buried. The researchers are now trying to figure out why the whale consumed all the waste.

Also Read: A 10-year-old Deer In Thailand Dies After Choking On 7 Kilos Of Plastic Waste

Marine And Wildlife Losing To Plastic

Everytime an animal or marine species dies due to the plastic waste it highlights why plastic is such a crisis. Just three days before this incident, on Monday (November 25), near Khun Sathan National Park in Thailand, a wild deer was found dead after choking on 7 kilos of plastic debris. On inspection, though no external wounds were found but a variety of waste was found in deer’s stomach including coffee bags, instant noodle flavoring bag, plastic bags, rubber gloves, cloth, rope, straw, men’s underwear.

In 2018, a sperm whale, the largest of the toothed whales, had washed ashore dead on the Murcian coast in southern Spain after choking on 29 kilos of plastic debris. Later in June 2018, in a suburb called Basai in Gurugram on the outskirts of Delhi, a plastic ring got stuck in Black-necked Stork’s beaks for almost a week. The bird was forced to survive on the water as it couldn’t open its mouth to consume food.

These incidents are continuous reminders that we as a society need to shun plastic and manage the waste effectively before it engulfs us.