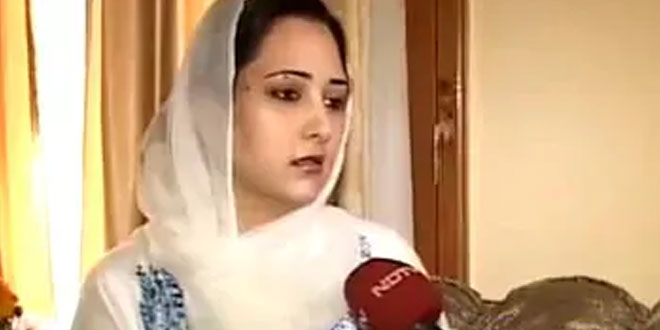 Srinagar: A 33-year-old Kashmiri woman IAS (Indian Administrative Services) officer has gone beyond her routine administrative duties to address an otherwise ‘forbidden subject’ of stress and isolation among young girls in Kashmir during their menstrual periods. Syed Sehrish Asgar, a 2013-batch Indian Administrative Service (IAS) officer, is the District Magistrate (DM) of Budgam. Ms. Asgar is the first woman DM (District Magistrate) of the district since it was formed in 1979. She organised the first-ever all-woman conclave at the district headquarters on Monday to address the problems faced by girl students during their menstruation.

The speakers dealt with the legal rights of women, domestic violence and sexual harassment at workplaces and informed the participants about various women-specific schemes and government initiatives under various departments.

The programme was attended by female officers of different departments, female media persons associated with national and state agencies and publications and portals along with scores of employees, students and female participants from diverse fields.

Ms. Qadir highlighted the Constitutional provisions and other legal rights and legislations enacted and provisions in CrPc (Criminal Procedure) and IPC (Indian Penal Code) regarding the enforcement of rights of women. Inspector Gulshana shared some life experiences of women’s harassment cases in the district.

Incinerators and vending machines were also distributed among government girls’ schools of the district along with distribution of sanitary napkin packs to orphan students. Ms. Asgar while speaking in the concluding session deliberated in detail about various levels of women empowerment as she stressed upon participants to take initiatives to break the taboo of female inferiority .

She said this is need of modern times that women be part of great changes society is going through and contribute more in social and economic development. She said it is incumbent upon a mature and just society to recognise the role of women and that society cannot be empowered as long as its women are not.

Also Read: If We Can Do It, Then Any Girl In The World Can Do It: Sneha, Suman Of ‘Period. End Of Sentence’ Gets Rousing Welcome

She also spoke about various issues confronting girls in schools like health and hygiene and steps the district administration is taking for empowering women. She further stressed for standing up without fear for enforcement of women’s rights, for taking initiative for career building, overcoming all environmental and family hindrances which may pull oneself down.

Speaking to IANS, Asgar said there has been an alarming 20 per cent dropout rate among girl students because they feel depressed, dejected and stressed during their periods, in a society where even speaking about such a normal biological phenomenon is frowned upon.

With hardly even a place where they can change their sanitary napkins in schools, colleges and other such places, the options become limited for girl students, and they stay home against their wishes, Asgar said, adding that she has decided to fight this out to assure girl students that there is nothing abnormal or unnatural about menstruation. She said

Toilets are either dysfunctional or broken without any privacy at most schools and colleges in our district. This has to change.

“We are installing sanitary dispensers and incinerators at 106 institutions including high and higher secondary schools, colleges, one ITI in Badgam district in addition to Srinagar International Airport and the district development commissioner’s office in Budgam town,” the DM said.

Interestingly, with no budget available for such an unconventional administrative initiative, Ms. Asgar has managed funds from the rural development department and the Airports Authority of India under the corporate social responsibility (CSR) scheme.

Repairs of dysfunctional and damaged toilets at various educational institutions have started. “With the support of parents and school and college administration we are hopeful that the dropout rate among girl students will be brought down to zero,” the energetic DM said.

Related Topics:
Jammu and Kashmir Menstrual Hygiene Menstruation In India
Up Next