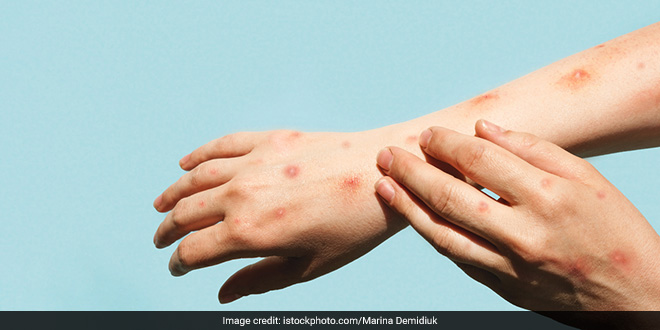 Public awareness is very necessary in the context of monkeypox, the health minister said

The Union Minister highlighted that when (Monkeypox) cases started appearing in the world, India had already started preparations.

Before the first case in Kerala, we had issued guidelines to all the states, he said.

The Health Minister said that it has been written to the governments at the international level that the screening report of the travellers should also be sent to the respective authorities concerned.

If someone in the family has had Monkeypox, then keeping a distance from him for 12-13 days is advised and thus, the spread can be controlled. With constant vigilance, we can control it well, he said.

Noting that the first case of Monkeypox in India was reported in Kerala, the Health Minister said,

When the case came to Kerala, we sent an expert team, helped the state government. Contact tracing was done. Just like we exercised caution in the case of COVID-19, we are also doing our best to implement what we learned in battling Monkeypox, Mr Mandaviya said.

Recalling that Monkeypox is not a new disease, the Union Minister said that since the 1970s, a lot of cases are being seen in the world from Africa.

WHO has paid special attention to this. Monitoring has started in India also, he said.

Highlighting that the Indian Council of Medical Research (ICMR) is willing to make available a vaccine to contain the impact of Monkeypox, the minister said,

For the first in the country, the monkeypox virus strain has been isolated by the Indian Council of Medical Research-National Institute of Virology, Pune. The institution has invited an Expression of Interest (EOI), proposing to hand over the strain to industry partners for the development of indigenous vaccine and diagnostic kits for the disease.

Days after the death of one person with Monkeypox-like symptoms in the state, another Monkeypox case has been confirmed in Kerala as a UAE returnee tested positive today. This is the fifth case of the viral disease in the state so far.

The 30-year-old patient is currently undergoing treatment in Malappuram, the health minister said.

He had reached Kozhikode airport on July 27 from the UAE and was undergoing treatment at the Manjeri Medical College in Malappuram, the minister said.

This is the fifth case of Monkeypox in the state.

Twenty people have been quarantined in the state’s Thrissur district following the death of one person with Monkeypox-like symptoms, officials said on Monday. Monkeypox is a zoonotic disease caused by the monkeypox virus, which belongs to the same family of viruses that causes smallpox. The disease is endemic in regions like West and Central Africa but lately, cases have been reported from non-endemic countries too, according to the WHO.