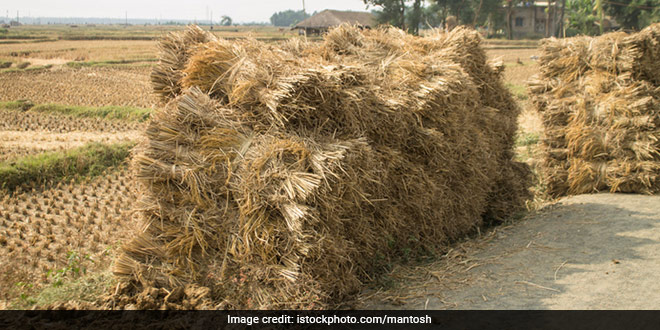 New Delhi: The Commission for Air Quality Management (CAQM) has asked Punjab, Haryana and Uttar Pradesh to formulate a policy to ensure continuous supply of paddy straw for ex-situ utilisation and co-firing in thermal power plants. Co-firing of paddy straw pellets (up to 10 per cent) with coal in thermal power plants is one of the important ex-situ stubble management strategies. Paddy straw is also used as in waste-to-energy plants, brick kilns and end products such as pellets, bio-fuels (bio-ethanol, compressed bio gas), particle board, panel furniture and packaging material.

Paddy straw burning in Punjab, Haryana, and Uttar Pradesh is a major reason behind the alarming spike in air pollution levels in the national capital in October and November.

Farmers set their fields on fire to quickly clear off the crop residue before cultivating wheat and potato.

The National Thermal Power Corporation Limited (NTPC), a potential major user of paddy straw in thermal power plants, had earlier told the commission that it is technically feasible to co-fire paddy straw-based pellets (5 per cent to 10 per cent) along with coal.

It informed that efforts have been initiated for the use up to 5 million tons of biomass pellets per annum in 17 plants.

The air quality panel has now directed the states to formulate a policy framework for “ensuring assured and continuous supply of raw material to plants utilising paddy crop residue”.

It also asked the states to utilise paddy straw pellets in their own thermal power plants in the NCR region “since huge quality of straw is available proximate to TPPs”.