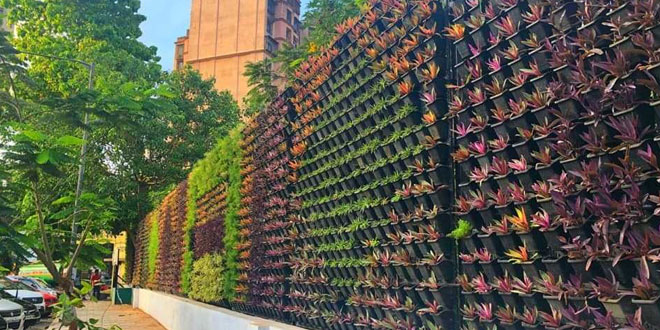 New Delhi: Mangroves that line up Mumbai’s Versova shoreline have been eroding due to the mindless dumping and burning of waste. But today an innovative solution to protect these mangroves was launched on the occasion of World Environment Day. According to UNESCO, everywhere mangroves are disappearing three to five times faster than overall global forest losses, and this has a serious ecological and socio-economic impact. In Maharashtra, a Mangrove Cell to conserve and manage the mangroves of the state was created by the government on January 5, 2012. The move to create this cell was pivotal as mangrove, an ecologically fragile stretch is critical for protecting shorelines, maintaining water quality, filtering pollutants and so on. In case of the Versova shoreline, the state forest department has created a natural barrier in the form of a bio-fence to protect the mangroves from garbage dumping. Bio-fencing is a large barrier – a frame made of iron with different kinds of plants embedded on it.

Talking to NDTV about the natural barrier created to protect mangroves, Dr Bharati Lavekar, MLA of Versova and also the brain behind the one of its kind initiative says,

We are the one who throws waste and then say that garbage has been accumulated at a particular place. Later to remove waste, people often put it on fire. The idea of bio-fencing is to simply stop open dumping of garbage and waste burning. This is the first time bio-fencing has been initiated in Mumbai.

A bio-fence is a frame on which plants are grown, which act as a barrier between mangroves and the road from where people usually throw waste. A 180 square metre stretch of mangroves in Versova is the first to get bio-fence with ferns like asparagus sprengeri, brown rhoeo, yellow rhoeo, and purple rhoeo.

Apart from acting as a natural barrier for mangroves, the bio-fence also helps in reducing carbon by absorbing carbon emissions from the vehicles and releasing oxygen, thereby decreasing the levels of air pollution, and noise isolation. Along with this, it helps in beautification of an area.

Talking about the idea and funds, Dr Lavekar says,

People of Versova have become used to dumping waste in mangroves. From wrappers to carton boxes, they would dump anything and everything. Every time I would see waste lying, I would think of a solution that could stop people from littering and at the same time make the place greener. That is how the idea of bio-fencing came in. As soon as I proposed the idea before Sudhir Mungantiwar, forest minister, he appreciated and whole heartedly accepted it. As far as finances are concerned, development funds allotted to my constituency and money from state mangrove cell are being used to create 180 square metre bio-fence. We have also installed CCTV cameras to keep a check on bio-fencing.

Today, on the occasion of the World Environment Day, the project was inaugurated by Afroz Shah, Champion of the Earth, UN Environment. While hoping for positive results and feedback from citizens, Prashant Deshmukh, Range Forest Officer, State Mangrove Cell says,

People throw waste only where they see some dirt or garbage already existing. Now when they will see greenery and beautified roads, their inner conscious will not allow them to discard waste openly.

After bio-fencing, the process of chain-link fencing wherein a mesh fence is formed using the steel wire to stop people from the dumping of waste, will begin to cover other mangroves of Versova.

From Government To Citizens, Everyone Come Forward To Save Environment

This is not the first time, a step has been taken to stop dumping of waste and in turn protect mangroves. In 2015, a lawyer-turned-environmentalist Afroz Shah, embarked on a journey to remove tonnes of garbage from Versova beach. After 160 weeks of clean-up, the beach is not only litter-free but it also started a conversation around waste management and cleanliness in the country. Taking inspiration from beach warrior Afroz Shah, various other beach clean-ups have been initiated in the city.

Related Topics:
Mumbai Waste-Free
Up Next

To Combat Plastic Pollution, These Companies Plan To Use Eco-Friendly Alternatives To Save The Environment