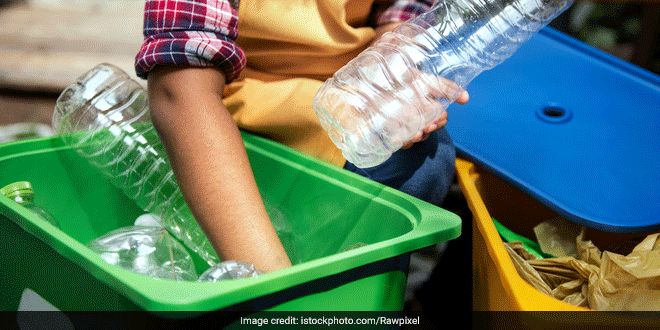 New Delhi: Plastic waste in India has become an increasingly pressing problem over the years. Reason is simple – the country generates around 15,722 tonnes of plastic waste per day but don’t have the required infrastructure in place to recycle and reuse such huge amount of plastic waste. Only 60 percent of the total plastic waste gets recycled, and the rest of it ends up choking the drains or in landfills. To ‘beat plastic pollution’, also the theme of the World Environment Day on June 5, India needs to focus not just on smarter and safer use of plastics, along with drastic reduction in single-use plastics but also on finding innovative ways to generate wealth out of this waste. According to an expert from The Energy and Resources Institute (TERI), the plastic waste management in India has the potential to create jobs in the country.

Also Read: Can India #BeatPlasticPollution With The Current Plastic Bans In Various States?

While speaking at a conference hosted by the European Union Delegation (EUD) on ‘Plastic Pollution and Management’, TERI expert Saurabh Manuja said that recycling plastic waste can create six times more jobs than simply dumping the plastic. Even the Environment ministry director Manoj Kumar Gangeya said that plastic waste management strategy is a priority for India.

Recently, the Union Environment Minister Dr Harsh Vardhan urged the people in India to minimize the use of plastic in everyday life, and also asked them to take “active measures” to protect and conserve the ecosystem.

“It (Plastic Strategy) aims to achieve a whole new, smart, innovative, sustainable plastics industry by 2030,” she stated.  Every year, Europeans generate 25 million tonnes of plastic waste, but less than 30 percent is collected for recycling. Across the world, plastics make up 85 percent of beach litter, she said in her presentation.

At the conference, a total of 10 European Union representatives shared best practices of plastic management in their respective countries.

Poland representative Konstancja Piatkowsk talked about extended producer responsibility saying it was introduced in her country in 2002 fixing targets of recovery and recycling of packaging wastes.

Dr Hafeez Raehman from Belgium highlighted that the country is one of the leaders in managing waste in the EU. “Almost 90 percent of the waste in Belgium is recycled and put to productive uses.”

Also Read: This 23-Year Old Has Developed A Machine To Collect 40,000 Tonnes Of Plastic Trash In The Great Pacific Garbage Patch In 5 Years

In terms of steps taken to beat plastic pollution, the Ministry of Environment, Forest and Climate Change has banned plastics in all protected areas around the country and has declared them as “plastic free zones”. Currently, the government is also in the process of drafting the plan and policies.

Also, the government has written letters to all the states and Union Territories (UTs) asking them to undertake a massive campaign against the use of single-use plastics and enforce rules to ensure elimination of plastic carry bags of less than 50 microns in thickness.

Also Read: Why The Crisis Of Microplastics In India Needs To Be Addressed Urgently

In addition to these steps, a digital campaign ‘Green Good Deeds’ has also been launched with an aim to encourage people to take anti-pollution measures such as planting a sapling and recycling waste, while the University Grants Commission (UGC) has directed all universities and higher educational institutions to not just ban the usage of single-use plastics on campus but to also encourage students to refuse, reduce, and re-use plastic product in their daily lives.