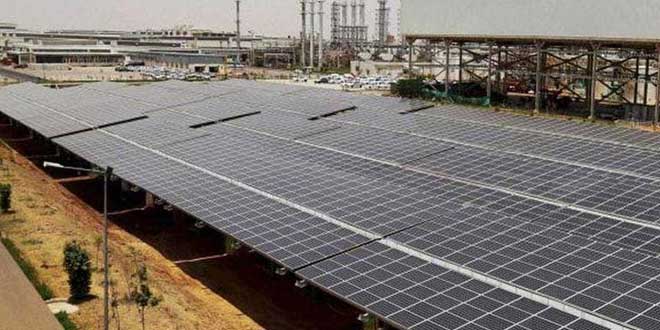 New Delhi: India’s largest car manufacturer is taking some serious steps to cut down its carbon footprint. The company, which has been using natural gas to meet 95 percent of its energy needs for the last 20 years is now planning to deploy solar energy for powering its manufacturing facilities at Gurugram and Manesar. Taking the first step in this direction, it recently laid the foundation stone of a 5 Mega Watt (MW) solar power plant in its Gurugram (erstwhile Gurgaon) plant.

Also Read: Centre For Science And Environment Pushes For Use Of Solar Rooftop In Residential Societies In Gurgaon

This is the company’s second solar plant, as the first solar power plant was set up on pilot basis in 2014 at Manesar, with 1 MW capacity. While talking about the solar project, PK Roy, Executive Director, Production, Maruti Suzuki India Limited told NDTV,

With the new solar power plant, the company aims to reduce its carbon footprints by offsetting 5,390 tonnes of carbon dioxide annually out of a total emission of 4,55,765 tonnes produced by it annually. The plant is expected to help the company to cater to its internal energy needs. The company is continuously exploring ways to reduce energy consumption and increase energy efficiency in the manufacturing facilities, thus driving down greenhouse gases emissions.

As per Mr. Roy, the photovoltaic solar panels of the new solar plant will be designed in carport style which will work as a roof at the car parking area. According to the experts, in recent years solar carports have gained popularity in the field of renewable energy as these allow access to large parking areas for the purpose of producing electricity, while also providing a shaded or covered area to park the cars safely. Large energy guzzlers like airports have also started using the carport model for their renewable energy projects.

Solar energy is abundant, versatile and efficient. This solar power initiative is in line with the Company’s philosophy to adopt environment-friendly technologies and lower carbon dioxide emissions. Through this solar power plant facility, we will harness renewable energy for our business needs over the next 25 years.

Talking about the impact of an organisation as big as Maruti taking a green route and adopting solar energy, J.P. Singh, an expert at Consultants for Solar Energy and Electrical projects said,

This Solar power plant project will reduce 1. 4 lakhs metric tons of Carbon emission over 25 years thus cutting a huge amount of greenhouse gasses and making the planet cooler and greener. Also, the impact of this initiative during its life time is equivalent to planting of more than three lakh trees. Not only this, it will also help the nation to achieve the targets promised by it in the Paris agreement which was signed by more than 170 countries as a declaration of agreement to adopt renewable energy to combat the rising temperature of the planet. India has made tremendous progress in solar energy by making its capacity 10 times in last one decade to keep up its commitment for environment and such initiative of Maruti for installing large plant like 5 MWp plant do contribute in strengthening the commitment. This large plant would also contribute immensely in India’s ambitious vision of putting up 100 GW of solar plants by 2022 which has reached only 31 GW by now.

Also Read: Gurugram, One Of India’s Most Polluted Cities To Get Its First Public Electric Vehicles Charging Station Soon

Mr. Singh lauded the company’s decision of adopting greener sources of power as being the industry leader in the automobile segment, it has set a great example for the fellow companies for adopting solar energy to the best possible extent.

According to Mandvi Singh, an expert from the Centre for Science and Environment, along with positive environmental impacts, the transition to solar power is also quite cost-effective. She said,

Apart from a feeling of being responsible towards the environment, what is driving solar adoption by corporates is the economics of it. This is because the power bought from the grid, for commercial and industrial consumers, is very expensive. The rates start from Rs. 10 per unit and goes as high as Rs. 17 per unit. This is why major companies like Maruti rely on alternatives sources of power. Like Maruti has captive plants in their manufacturing units that generate electricity in the unit itself using natural gas which is used in meeting the power demand of these units. But the gas supply is also uncertain and is becoming expensive. So for a longer run, investing in solar is more economical for bigger corporates.

However, Ms. Singh also pointed out that since the cost of installing a solar plant is quite expensive, many smaller companies are not investing in solar. She said,

On an average, the cost of installing solar plant for generating 1 kW of power is Rs. 50,000 to Rs. 60,000. Another deterrent for corporates is the technical requirements like installing solar panels, net metre, wiring among others for which most companies need to upgrade their infrastructure.

Mr. Roy added that the company is currently generating energy 95 per cent of the total electricity it uses from natural gas and the rest five per cent is met by solar energy and buying grid electricity from local discoms (electricity distribution companies). As per him, the use of natural gas for generation of electricity has helped the company in reducing carbon emissions but it is not a completely clean alternative. Thus, the company has started shifting to solar. While the company has not revealed its plans about its third solar plant, the spokesperson said that it will gradually strengthen the capacity of the existing plants in a bid to increase its dependence on renewables.

Along with using new and renewable energy for meeting the maximum of its energy needs, the company has undertaken other green initiatives. These include using energy-efficient LED (Light-emitting diode) lighting in manufacturing facilities at Gurugram and Manesar and the Research and Development Centre at Rohtak, using trains to transport finished cars across the country and using recyclable materials for making cars. Mr. Roy said,

We use railways for transporting finished cars to various cities of the country. In the last five years, around 5 lakh cars have been transported all over the country through rail mode offsetting over 4,000 tonnes of CO2 emissions. Maruti Suzuki is also one of the first companies to manufacture End Life Vehicles compliant cars, much ahead of the regulations being implemented in India. Simply put, WagonR and all upcoming models would be minimum 95% recoverable and 85% recyclable, ahead of regulations in India.

Apart from making green changes to its production process, Maruti Suzuki is also working towards making its market offering environment-friendly too. From upgrading its car engines to Bharat Stage VI (BS VI) that emit lesser pollution than the current BS IV engines to announcing the launch of a fully electric car by 2020, all these steps are a start that need to be doggedly pursued for making a dent in the air pollution crisis facing the country.