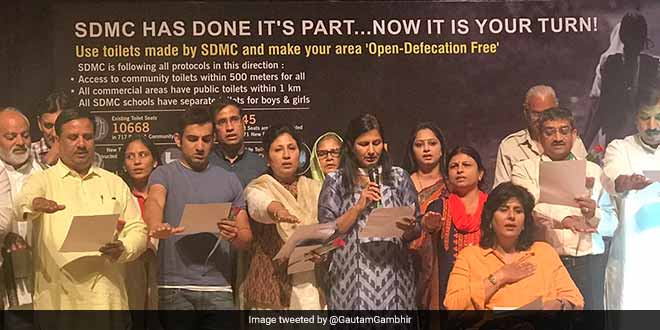 She was speaking at a function here to mark the culmination of the fortnight-long ‘Swachhata Hi Seva‘ campaign.

“SDMC has provided one toilet each within a distance of 500 metre as per the norms of construction of toilets under the Swachh Bharat Mission.

“We have also made available 1,099 toilets, including 250 mobile toilet seats,” she said.

Ms Sehrwat instructed the officers concerned to ensure the functionality and upkeep of the toilets and exhorted the people to properly utilise the facilities.

Pic is only half d story,real crux lies behind "SDMC has done its part,now its your turn!" Kudos SDMC for making south Delhi defecation free pic.twitter.com/GrGRxxZvsl

He added that separate toilets should also be provided to the girls keeping in view the empowerment of girls as per the message of ‘Beti Bachao Beti Padhao’. The cricketer also expressed his deep concern over people urinating in the open.

Mr Goel instructed the officers to launch a month-long campaign to ensure usage of the newly built toilets.

While appreciating the mascots of Swachhta – ‘Roko’ and ‘Toko’, Mr Goel asked to continue with the ‘Roko Toko Seeti Bajao’ campaign to deter any person from defecating in the open.

Cleanathon 2017: The Boy From Sherwood College Does It Again, Impresses Amitabh Bachchan With His Swachhta Poem