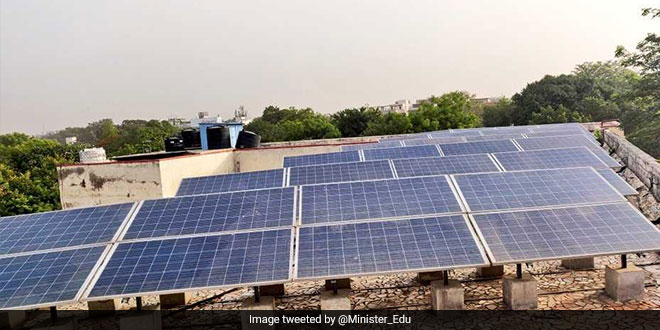 Ample availability of renewable energy power gives India an inherent advantage, it can be a global hub of green hydrogen, said PM Modi

New Delhi: India can become a global hub of green hydrogen as an ample availability of renewable energy gives the country an inherent advantage, Prime Minister Narendra Modi said on Friday (March 4). The prime minister also said that the country’s clear vision is that sustainable growth is possible only with sustainable energy resources. Addressing a post-budget webinar on ‘Energy for Sustainable Growth’, PM Modi said, “Ample availability of renewable energy power gives India an inherent advantage, it can be a global hub of green hydrogen.” Noting that the hydrogen ecosystem is interconnected with fertilisers, refineries and the transport sector, he called for innovation by the private sector in the field.

Hydrogen ecosystem is interconnected with fertilisers, refineries, and the transport sector. It is a field that the private sector must innovate in to fully utilise India’s potential. I promise the private sector that the government is with you in your efforts, he said.

Energy and sustainable growth are inspired from the country’s traditional practices and are a path for our future needs and aspirations.

PM Modi said he had encouraged sustainable lifestyle at the COP 26 summit in Glasgow last year along with the promise to become a net zero country by 2070.

In Glasgow, we promised to become a net zero country by 2070. I also encouraged sustainable lifestyle -the LIFE Mission – Lifestyle for Environment. By 2030, we aim to achieve 500-gigawatt non-fossil energy capacity and achieve 50 per cent of our installed energy capacity by non-fossil sources, he said.

“India is providing leadership in global collaborations like the International Solar Alliance. India has set itself some targets and we look at them as opportunities. Whatever targets India has set for itself, I do not see them as a challenge but as an opportunity. India is moving with this vision in the last few years and the same has been taken forward at policy level in this year’s budget,” he said.

The prime minister said that a lot needs to be done in making more energy efficient products, including household appliances.

Energy saving and production are equally important for sustainability. We need to do a lot more to build more energy-efficient ACs, heaters, geysers, ovens and similar appliances here in India, he said.

Batting for energy-efficient products, PM Modi gave the example of promotion of LED bulbs and said first the government brought down the cost of LED bulbs by promoting production and then 37 crore LED bulbs were distributed under the UJALA scheme.

LED bulbs used to cost Rs 300-Rs 400. Our government increased its production, which reduced cost. We have distributed nearly 37 crore LED bulbs under UJALA, saving a lot of electricity, money for the poor and carbon emissions, PM Modi said.

He said this has led to saving of 48,000 million Kilowatt Hour electricity and saving of about Rs 20,000 crore in electricity bills of poor and middle class families.

Annual carbon emission saw a decline of four crore tonnes. Local bodies are saving Rs 6,000 crore every year due to adoption of LED bulbs in street lights, he added.

He said energy storage is a big challenge and the government has given a big priority to storage capacity as well.

In this year’s budget, we have made provisions for battery swapping policy and interoperability standards. These will reduce problems faced in the use of electric vehicles in India, he said.

On ethanol blending, Modi said it has been prioritised in mission mode, adding that there was a need to further modernise sugar mills and distilleries.

He said technology upgradation was required in sugar mills and distilleries to produce by-products like biogas.

We have planned four pilot projects for coal gasification, and innovation is needed in this sector as well. Ethanol blending has also been promoted. We need to modernise our sugar mills and distilleries, he said.

Recalling recent inauguration of the Gobardhan plant in Indore, the prime minister said the private sector can establish 500 or 1000 such plants in the country over the next two years.

The prime minister talked about the future upsurge in the energy demand in India and underlined the criticality of transition towards renewable energy. Listing a series of steps in this direction such as clean cooking in 24-25 crore households of India, solar panels on canals, solar trees in household gardens or balconies, he said solar tree can possibly help in getting 15 per cent energy for households.

We need to take clean cooking forward as well. Solar gas can be a huge market for our startups, he said.

World is witnessing depletion of all types of natural resources. In such a scenario, a circular economy is the demand of the hour and we have to make it a mandatory part of our lives, he said.

The webinar, the ninth in the post-budget series, was also attended by the ministries of external affairs, coal, power, petroleum and natural gas, environment, and new and renewable energy.

Related Topics:
Environment Sustainability
Up Next

World Wildlife Day 2022: What You Need To Know