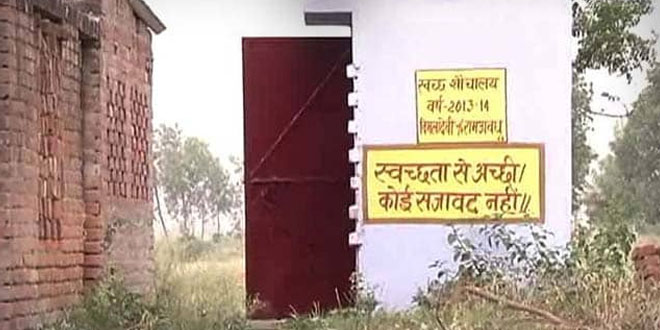 Gandhinagar: The Comptroller and Auditor General (CAG) has said that the government’s claim of Gujarat being ‘Open Defecation Free‘ (ODF) appears to be wrong, as many rural households were found to have no toilets. In a survey conducted in eight districts, nearly 30 per cent of houses were found to have no toilets, said the CAG report tabled in the state Assembly on Wednesday (September 19). The Union government had informed the Lok Sabha in February this year that 11 states including Gujarat have been declared as ODF under the Swachh Bharat Mission (SBM).

“The state government declared all the districts of Gujarat as ODF by October 2, 2017. However, information provided by 120 test-checked Gram Panchayats under eight selected District Panchayats for the period of 2014-17 revealed that 29 per cent households still did not have access to toilets (individual or public),” the CAG report said. “Therefore, the claim of the state government that all the districts of Gujarat were ODF did not appear to be correct,” it said.

The survey was conducted in the districts of Dahod, Banaskantha, Chhotaudepur, Dang, Patan, Valsad, Jamnagar and Junagadh. Of the total of 54,008 households in eight districts,15,728 households had no access to toilets, the CAG said. “Audit observed that the administration had declared all the districts as ODF on achieving the targets set out in the baseline survey conducted in 2012,” noted the CAG. “However, this list was not updated after 2012 and therefore, a number of households did not have any access to toilets and they remained uncovered,” said the report.

When the issue was raised with the state government in March 2018, the authorities claimed that all the villages are now ODF, as more toilets were built later “through CSR(corporate social responsibility) initiative”. However, the CAG noted, auditors observed that people were still not able to use toilets due to various reasons. In 41 out of the total 120 test-checked villages, the toilets constructed under the Swachh Bharat Mission could not be used as there was no water connection, it said. In 15 villages “toilets were not being used either due to non-availability of water and soak pits or they were incomplete”, the report said. In tribal-dominated Kaprada tehsil of Valsad district,over 17,400 toilets were found to be “defunct”, it said.

In his response to the CAG, the Assistant Commissioner(SBM-Gramin) stated that “2,529 of 17,423 defunct toilets had been newly constructed and put to use as of March 2018.” But the CAG said the reply was “not tenable as a significant number of households were either without toilets or not able to use them due to non-availability of water or incomplete structure”. It recommended that the government cover all the”individual households left out to ensure that everyone has access to toilets”.

Global Waste Could Grow By 70 Percent By 2050 As Cities Boom, Warns World Bank

Committee On Waste Management In Delhi Should Have Specific Time Line: SC