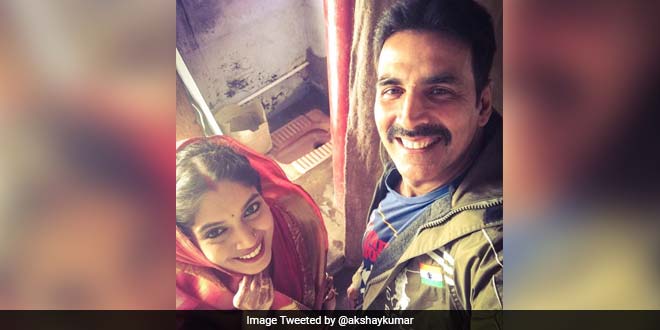 Mumbai: Actor Akshay Kumar says the research work for his upcoming project “Toilet – Ek Prem Katha” has opened his eyes towards the plight of women who have to go to open fields to relieve themselves. Stressing on the importance of personal hygiene and health, the actor says keeping the house clean and health of one’s family on priority is first step towards attaining the dream of “Swachh Bharat“. The actor took to Twitter on Friday to share an over six-minute-long video titled “Soch Aur Shauch”. And says he was shocked by the findings of the research.

He said: Friends, ‘Swachh Bharat’ is only possible when ‘ghar’ is swachh and ladies of our family are healthy.

He said: I initially wondered if I should talk about this, as I knew many would point out that I am doing this video only for the publicity of my upcoming film. And, you are right. I am doing this film ‘Toilet Ek Prem Katha’, and I do want as much publicity as possible for this particular topic.

The actor added: Why should I care about what others think? I feel that thoughts and faeces are both similar. There is no way that you could stop either. It is nature’s call that you have to answer.

He understands the topic might disgust many people, but urged them to watch the video, and brought into light some facts like “Imagine in a super power country like India, more than half of the population especially women can’t go to toilet when they feel the urge because they don’t have toilet in their home”.

They have to go to open fields because they are family’s respect. They have to go before sunrise, and in case they miss that time they have to wait for the sun to go down to relieve themselves, said Akshay, adding that men do not have to go through the same struggle to attend to nature’s call.

The father of two also asserted that it leads to several diseases, which then get transferred to children and they die because of them.

He asks: Is this is our culture?

When you can have kitchen and bedroom under one roof, then why not a toilet? All of this is the result of the direction we think in. Fifty four per cent of the people in our country do not have toilets in their homes and India tops the list globally for unhygienic sanitation practices. The government has built public toilets but these buildings are being used as animal sheds and what not, said the “Rustom” star.

Akshay feels it is wrong to put everything on the government, and just keep waiting.

We go to temples, churches, mosques or any holy place and donate money, why can’t we use the same donation to build toilets for poor people? he asked.

The actor also urged all the people who watched the video, but don’t have a toilet in home to get them built.

Government To End Open Defecation In Goa By 2019