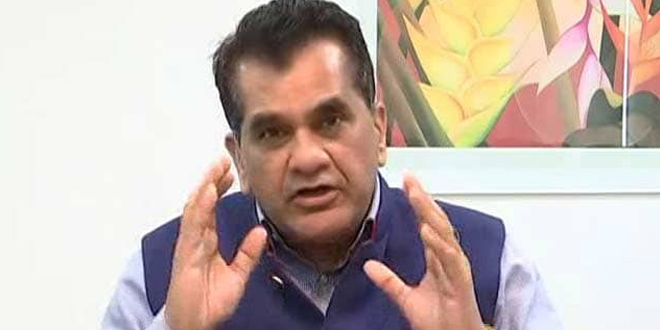 New Delhi: “It is not possible for India to grow at a higher rate without focussing on health and sanitation”, says Amitabh Kant, Chief Executive Officer of NITI (National Institution For Transforming India) Aayog while talking to NDTV about various aspects of health care in India, at the launch of NDTV-Dettol’s Banega Swasth India Campaign on August 19. He further added that in order to improve the status of health in India, all the states and Union Territories (UTs) must be evaluated on various health parameters, the information thus collected should be used to rank the states and UTs in order to reveal their performance on improving healthcare and nutrition.

Emphasising on the importance of ranking the state Mr. Kant said,

A lot of work is still needed to be done on health. It is not the shortage of resources or shortage of food but several governance issues like late tranfer of funds that hamper the delivering of adequate quality health services. Thus by ranking states, by naming and shaming them, we can nudge them to improve healthcare services more seriously and improve their health index.

He said that the government is aiming at increasing health standard and nutrition in the whole country for which it is focusing on increasing the numbers and quality of primary health and wellness centres. He stated that around 1,50,000 primary healthcare centres (PHCs) have been established across the country and claimed that the Central government’s ambitious National Health Protection Scheme covers more population than the population of USA, Europe, and Mexico put together.

Mr. Kant asserted that because of the central government’s efforts, significant changes in health parameters have been observed in the 115 aspirational districts or the most backward districts in the country identified by the government. He said,

He said that by ranking the states and UTs, there will be a real-time competition taking place among the governments as the information will be updated on the website continuously and a report will be made at the end of the year to analyse the growth in health indicators of each state. He asserted that this will encourage them to become better and bring in change in India in the long run.

For ranking the performance of the government in each state and UT in providing healthcare to the people, NITI Aayog has developed a health index report in collaboration with the Ministry of Health and Family Welfare and the World Bank. The health index report named, “Healthy States, Progressive India- report on the Ranks of States and Union Territories” is the second report released by NITI Aayog under the process of ranking the performance of state governments across the country which aims at informing the people about the status of each state on various health indicators.

In this report, NITI Aayog has measured the performance of states and union territories based on 23 health indicators including fertility rate, low birth weight, sex ratio at birth, tuberculosis (TB) treatment success rate, full immunisation, number of vacancies of doctors, number of ASHA (Accredited Social Health Activist) workers, and quality of public health facilities among others.

In order to ensure comparison among similar entities, the ranking was done under three categories — larger states, smaller states and Union territories (UTs). As per the report, Kerala is the best-performing state which has also been best in health performance historically. Kerala was followed by Andhra Pradesh and Punjab. Uttar Pradesh was the worst-performing state among large states. Mr. Kant said that Rajasthan, Haryana, and Jharkhand were not in the list of top-performing states but have made an incremental improvement in their performance. Among the small states, Mizoram secured the first position while Tripura was worst-performing. Chandigarh secured the top spot among Union territories, and Daman and Diu was at the last spot of ranking. 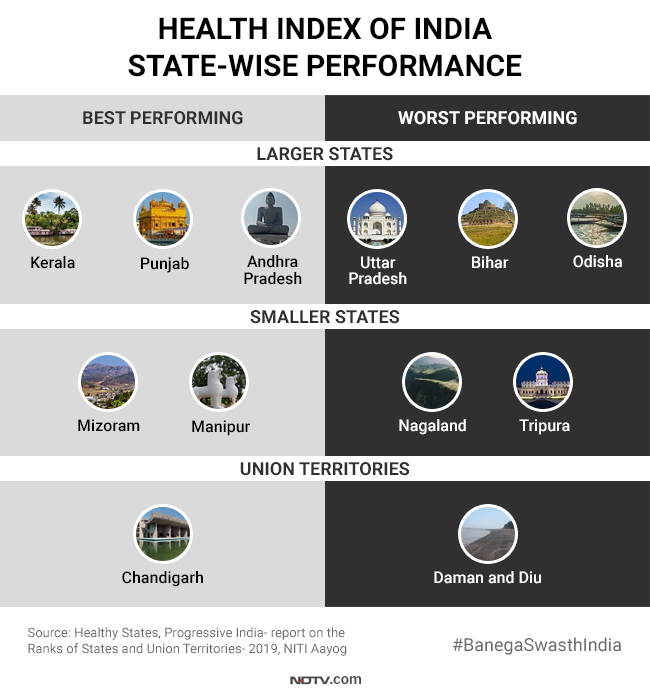 In his concluding remarks, Mr. Kant said that bringing behaviour change on the matter of health and nutrition is very critical like having institutional deliveries, initiation of breastfeeding in the first hour of birth and exclusive breastfeeding in the first months of birth. He suggested that leader at the regional levels and religious leaders should be involved in making people aware about important health practices.