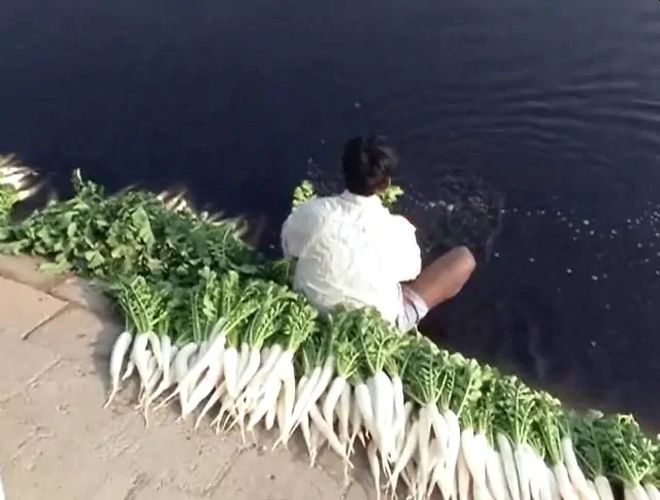 New Delhi: Dangerous level of metals have been found in vegetables grown in fields along the River Yamuna which could cause life threatening diseases like cancer, a study has found. According to the study conducted by the National Environmental Engineering Research Institute (NEERI), samples from three east Delhi locations were collected to check status of metal concentration in seven vegetables — cabbage, cauliflower, radish, brinjal, coriander, fenugreek and spinach. The vegetable samples were picked up from Usmanpur Khadar, Geeta Colony and Mayur Vihar and were tested for the presence of metals like Lead (Pb), Nickel (Ni), Cadmium (Cd) and Mercury (Hg).

Also Read: National Green Tribunal Panel Asks UP, Haryana To Coordinate With Delhi On The Issue Of Idol Immersion

The report found the maximum lead contamination in coriander collected from Geeta Colony. The safe limit for lead in vegetables is 2.5mg/kg as per the Food Safety and Standards Authority of India (FSSAI). The level of the metal detected in samples collected from the floodplain ranges from 2.8mg/kg to 13.8mg/kg, it said, adding heavy metal toxicity can damage organs. The study, conducted by NEERI on the directions of National Green Tribunal said,

Prolonged human consumption of unsafe concentrations of heavy metals in foodstuffs may lead to disruption of numerous biological and biochemical processes in the human body. Heavy metal toxicity can lower energy levels, damage the functioning of the brain, lungs, kidney, and liver. They can also damage the blood composition and other important organs. Long term exposure of metals may even cause cancer.

The report said that other metals – cadmium, mercury and nickel were found below the FSSAI standards. The NEERI said,

In the present study, only levels of lead were found exceeding the FSSAI limits in most of vegetable samples, therefore, there is need for further investigation on the sources, from where Pb is getting accumulated in the vegetables, though corresponding soil samples also exhibited high levels of lead. Possible sources of lead are industries dealing in automobiles, battery, paint, polythene, pesticides and lead processing unit.

It also suggested monitoring and testing of heavy metals in vegetables as well as soil and irrigation water along with water of River Yamuna should be done by concerned authorities on a regular basis. The study was included in the second interim report prepared by the NGT-appointed monitoring committee for the rejuvenation of the River Yamuna and abatement of pollution. It was submitted before the tribunal in May this year.

From Cow Dung To Clay, Idol Makers Prepare For An Eco-friendly Ganesh Chaturthi