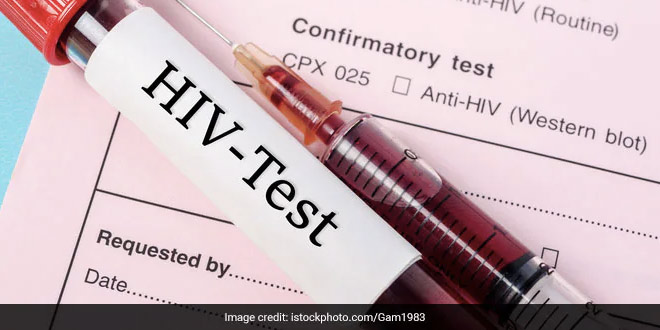 According to experts, the only way to know for sure whether a person has HIV is to get tested

New Delhi: According to experts, the only way to know for sure whether a person has HIV (Human Immunodeficiency Virus) is to get tested. The National AIDS Control Organisation (NACO) under the Ministry of Health and Family Welfare of the Government of India says that timely diagnosis of HIV can save lives. However, no one can be forced to undertake HIV screening, says NACO adding that the testing can be done only with informed consent after the person has undergone pre-test counselling for any of the following – behaviour change, clinical purposes, seroprevalence studies, ensuring safety and research.

What Is An HIV Test?

To detect if a person has contracted the virus, commonly used HIV tests detect the antibodies produced by the immune system in response to HIV, as they are much easier (and cheaper) to detect than the virus itself, says UNAIDS.

According to Dr Sashidhar Reddy Gutha, Consultant Physician, Yashoda Hospitals in Hyderabad, detection of anti-HIV antibodies is the backbone of testing for HIV and diagnosis of HIV. He said that the presence of antibodies indicates if the individual is infected with HIV and can transmit the infection to others through unsafe behaviour. Dr Gutha added that for most people, it takes about a month for these antibodies to develop. For the purpose of routine testing or emergency testing before going for blood donation, surgical procedures, Rapid Kit test is undertaken and for further confirmation ELISA (enzyme-linked immunosorbent assay) and Western Blot tests are done. He added that all these testing procedures are performed on the patient’s blood or serum, Dr Gutha added. He further explained that if a person is HIV positive, then they also undertake HIV Viral Load Test and CD4 (cluster of differentiation 4) cell count.

When a specimen tests positive using one method, it has to be tested again by a different method to confirm the diagnosis, as per NACO guidelines. The guidelines further state that if a specimen has tested positive using two systems, it has to be tested again by using one more test. Only after being positive in all three testing methods, a person is confirmed to be having HIV infection.

Rapid Kit Test: These tests are most commonly used and provide results in 15-20 minutes. These tests do not require any special equipment and are simple to use as a pregnancy test but with a tiny sample of blood from the pricked fingertip. According to NACO most rapid kit tests available in the market are highly sensitive and provide accurate results. If the result comes positive, it is confirmed using another method of testing.

ELISA (Enzyme-Linked Immunosorbent Assay): When a person gets HIV positive results through Rapid Kit test, they are tested with another method for confirmation called the ELISA method which usually takes 2-3 hours to yield results. If antibodies to HIV are present (positive), the test is usually repeated to confirm the diagnosis. If ELISA is negative, other tests usually are not needed. ELISA tests use either HIV antigens or antibodies attached to a special kind of paper called nitrocellulose paper to find the presence of the virus.

Western Blot: It is another confirmatory test. In the western blot, the various HIV specific antigens are absorbed onto nitrocellulose paper. The antibody present attaches to the antigen on the strip and the antigen-antibody complex is then detected.

HIV Viral Load Test: Once a patient is confirmed positive, they are also required to do a test for HIV viral load. This test measures the amount of HIV in the blood. It is used to detect early HIV infection and to monitor the treatment progress. Three technologies measure HIV viral load in the blood: reverse transcription-polymerase chain reaction (RT-PCR), branched DNA (bDNA) and nucleic acid sequence-based amplification assay (NASBA). In all three tests, HIV is detected using DNA sequences that bind specifically to those in the virus.

CD4 (Cluster Of Differentiation 4) Cell Count: Along with the viral load, it is important to do a CD4 cell count which measures the immunity of the patient. If the CD4 count is less than 500, patients have the chance to develop infections. More the CD4, the healthier is the patient. But whatever is the CD4 count, the NACO guidelines STATE that the treatment should start as soon as a patient is confirmed HIV positive.

When To Get Tested After Possible Exposure?

A person should wait at least 3-4 weeks after possible exposure before being tested for HIV. It is because according to the World Health Organisation (WHO),

In most cases, people develop antibodies to HIV within 28 days of infection. During this time, people experience the so-called ‘window’ period – when HIV antibodies have not been produced in high enough levels to be detected by standard tests and when they may have had no signs of HIV infection, but also when they may transmit HIV to others. After infection, an individual may transmit HIV to a sexual or drug-sharing partner or for pregnant women to their infant during pregnancy or the breastfeeding period.

Where To Get Tested?

According to Dr Gutha, Rapid Kit tests are available at any hospital- small or big, Primary Healthcare Centre (PHCs), district-level hospital, private hospitals, government hospitals and Integrated Counselling and Testing Centres (ICTC) run by NACO in all districts. Thus, a person who needs to be tested can go to their nearest medical centre and get their tests done.

However, other tests like ELISA and Western Blot require laboratory procedures and are not available at all healthcare centres. Dr Gutha said that these are available only in district-level hospitals and ICTCs.

The Government of India provides HIV/AIDS testing and treatment completely free of cost. According to Dr Gutha, over 90 per cent of HIV tests every year are done at government-run hospitals, healthcare centres and ICTCs. In private hospitals, the ELISA test costs around Rs. 1,200 to Rs. 1,500; HIV viral load and CD4 count, which a person needs to take multiple times after being tested positive, costs around Rs. 3,000 to Rs. 5,000.