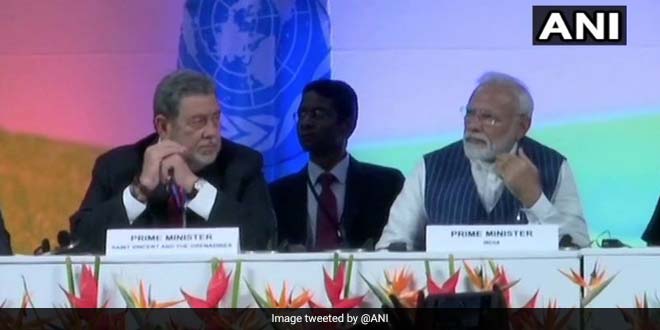 New Delhi: “I believe the time has come for even the world to say good-bye to single-use plastic,” said Prime Minister Narendra Modi as he asked the world to join India to end single-use plastic at a UN meet held in Greater Noida on Monday. He asserted that single-use plastic is one of the major causes of degradation of the environment. He was speaking at the 14th session of the Conference of Parties (COP-14) to the United Nations Convention to Combat Desertification (UNCCD).

He claimed at the conference that India will ban all kinds of single-use plastics in the coming years. He said,

According to the Central Pollution Control Board (CPCB), India produces over 25,000 tonnes of plastic waste every day. To curb the rising burden of plastic waste and pollution caused by it, PM Modi talked about the urgency to ban single-use plastic in the country on the occasion of Independence Day (August 15). While addressing the citizens during the recent episode of his monthly radio programme ‘Mann Ki Baat’, PM Modi again said that the country will need to move away from the use of plastic and a nationwide drive will be started in this direction on October 2 this yearo mark 150th birth anniversary of Mahatma Gandhi.

The ban is likely to be imposed on the use of six single-use plastic items like plastic bags, cups, plates, small bottles, straws and certain types of sachets. PM’s campaign against single-use plastic received wide support from politicians and celebrities who joined the PM in promoting environment-friendly alternatives to single-use plastic.

During his keynote address at the UN meet that focusses on finding strategies for reversing land degradation and desertification PM Modi highlighted that the younger generation in the country are increasingly coming forward to fight against the use of single-use plastic and it is through them that the government is trying to bring about a change. He also lauded the role of media in promoting the use of alternatives to single-use plastic.

PM Modi also laid out the country’s plan to fight environmental degradation as India takes up the charge of heading the Conference of Parties to UNCCD for a term of two years. During this period, India will be leading the developing countries to work towards eradicating single-use plastic, restoration of land quality, and water conservation.

To intensify the anti-plastic campaign PM Modi has is going to launch another initiative against plastic use under Swachhata Hi Sewa 3.0 which is likely to commence on September 11.

Fight Against Plastic: Vegetable Vendors In Agartala Join Hands Against Use Of Plastic Bags