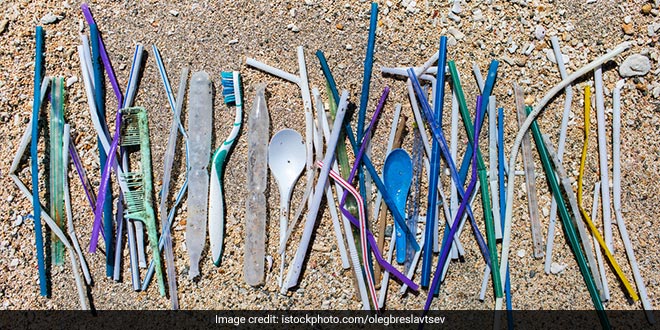 New Delhi: The war on plastic intensifies. After Prime Minister Modi called for everyone to say no to plastic during his Independence Day speech, some concrete steps are in the offing. A formal nationwide ban on six single use plastic items like plastic bags, cups, plates, small bottles, straws and certain types of sachets, are likely to be announced on October 2 to mark 150th anniversary of Mahatma Gandhi. Country’s national carrier Air India too announced a ban on plastic items across all its flights from Gandhi Jayanti. The fight against plastic has got support from the political fraternity.

Are you ready to make India free from single use plastic and pay tributes to Bapu on his 150th birth anniversary? #MannKiBaat pic.twitter.com/4APune12mS

I urge you all to stop the use of plastic bags while going out shopping. Instead, carry a cloth bag, which are long-lasting, Union Home Minister Amit Shah said while addressing a gathering in Ahemdabad on Thursday.

Mr. Shah said the Centre was mulling to take strong steps to stop the production of single-use plastic in a bid to save the environment and such an initiative (not using plastic bags) would help in saving the earth from plastic pollution. The minister’s appeal comes after Prime Minister Narendra Modi called for a revolution and mass movement against plastic waste, namely ‘Say No To Plastic’ from October 2 in order to make India a plastic-free country.

Prime Minister Narendra Modi has taken a resolve of Swachh Bharat. But, plastic is the biggest hindrance in realising that vision, he said and added,

That is why our PM, in his Independence Day speech, urged the citizens to take up a movement against plastic from October 2 on Mahatma Gandhi’s 150th birth anniversary.

I’m so happy that what we started in Maharashtra with a ban on single use disposable plastic is now a movement across India. Extremely happy for this.

I’m so happy that what we started in Maharashtra with a ban on single use disposable plastic is now a movement across India. Extremely happy for this. https://t.co/XDvSwUkIoW

Following PM @NarendraModi ji's Independence Day speech in which he gave a clarion call to shun use of plastic, Railways is set to roll out a complete ban on single-use plastic starting October 2, 2019.

Are you ready to make India free from single use plastic and pay tributes to Bapu on his 150th birth anniversary? – PM @narendramodi #MannKiBaat pic.twitter.com/yZd4n0aGiv

We Indians can do this…#SayNoToSingleUsePlastic

Minister of State for Railways in Karnataka, Suresh Angadi also backed the ‘say no to plastic’ movement by installing a plastic bottle crusher at the Bengaluru Railway Station. He termed the initiative as ‘another step towards single-use plastic free India envisioned by PM Shri Narendra Modi.’

It is estimated that one million birds and over 100,000 marine mammals die or get injured when they get caught in plastic or ingest it. A United Nations Environment report also highlights that only nine per cent of the nine billion tonnes of plastic the world has ever produced has been recycled. Most end up in landfills, dumps or in the ocean. The study also lists the most common single-use plastics found in the environment, these include cigarette butts, plastic drinking bottles, plastic bottle caps, food wrappers, plastic grocery bags, plastic lids, straws and stirrers, other types of plastic bags, and foam take-away containers. Even though nearly 26 states and UTs in India imposed a blanket or partial ban on plastics, the ban remains ineffective in the majority of the states as there is widespread availability of and demand for polythene bags.

From Karan Johar, Sachin Tendulkar To Amit Shah Among Many Who Lend Support To PM Modi’s Fit India Movement