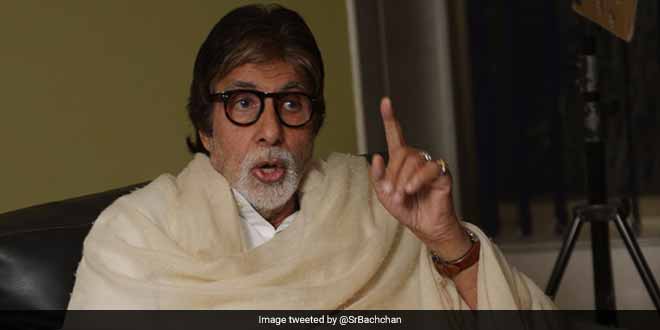 New Delhi: “Open defecation is a call for various diseases, and, our children can die because of it,” says Amitabh Bachchan as he appeal citizens of India to eliminate open defecation ahead of World Toilet Day through a video message. He adds, “Every year, I ask people to construct or use toilet. This time, I have a special and an important appeal. If you know someone who practises open defecation, go and speak with them. You have to educate them on why they need a toilet at home and how open defecation can kill them and their loved ones.”

Help them construct toilets, tell them how to use it, this small step by you can help India fulfill its dream of becoming a swachh nation by 2019.

Watch @SrBachchan’s earnest appeal to eliminate #OpenDefecation and the diseases emanating from it by building and using toilets. #WorldToiletDay pic.twitter.com/JbZetXJQPE

Since the inception of Swachh Bharat Abhiyan, more than 5 crore toilets have been constructed in India. 7 states, 228 districts and over 2 and half lakh villages have attained the tag of open defecation free. The sanitation coverage from mere 38 per cent in 2014 has now improved to 71 per cent. The achievement is significant, but, still the road to Swachh India is long.

According to a recent report, ‘The State of the World’s Toilets 2017’ released by WaterAid, India tops the list of the number of people who still do not have access to basic sanitation facilities. To be precise, 732 million Indians, 355 million women and girls still do not have access to safe and hygienic toilets. Out of which 60,700 children die each year because of harmful diseases caused by the practice of open defecation in the country.

So, if we want India to meet the swachh target, each and every one of us will need to come together and help India.

Taking A Step Ahead On World Toilet Day, Thiruvananthapuram Pledges To Improve Conditions Of Public Toilets

From Nukkad Nataks To Toilet Mela, Bihar Gears Up For World Toilet Day To Improve Its Swachh Ranking