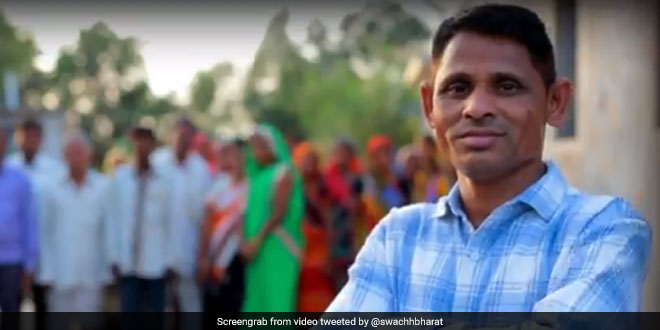 New Delhi: For 45-year-old farmer – Manilal Rana from Savaniya, a small village in Rajasthan, a trip to some of the big cities outside his state proved to be an eye opener. During a trip to cities like Ahmedabad in Gujarat and Mumbai in Maharashtra, Manilal discovered that toilets were a given in most households in these cities as opposed to his village where it is a regular practice for his neighbours to head to an open space, early in the morning with a lota (brass pot with water) in their hand. He wondered how great it would be if he could make his village in the Banswada district open defecation free (ODF). But the question was ‘how’?

As soon as a thought was born, I decided to work on it. We had to figure out two things before undertaking any activity – the reason behind lack of toilets and the number of toilets required. For the same, I joined hands with youth and led behavioral change. When we started the campaign, there were some 280 toilets in the village and we had to build over 700 toilets, says Manilal Rana, who already had a toilet at his place.

The problem in the district was the lack of awareness and the resultant recalcitrant attitude of people towards safe hygiene practices. Everytime Manilal would request villagers to construct a toilet, they would resist saying, “Our forefathers have been defecating in the open, why should we do things any differently”. The villagers would also oppose the concept of having a toilet inside the premises of their housestating, “We cannot have a kitchen and toilet together”.

Despite facing continuous resistance from villagers, Manilal didn’t lose hope. Though there were days when he would feel extremely demotivated and almost on the verge of giving up, it was support from some locals and the district collector that kept him going.

To bring about behavioural change, Manilal and youngsters resorted to relatable examples like how defecating in the open is a breeding ground for houseflies, which easily transit from hovering over fecal matter in the open to contaminating food and water inside homes. Once establishing the link between open defecation and spread of diseases, pushing the agenda of toilet construction became a bit easier.

Slowly and gradually, the whole exercise was turned into a ceremony. Every morning, the Sarpanch and Nigrani Samiti members, accompanied by a priest would visit households to mark the laying out of twin-pit toilet construction, tells Manilal Rana.

Things gathered momentum and one by one every household agreed to construct a toilet. In 35 days village Savaniya saw 780 toilets being constructed and attained the status of open defecation free (ODF). Today, the village has nigrani (supervision) committees to keep a check on open defecation to ensure that the ODF status is sustained.

Manilal Rana with a whistle in his mouth, keeping a check on open defecation

For his unwavering dedication to Swachh Bharat Mission, Manilal Rana became the only swachhagrahi from Rajasthan to be honoured by Prime Minister Narendra Modi at a the concluding ceremony of #ChaloChamparan initiative held in Bihar on April 10. This initiative was to mark the centenary celebrations of Mahatma Gandhi’s Champaran Satyagraha and kickstart the final leg of Swachh Bharat Abhiyan.

Manilal Rana now plans to inspire the youth, and seek their help to now expand the ODF movement to make neighbouring villages. The swachh warrior signs off with a message,

Construct toilets, be disease free and save money on medicines.

It was not easy for Manilal Rana of the Banswada district, #Rajasthan to drive behaviour change across communities. Using innovative techniques to make people realise the importance of #Swachhata did the trick. We salute him for his dedicated service. #SBM pic.twitter.com/UFT5wEr7Cd