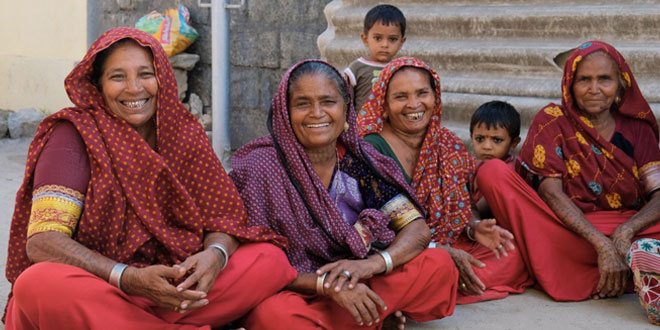 New Delhi: The story dates back to 2015 when Swachh Bharat Abhiyan (Clean India Campaign) focused on making the country open defecation free (ODF) by October 2, 2019, was at a nascent stage. During that time, Meena Devarao Bobade, Vice Chair, Ekta Mahila Sakshimikaran Sansthan, women federation of Chandrapur district, Maharashtra, sent out a special invitation for loans to self-help groups (SHG). In a first, loans were being provided for the construction of toilets. To Ms Bobade’s surprise, only 4 out of 22 applications for a loan from her village Pimpalgaon in Chandrapur were for toilets. It is then Ms Bobade took up the challenge of ensuring a toilet in every household and started by creating awareness about the importance of having access to sanitation at home.

From SHG meetings, village functions to social gatherings, Ms Bobade would talk about the role of individual household toilet everywhere she went but this didn’t go down well with the villagers who were used to defecating in the open. Recalling her hardships, Ms Bobade said,

I faced harsh criticism. People ignored and avoided me. To educate people on the need and importance of toilets, Ambuja Cement Foundation suggested me to organise a visit for women to nearby villages where toilets had been built.

Witnessing first hand, the toilets being constructed in the nearby villages and fellow villagers using it happily motivated residents of Pimpalgaon to construct toilets. Within three months, 85 per cent of households in Pimpalgaon had toilets and in eight months the toilet coverage stood at 100 per cent. 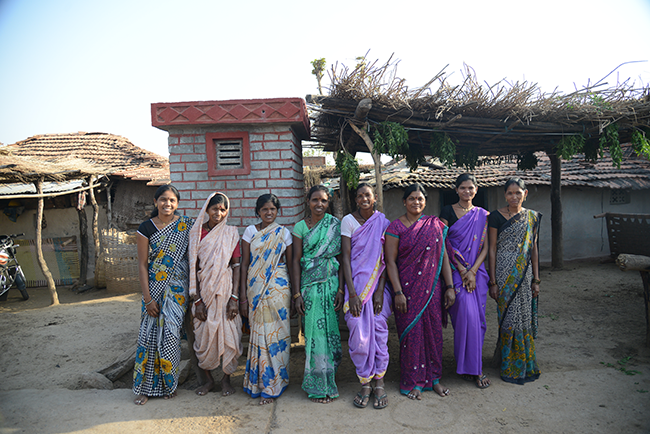 But, the fight against open defecation didn’t end at achieving 100 per cent coverage of the Individual Household Toilets. The next task was to make people use those toilets. For the same, Ms Bobade formed her ‘Good Morning Team’ – a group of women who guarded the common open defecation spots every morning. This caused a lot of uneasiness among villagers who even made threats. But the ‘Good Morning Team’ stood their ground and gradually change seeped in.

We had to even threaten women in the early days that if we find you defecating in open we will click a picture and share it with the community. Thus, the mindset changed and people started to build their own toilets, said 45-year-old Chandatai Ramgirwar, from Hardona Khu, Chandrapur.

The work of the members of Ekta Mahila Sakshimikaran Sansthan has resulted in the construction of 568 toilets and 18 villages attaining ODF tag. Similarly, Sorath Mahila Vikas Sahkari Mandali Ltd, women federation in Kodinar district of Gujarat has helped build 1,676 toilets and made 14 villages ODF. NDTV spoke to the members of the two women federations operating under the guidance of Ambuja Cement Foundation to understand how they mobilise people to adopt good sanitation and hygiene practices and ensure availability of funds.

A women federation is an umbrella covering hundreds of self-help groups. While Ekta Mahila Federation covers 45 villages and has 159 SHGs, Sorath Federation has 749 SHGs under its ambit. The two bodies provide women training on micro-credit and income generation activities linked with local banks. Since they are associated with Ambuja Cement Foundation, they are also playing a crucial role in promoting safe sanitation. 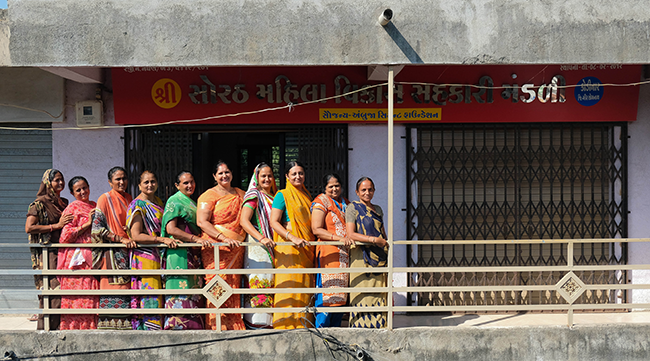 When we began our sanitation project in the Chandrapur location, the local women were exhausted dealing with the day-to-day problems due to open defecation practices in their villages. A survey conducted in 2011 in 14,839 households of 149 villages showed that only 34 per cent of the constructed toilets were in use, the rest being dysfunctional. Women and girls feared their safety and often avoided defecating during the daytime which had repercussions on their health. Also, there had been incidents of snake and insect bites that posed a huge danger for the entire community. Dysentery and water-borne diseases were also on the rise. Therefore, we took up the community sanitation project on urgent priority. The challenge, however, was not only the lack of toilet structures but also people’s lack of willingness to use it. Villagers had several misconceptions such as a toilet inside the house may bring bad luck to the family, or that toilet construction will be very expensive and hence unaffordable.

Ambuja Cement Foundation (ACF) felt an urgent need to encourage the community to build toilets and take ownership of it. To achieve this, ACF introduced the Community Led Total Sanitation program (CLTS) and started working on educating the community on the multiple and long-term social and financial effects arising due to lack of sanitation practices. For the same, ACF involved women belonging to self-help groups and federations as they are seen as frontrunners of social change.

Under the community-led total sanitation program, awareness campaigns, rallies, exposure visits to other villages where people were using toilets and reaping its benefits were organised to bust myths surrounding the usage of toilets. ACF also sensitised school children, a harbinger of change, bringing in additional support.

Throughout the campaign, women were at the forefront, leading the change. Explaining how they would encourage villagers to construct toilets, 41-year-old Hansaben Jadhav from Sandhanidhar, Gujarat, said they would call a village meeting and discuss the reasons behind not having an individual household toilet. One of the reasons people would give was a lack of financial support to build and maintain a toilet. Ms Jadhav added,

We ask them that if you have a TV, mobile phone, motorcycle at home then why not a toilet? During awareness sessions, we conduct a demonstration where we take two glasses of water – one having clean water and the other filed with yellow water depicting excreta. We dip a hair strand into the yellow water and then put it into a glass of clean water. Following this, we ask people, will you drink this water and they straight away say no stating it’s unclean. We explain that in a similar way a fly sits on the human excreta in the fields and other open defecation spots in your surroundings and sits on your food and water.

Both the federations were already working towards improving the sanitation status of their villages but Swachh Bharat Abhiyan gave a big push to the idea and started a movement, said ACF. Under its ODF campaign, the government also provided Rs. 12,000 per household for the construction of an individual household toilet which further motivated people to adapt to the change. 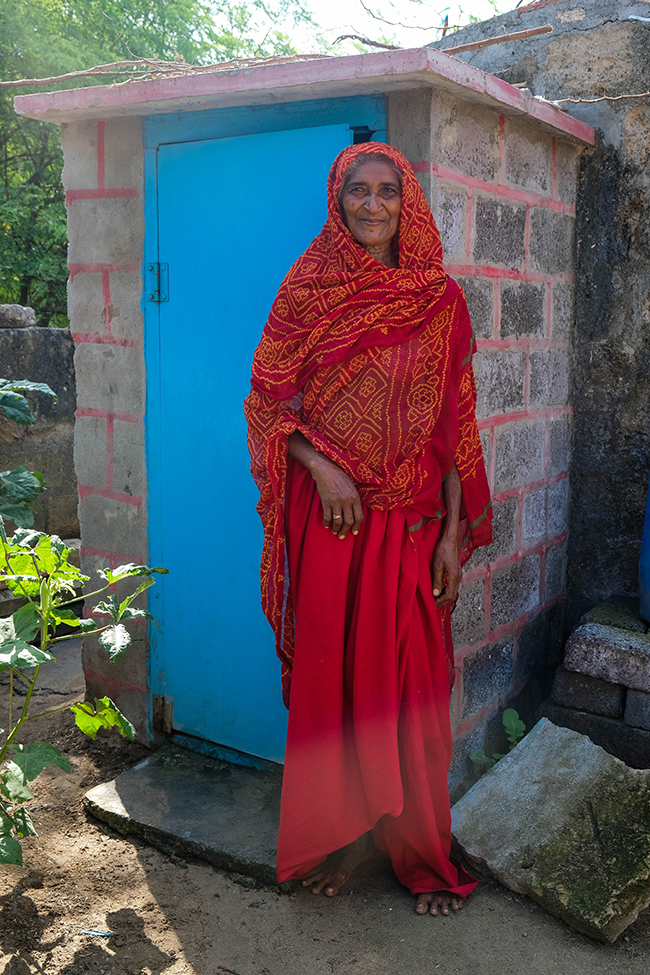 An elderly woman standing with her newly constructed toilet

Ekta federation even mandated the construction of toilets for its SHG members if they wanted to take a loan for any other purpose. ACF believes the strategy worked very well in creating urgency for the issue.

Before signing off, Pearl Tiwari from ACF, shared the challenges and learnings of the project and said,

There were technical challenges like villages not having a proper drainage system which came as a roadblock during the construction of tank toilets. One of the federations had signed a Memorandum of Understanding (MoU) with the government as part of which a subsidy of Rs. 12,000 would route through the federation. Here the challenge was of change in government guidelines and toilets not meeting specified guidelines because of which the subsidy would get delayed.