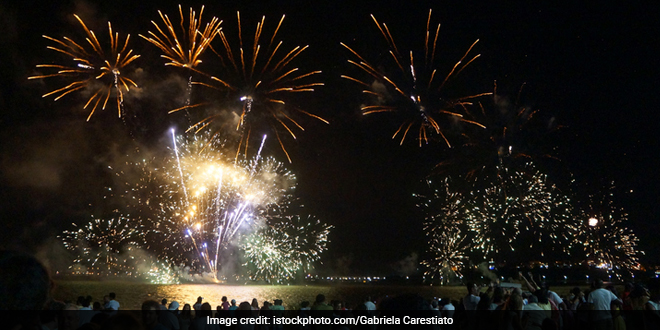 New Delhi: The Tamil Nadu government has decided 6 am and 7 am and 7 pm and 8 pm on Diwali as the time slots during which people would be allowed to burst firecrackers on Diwali. This is in line with the Supreme Court directive on October 23 curtailing fireworks to two hours on the day of the festival to keep a check on air pollution. According to a statement released by the Tamil Nadu government, it has also urged people of the state to burst crackers with low decibel and pollution levels. Further, it asked the people to avoid bursting firecrackers near hospitals and places of worship. The Tamil Nadu Pollution Control Board has also decided to keep a track of the air quality seven days before and after the festival which will fall on November 6.

After the apex court announced its order on firecrackers, Tamil Nadu government and firecracker manufacturers had requested the Supreme Court to allow bursting of crackers on Diwali morning, besides the already permitted period between 8 pm and 10 pm. The petition by the Tamil Nadu government said that the state should be allowed to burst crackers between 4.30 am and 6.30 am as well. In its petition, the government said each state or sect has a separate set of beliefs and traditions as far as Diwali celebrations are concerned and the top court’s restriction would amount to “rejecting the people with their due religious rights and would subject the people of the state into much hardship”. In Tamil Nadu, a South Indian state, the festival of Diwali is celebrated early in the morning to commemorate the death of Narakashura, according to the plea.

The apex court then modified its earlier order of defining 8-10 pm as the only slot to burst crackers on Diwali, saying the time would be changed in southern states like Tamil Nadu and Puducherry, but will not exceed the two-hour duration. Supreme Court also ruled that while in other states existing stock of firecrackers, which may not qualify as ‘green crackers’ can be sold, in Delhi–NCR only crackers that are eco-friendly with low emissions, toxins and decibel levels, will be allowed in the two hour time period.

Meanwhile, the Tamil Nadu Fireworks and Amorces Manufacturers Association (TANFAMA) decided to file a review petition against in the Supreme Court order putting restrictions on firecrackers that can be burst this Diwali. The General Secretary of TANFAMA opposed the ban on the use of Barium salts in the production of fireworks. He said

Banning the usage of Barium salts in manufacture of firecrackers which would affect nearly 40 per cent of the industry’s production.

Nearly 90% of the country’s fireworks production is done in Sivakasi town in Tamil Nadu.

With inputs from Press Trust of India