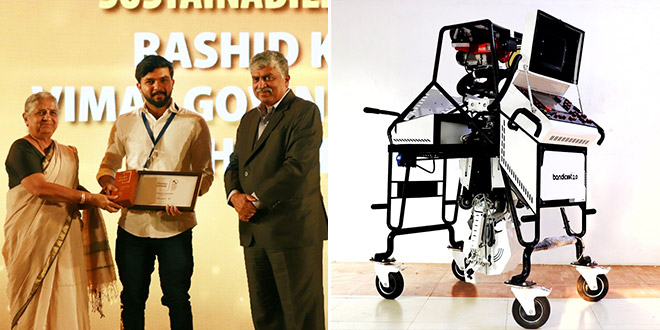 New Delhi: “We are on a ‘mission robohole’ – taking out man from the manhole and replacing it with a robot and in turn saving human lives. We wish to deploy the robots in all corners of the nation and eventually eliminate manual scavenging, a practice which was made unlawful in 1993”, says Arun George, co-founder and Director of GenRobotic Innovations Pvt Ltd, after winning the Aarohan Social Innovation Awards 2019 presented by Infosys Foundation for their creation ‘Bandicoot’.

Developed by Kerala based GenRobotics, Bandicoot is a pneumatic semi-robotic device created to clean sewers and manholes. It is stated to be the world’s first manhole cleaning robot with the aim of eliminating manual scavenging, saving humans from manhole accidents and adding dignity to human life.

Thank you @Infy_Foundation for supporting this mission to build a manual scavenging free India ????????.

A purse of Rs. 20 lakh is like a grant and comes as a support for us to do more research on this project and introduce upgraded Bandicoot robot. The money will be utilised mainly for research purpose, says Arun. 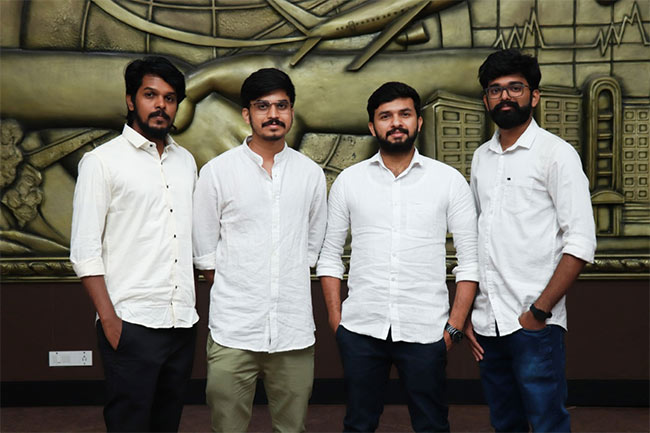 Founders of GenRobotic Innovations, a Kerala based company, parent of Bandicoot

After 26 years of its abolishment, manual scavenging should have become a thing of the past, but unfortunately, it is widely prevalent in various parts of the country. According to the data provided by Bezwada Wilson, co-founder of the Safai Karamchari Andolon, a non-governmental organisation that works for the eradication of manual scavenging, more than 2.6 lakh women are involved in dry latrine cleaning, around 7.7 lakh men are involved in cleaning sewers and septic tanks.

While working towards providing safe sanitation to public at large, these workers are exposed to toxic gases such as ammonia, carbon monoxide, and sulphur dioxide which directly impacts their health and often leads to death.

Also Read: Fighting To Abolish The Dehumanising Practice Of Manual Scavenging, Bezwada Wilson Says ‘No One Should Clean Excreta By Hand Just For Roti’

Mission Robohole is trying to change this by replacing humans with robots. Bandicoot, a spider shaped machine goes inside the manhole and sewers just like a human to clean it. Explaining how Bandicoot clean sewers and manhole in 20 minutes, Arun says,

Bandicoot has two units – first, the stationary unit that has the control unit requires a user interface, second, robot unit that goes inside the manhole. The spider like arms can enter deep into the manholes irrespective of its width and depth. The robot with four limbs collects the waste from the bottom of the sewage lines, remove clogs, and position itself with a jet pressurised with water to clean the pipes. Once scooped, the waste is dumped into a bucket attached to it. The robotic unit which mimics all the manual activities has waterproof night vision cameras, advanced technology, sensors and other control panels.

The team has also come up with Bandicoot 2.0, an upgraded version of the robot costing Rs. 32 lakh as opposed to the earlier version which was priced at Rs. 17 lakh. Elaborating on the advancement and the major reason for spike in the cost, Arun says,

On the basis of the feedback, we have made some changes like reduced body weight of the machine; increased waste carrying capacity; we have switched to carbon fibre to create robotic unit. Carbon fibre is non-corrosive in nature, light in weight and is highly durable as compared to any other metal. Various other parts of the machine are imported; when we go for high end material, the cost automatically increases. Also, the price of the machine involves the training of the workers and operation and maintenance cost.

According to the innovators, this robot can clean manholes more efficiently and effectively than a human using the most advanced technology. The compatible design of the robot lets it enter in even narrow lanes and its ability to converge its diameter by using its legs to enter into the unseen depths of the manholes and pull out the solid waste material is an added benefit. 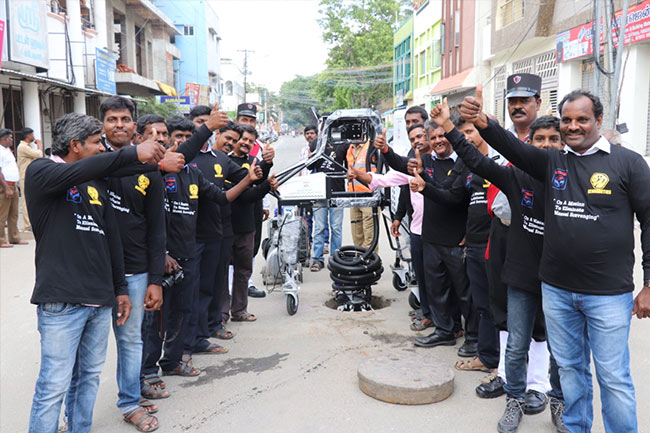 Bandicoot team along with the sewer cleaning machine

Bandicoot can also be used for inspection of manholes it has poisons gas sensors that let the operator know whether there is the presence of poisons gas or not. Two individuals – an operator and helper can easily run this machine, says Arun.

Bandicoot which was first introduced in Kerala in February 2018 is so far being used in 9 other states – Tamil Nadu, Andhra Pradesh, Maharashtra, Haryana, Telangana, Punjab, Uttar Pradesh, Assam, and Gujarat. The team has sold over 50 units and has trained over 900 sanitation workers to operate the machine onsite.

Earlier we had to go inside to clean the sewer now Bandicoot robot performs the same job and cleans it all. It has cameras attached to it which gives us a clear view of the inside – the amount of muck and blockage. It also has an arm that grabs sludge from all the corners. It is very easy to operate, said Sajan Kumar, a sanitation worker from Sri Muktsar Sahib, Punjab, in a video shared by Genrobotic Innovations on their twitter.

Now In Punjab #misionRobohole eliminating the worst condition of sanitation workers by #robotics and technology, to eliminate human intervention with waste
#SaveLives@RNTata2000 pic.twitter.com/3MnDVZ6dbA

Also Read: Manual Scavenging: 376 Die In 5 Years, Only Half Of The Families Given Compensation, Minister Informs Lok Sabha

In October 2019, Thanjavur corporation in Tamil Nadu received a robotic scavenging machine as part of Oil and Natural Gas Corporation’s (ONGC) corporate social responsibility (CSR) activity. Talking about how Bandicoot has enhanced scavenging operations in the town and made it easier for sanitation workers, P. Janakiraveendran, Commissioner of Thanjavur Municipal Corporation, said,

It is very useful to workers who are doing underground drainage maintenance work. Instead of going inside the manhole to remove blockages it helps them to do the work from above the ground.

Mr Wilson who was born in the family of manual scavengers and is on a mission to eradicate the inhuman practice believes the robotic machine cannot wipe out manual scavenging from India. He said,

This innovation is just a beginning and one step. Bandicoot robot cannot travel between manholes. The quantum of the problem is such that one initiative or innovation cannot turn the tables. The major problem is that the government has completely stopped even thinking about it. Individuals will come up with ideas and innovations which need to be appreciated but it’s government’s job to replicate or improve the model and bring a change.

Further talking about the cost of the machine and if a municipality can afford it, Ms Janakiraveendran said,

We can purchase it under Swachh Bharat Mission and can also fund it through UGD (underground drainage fee).

The prestigious award has boosted the team’s confidence, making them work harder towards eliminating manual scavenging from India and provide a dignified life to manual scavengers. The team is currently working towards mass production of the robotic machine thereby reducing its cost.